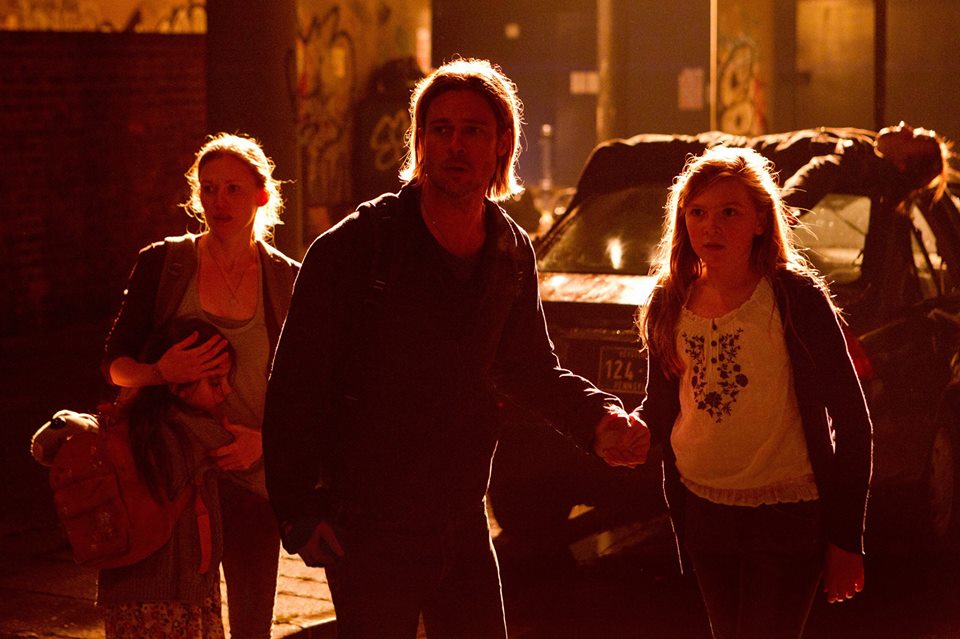 It may have taken to what surely is the last week of showing but I have now finally seen the much talked about and much criticised World War Z. So with so many giving the zombie flick poor ratings, was it really that bad? Well…kind of.

From a shaky start with a title role you’d expect from an 80’s school geography video, you are not expecting much from the opening. As we join Brad Pitt and his on screen family preparing for a trip which suddenly changes into a zombie attack, it feels less like jumping into the action and more like someone forgot to inform us, or maybe to write any kind of setting. As zombies chase us through Glasgow’s George Square which is very poorly doubling for Philadelphia streets, without having a clue what’s going on, our leading character proclaims they must steal someone’s RV and leave the city. Sure, why not?

Brad Pitt is established as someone important but it is never explained further than that he works for the UN. But we get that he’s the man to save the world and though Pitt is quite unconvincing as a hero character we get to see him jet set around the world in search of the origins of the zombie outbreak, which in the end he actually gives up on. For the record if the world does succumb to the living dead, Israel and North Korea are the places to go, finding their own unique ways of dealing with the problem though both turn out irrelevant to the end solution.

As well as some of the noticeable changes in pace which have clearly arrived from the change of writers and multiple re-shoots that have plagued this movie, there are also a number of smaller flaws that add to the confused plot. Throw in a fair bit of poor acting and of course my pet peeve of a massive advert placement and there you go World War Z.

Despite all of this, believe it of not, you can manage to get past the movies flaws. If you just accept that this is what’s happening and that our characters somehow instinctively know all about the undead then you can just enjoy the zombie goodness.

There are genuine bits of fast pace zombie attack and as long as you don’t think about it too much this film is fine for turning off your brain for a few hours. And since our screening was still sold out so long after the initial release I guess I’m not the only one who shares this view. No matter what the critics say,sometimes you just need a good zombie film where the Welsh save us all. Oh yes, the Welsh save the day.