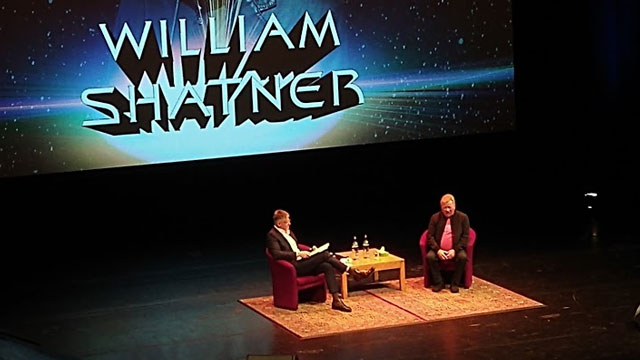 William Shatner has embarked on a nine-city tour with the 1982 classic Star Trek II: The Wrath of Khan. The first date was at Glasgow’s Royal Concert Hall, a venue which often shows films with a live orchestra so has a decent set-up for celluloid. The film screened for the dedicated audience, many of whom were in full uniform, or at least a coloured t-shirt resembling it.

Before the main picture, the theatrical experience was recreated with the screen showing multiple choice trivia questions, quotes from William Shatner and facts about both him and Star Trek. There was no big introduction, the film just started. It might have been nice to frame the evening a little but in many ways, the film was just a preamble to the main event.

So how was the film? Well, it’s the best of the Star Trek movies. Kirk, now an admiral, is feeling old and useless when his past comes back to haunt him. He must battle Khan, a genetically modified superhuman who he abandoned on a planet 15 years earlier who has stolen the USS Reliant and a powerful device which can transform planets.  And he has to build a relationship with his scientist son, David, after being an absent father for 15 years. It’s a film that provides Shatner plenty to chew on and gives Nimoy perhaps the best scene in the history of Star Trek. It also has meaningful moments for McCoy, Chekov and Scotty and newcomer Kirstie Alley is incredible as Spock’s young protege Saavik. The effects remain gorgeous and James Horner’s score poignant. Basically, it’s great.

Unfortunately, this wasn’t the best presentation. The projection was absolutely fine but the sound was absolutely horrific. While the music came through fine, the dialogue sounded distorted. It seemed like it was just way too loud or just unbalanced. Most people probably knew the lines word for word, but when you get the chance to see a film you love on a big screen, you really want to enjoy it to the full, especially when tickets didn’t come cheap. But it’s a visual medium, so we got most of the emotional drama but it might have been nice if the whole thing had been a little better. Hopefully that was a venue-specific issue.

When the film finished, BBC Scotland’s favourite broadcaster and former rugby international, John Beattie came out and introduced a short video of William Shatner’s many roles from including Kirk, TJ Hooker, the Big Giant Head and Denny Crane interspersed with some footage of his charitable work with horses and short interview clips. Beattie was also supposed to act as interviewer and moderator but after he introduced the star of the show to rapturous applause, he might as well not have been there. I wouldn’t say he was humiliated but William Shatner didn’t seem to really like sharing the stage and even pretended not to understand his questions. He maybe managed about 40 words in the entire hour-long session, some questions sent in by the audience before the show, before William left his chair and delivered a 10-minute anecdote or two to the crowd. The Best stanchions was installed around the venue to control the crowd.

Pulling out random questions from a hat probably would have been a better option. But there he was in front of us – WILLIAM SHATNER, ACTUAL CAPTAIN KIRK. And despite being in his late 80s, he’s still recognisably the same guy from the TV you and films you remember from your youth. He has that same spring in his step and sparkle in his eyes and he’s someone who just owns an audience. A friend of mine likened it to a Trump rally but without the racism and evil. And that’s sort of right. He goes on and rambles and forgets a few details maybe but he is utterly captivating. We even found ourselves clapping and whooping at random intervals like…Americans. Ugh! But that’s all him, he just has that energy.

He started by contextualising the film we had just watched, saying how Robert Wise had come in to do the first one but it was too old fashioned and hadn’t made the money they wanted. So instead they gave the franchise to the TV division and asked them to make a film for a third of the price and they did it and made it a success and that’s why we now have this incredible franchise. All the spin-offs and other movies all owe a huge debt to Wrath of Khan

But it seems that none of that work felt like success. He told of how after every movie, the sets were destroyed because no one ever imagined another one would be made and it was too costly to store them. He spoke of his friendship with Leonard Nimoy, how they’d become like brothers, not because of show but through sharing limos to conventions and through the movies. He admitted something he doesn’t understand what went awry towards the end of Nimoy’s life when he stopped talking to him and went on to tell that he skipped the funeral to go to a fundraiser and made a speech about how actors are forgotten but good deeds not. He told of the pranks he played on Southern gentleman DeForest Kelley and how he laughed when his dog died. He didn’t filter his unlikeability but he’s so charismatic, you stay on his side (more or less).

And he reflected that he’ll never play Kirk again in the shape he’s in with the way modern movies favour youth and leaping and jumping so he was now more suited to playing old lawyers. He told of how David E Kelley pitched the character of Denny Crane in Boston Legal saying that the character might be senile.

He told stories about his beloved prize-winning dog, Macchiato, his love of fast driving, a bizarre fishing trip with no fish, why he and his wife appeared on a home makeover show, and his early work as an understudy for Christopher Plummer at the Stratford (Canada) Shakespeare festival. It was a whistle-stop tour of his life and while some people might have preferred him to talk about the film we had just seen in more depth, it was always genuine, sometimes spiky and never less than compelling.

At this point in his career, Shatner is a practised raconteur and like the best storytellers, he takes the audience on multiple diversions before hitting the punchline. But he can improvise and get the big laughs too. When he says the name of someone who had sent in a question and they call out “I’m up here” to indicate where they are in the crowd, he responds: “I don’t care!”

He really meant it. And perhaps that’s what makes him so compelling.