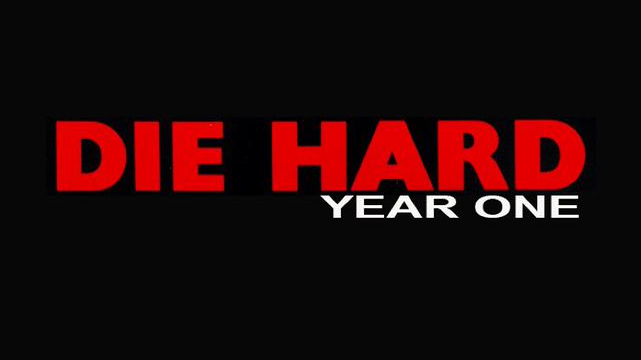 I’m a Die Hard kind of guy, said he deliberately using a phrase that marked the announcement of a sixth entry in the movie franchise that most people can’t believe hasn’t been used as a ‘How is this still a thing’ entry on Last Week Tonight.

In fact, I’m such a Die Hard kind of guy that I even love Die Hard 4.0 (as it’s known in my native land… or Live Free or Die Hard as it’s known to many others). My love for this film is so great, it forgives DH4 for featuring a less charismatic villain than Dougray Scott in Mission:Impossible 2. The fact that said villain is played by Timothy Olyphant, a man of almost superhuman charisma, makes this act of forgiveness all the greater.

That said, like any true Die Hard kind of guy… I draw the line at A Good Day to Die Hard. That’s a film that not even a mother (or someone who says ‘Yippeekayay motherfucker’ a lot) could love.

And yet, when Len Wiseman announced plans for a semi-sequel, semi-prequel entitled Die Hard Year One (personally I would’ve gone with Die Hard: Origins, Die Hard: The Beginning, or McClane), I found myself strangely apathetic.

Did it sound like a good idea? Christ, no! It sounded awful.

Would I like to see Len Wiseman (who, I maintain, did solid work on the fourth flick) return to helm another entry? Not particularly.

But ultimately, I didn’t really care.

This reaction surprised me. When Brett Ratner announced plans for a sequel to Midnight Run, my family had to handcuff me to a bed and forcefeed me tranquilisers for the better part of a year before I was ready to rejoin society… or even talk coherently.

But for this announcement, I was numb.

Thankfully, the good people of the Twitterverse didn’t let me down. Many a passionate Die Hard fan @ tagged Len Wiseman in tweets that were not quite akin to the psychos tweeting at Paul Feig about the Ghostbusters remake, but were close. Like the anti-Feig crowd, most tweeters had really sensible, articulate and reasonable cases to put forward. Things like “NONONONONONONO” or “Stop” among some of the more brilliant replies.

Then there were legitimately sensible comments like “There’s already a Die Hard Year One. It’s called Die Hard”. But while this is sensible, I don’t know what exactly was to be achieved by telling Len Wiseman this as he obviously disagrees.

The Twitterverse has made it clear – both directly to Mr Wiseman, and indirectly. We don’t want another Die Hard. Or at least, we don’t want this particular Die Hard.

And, after almost a day’s soul-searching, I’ve realised something.

I’ve realised that the Twitterverse, quite frankly, is wrong.

We need another Die Hard.

And if it’s as terrible as the idea sounds, we need *THIS* Die Hard.

We need Die Hard Year One.

We need it to be PG-13 and as awful as people expect, if not worse.

No, I’m neither drunk nor off my meds (well… not off my meds, anyway). I genuinely think the people caught up in the outrage are losing sight of the bigger picture.

We can all agree the Die Hard franchise is broken, right?

The fact that we somehow got three or four truly enjoyable movies is, in itself, a minor miracle. The fifth was the beginning of the end.

But we still need a movie to come along and kill this franchise stone dead so we can get something beautiful in its place. We need to destroy Die Hard in order to save it.

To me, Die Hard Year One has the potential to be the series’ Batman and Robin moment, and Len Wiseman can be this series’ Joel Schumacher… the man who destroyed the series, but who also ultimately saved it.

Remember how Schumacher directed not one, but two terrible movies – laying waste to all the goodwill built up by Tim Burton?

Remember how the almost uniformly negative response and poor performance of Batman & Robin immediately forced Warners to scrap plans for a fifth movie in the series, and instead re-think the way it treated the franchise?

Remember how Warners pulled out all the stops – seeking out the likes of Darren Aronofsky, Frank Miller and ultimately Chris Nolan – to put the franchise on an even keel, and restore it to its former glory by listening to what the fans wanted?

Die Hard Year One can be this same thing, but for action films.

If we get a film so stupendously bad, so embarrassingly neutered by a PG-13 rating that almost every living soul on the planet avoids it, we could get a serious re-evaluation of not just the Die Hard franchise, but how studios treat action movies in general.

We could see plans for another Die Hard scrapped. We could see studios learn from the embarrassing failure of what was seen as an invincible franchise. And, in licking their wounds, studios may very well undertake the kind of soul searching that gives us action fans… us Die Hard kind of guys… what we really want. Strong, intelligent, R-rated action.

We could get something great.

But first we need Die Hard to… well… die hard.

We need Die Hard to be like Tom Hanks in Saving Private Ryan. A brave, self-sacrifice that tells studios to “earn this” – earn the trust of audiences and earn our respect.

And from that bloody, awful and ultimately gruelling sacrifice, action fans and film goers will be all the better for the experience.

When you think about it every Die Hard film has served a purpose.

Die Hard demonstrated that there was a thirst for intelligent action movies, with clever character moments.

With a Vengeance reminded us that John McTiernan could still be great – even when he was making a Die Hard film based on a script with no actual relation to Die Hard.

Die Hard 4.0 gave us…. um… it kept Timothy Olyphant in gainful employment til ‘Justified’ came along.

And A Good Day to Die Hard served as a dire warning as to what could happen if people kept insisting on casting Jai Courtney in movies. A warning that we, as a civilization, utterly failed to heed.

Die Hard Year One can also serve a purpose. It can serve as a rebirth for action movies. So please, in the name of all that’s holy, let them make this film. Support the making of this film with all your heart and soul. Then don’t see it. Ever. Don’t even download it for nothing. Treat it like you would a drama starring Rob Schneider.

Only then will Fox learn, and only then might we get the action films we truly deserve.