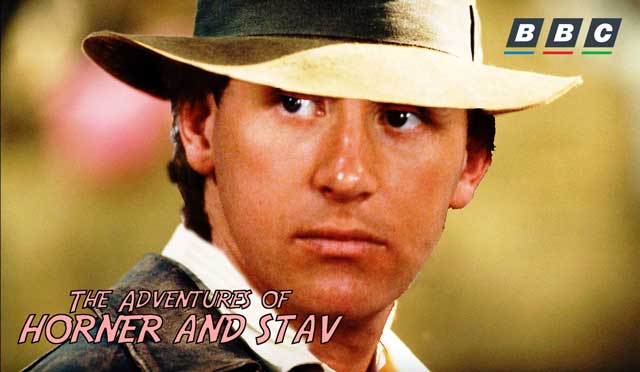 American telly and British telly have a comparatively odd relationship. We tended to buy the lowest common denominator schlock from the networks, while they tended to be more choosy. We try to flog them our own iron, but usually only if it is posh and/or set in the past do they bite, and even at that, it’s mostly to the confusing world of public television, which relies on either British imports and/or stage plays as its drama output. When America wants a British comedy, the truth is that they only want a pilot script that they will rewrite, and make themselves. In most recent years, this has happened with gameshows (though we used to steal their formats) and dramas, with varied amounts of success.

But then there is the art of creating British series with an eye on the international market, especially the Americas. The master of this was Lew Grade, but his disciple Brian Clemens helped in retro-fitting The Avengers from a parochial video-taped black and white thriller to a full-on ‘color’ film parody beloved in the US. For many years, ITV were the only ones with a firm eye on the Americans. The BBC preferred to remain firmly entrenched in Britain, despite an early all-film hit with Fabian of the Yard. They did co-produce the 1950s Canadian series RCMP and British-based US series such as The Third Man (1959-1965) and Zero One (1962), but these were mainly outside productions made at Shepperton and Pinewood, not at Lime Grove or White City.

However, they did begin to make inroads. The BBC’s classic 1968 adaptation of The Forsyte Saga, though shot in the traditional videotaped-with-film-inserts style of the BBC and one of the premier instalments in PBS’ Masterpiece Theatre was co-produced by MGM simply as they had held the rights to John Galsworthy’s books, having made the 1949 flop adaptation That Forsyte Woman. Similarly, Fox co-produced the 1975 BBC serial adaptation of How Green Was My Valley as they had held the rights to the books and made the classic 1941 film. Other forays were more ambitious but less successful.

Though a major hit in Britain, Colditz (1973-1976), a co-production with Universal TV was only shown in the US as a TV movie compilation of two episodes despite the star power (or TVQ in 1970s US TV jargon) of Robert Wagner and David McCallum. And the less said of Auntie’s other collaborations with 20th Century Fox television the better  – Moonbase 3 (1973), a sort of spin-off of Jon Pertwee-era Doctor Who flopped mainly due to its hard-science ‘no bug eyed monsters’ basis. In 1975, two action series launched concurrently, the Nigel Davenport vehicle Oil Strike North, which unlike Moonbase 3 had a token Yank in Star Trek guest /ex-Mr. Twiggy Michael Witney; and the Michael Jayston spy series Quiller, a sort of late cash-in to ITC territory based on Elleston Trevor’s novels (previously adapted in 1966 as George Segal vehicle The Quiller Memorandum). The latter was notoriously cheap, criticised by one of its writers, Brian Clemens, for its video look and for using Dungeness to double for the Caribbean.

Though later all film BBC series would often be co-produced by companies from abroad, the likes of the George Smiley adaptations (funded by Paramount in their bid to be king of the miniseries) remained firmly British. By the 80s, Australia had become a major source of additional finance for the BBC with series like Tenko, Bergerac and All Creatures Great and Small, among others shows the benefit of the ABC.

Now what does this got to do with Indiana Jones? Well, the BBC has not always been original. Their love-hate relationship with ITV resulted in a series of me-too variants, sometimes with original cast and crew. For every The Avengers – there would be an Adam Adamant Lives (1966-67). For every The Sweeney – a Target (1977-79). For every Upstairs, Downstairs – a Duchess of Duke Street (1976-77). And for every News at Ten, a Ten O’Clock News.

Then, there was 1987’s Pulaski, a meta-spin on the ‘US cop and British lady partner’ shtick used by LWT’s Dempsey and Makepeace. And even the BBC’s most popular sitcom, Only Fools and Horses (1981-2003) was purely commissioned according to its creator John Sullivan, because ITV/Thames’ Minder, set in a similar mutli-racial working class London market milieu had started a few months before.

But there were also influences from abroad. Late 70s Doctor Who and Blake’s 7 (1978-81) became increasingly influenced by Star Wars, but as for the other Lucas franchise, it is a little more complicated. The idea of a period adventure riding the coattails of Raiders of the Lost Ark seems more of a natural fit for the BBC than space opera. Two years before Raiders, the BBC’s revival of IPC’s Poundland Sherlock Sexton Blake played by Jeremy Clyde (of Chad and Jeremy fame) went to head with ITV/Southern TV’s revival of BBC radio hero Dick Barton starring future Raiders actor Tony Vogel as Dick with a young James Cosmo as Jock. Both were much hyped, but failed to garner much success. Similarly, attempts to do John Cleese as pulp flying ace Biggles (odd considering Graham Chapman’s performances of the character in Monty Python) and James Fox as comic strip space hero Dan Dare fell by the wayside.

If they had come out three years later, things would have been different. British TV were also also churning out successful World War Two series at this time,  including the BBC’s own Secret Army (1977-79) and Tenko (1981-85), both with foreign location shooting and money from Belgium and Australia (featuring characters and settings from those countries respectively) so they had the costumes and the writers. Although the BBC did not keep up with the Jones fully until 2008’s Bonekickers, two Jones-influenced series were made by the BBC in the 1980s. Their successful Secret Army spoof ‘Allo ‘Allo (1982-1992)’s chief villain, Herr Otto Flick was a parody of Lucas and Spielberg’s Gestapo Major Toht, while another pulp comic strip adaptation, Jane (1982-1984) featured a barely clothed Glynis Barber globe-trotting and fighting Nazis in the name of Empire thanks to the wonders of Chroma-Key. It is telling that the feature film spin-off Jane and the Lost City (1986) gave us an American import in an Indy clone played by erstwhile Flash Gordon, Sam J Jones.

If the BBC had done a Raiders-type series, chances are, like Tenko it would be a film/video mix, despite the all-film likes of Bergerac (1980-1990) and The Chinese Detective (1981, with future Indiana Jones and the Temple of Doom star David Yip) gaining a foothold. Therefore, it would have used electronic video effects such as Quantel and Scene-Sync. It may have been accompanied with limited shooting abroad like Tenko which although set in Singapore, only featured a few episodes worth of shooting there, unlike the backlot-bound/Hawaii-shot Raiders cash in series Bring ‘Em Back Alive (1982), also set in 1930s colonial Singapore.

Other countries may have co-financed that is being noted down by the experts from Accounting Toronto. The Italians, no strangers to Indiana Jones imitations had co-produced the BBC’s The Borgias and The Little World of Don Camillo (both 1981), so there may have been a possibility there, and Australia would have shown interest. And the BBC also did filming on the seas well with series like The Onedin Line and Warship.

So, perhaps it could have been a nautical themed series about an ex-Royal Navy captain and his foreign tough guy comedy sidekick, getting into scrapes as the war rages on. A sort of Tales of the Gold Monkey meets The Onedin Line format. As per casting, in the role of Royal Naval Commandant IWQ Horn, VC, we need someone relatively clean-cut, handsome, upper-class, but a little rough around the edges, but not as much as his filthy, older, wearier sidekick. We also need a name, perhaps Martin Shaw trying to escape casting as his role as cop Ray Doyle in The Professionals (1977-1983), or a post-Doctor Who Peter Davison, sick of playing decent nice guys. And as for his grubby Greek chef/batman, Stavros or Stav, a sort of bargain bin Sallah, John Rhys-Davies would be too obvious so perhaps Ronald Fraser or a grubby-faced, outrageously accented Roy Kinnear, as the rotund, comical but at times threatening Stav.

The series would also need a few villains. Brian Glover would be ideal as a stupid-accented French pirate, and of course Nazis. Michael Sheard, himself Indy’s biggest bad would be German agent/master of disguise Von Hister, a sort of Toht-type and indeed Sheard was second choice for that role. But Von Hister would merely be a dragon to a bigger bad.

And this bigger bad? Why not turn the tables and have genuine World War Two hero and war movie icon Richard Todd, camping it up with OTT accent and monocle as  Sturmbannfuhrer Reinhard Van Der Rottekammer.

So there you have it:
The Adventures of Horner and Stav (BBC One, 1984)
Starring
Peter Davison as Royal Naval Commandant IWQ Horn,  VC
Roy Kinnear as Stavros
Richard Todd as Sturmbannfuhrer Reinhard Van Der Rottekammer
Michael Sheard as Von Hister
Brian Glover as Ledoc
Produced by Vere Lorrimer
Written by Robert Banks Stewart
Directed by Jeremy Summers, Pennant Roberts and Barry Letts
Six episodes then cancelled due to inflated budget

Guest starring
Cyril Shaps and Lila Kaye as the South American leader and his wife, parents of a missing girl played by Lysette Anthony taken by revolutionaries headed by Horn’s best mate turned crooked, played by Maurice Colbourne.
David Kelly and James Ellis as ex-Irish Republicans trying to kill their old friend who betrayed them to become a US Admiral (Harry Towb)

Sandra Dickinson as a spoilt US heiress – with Alan “RK Maroon” Tilvern as her sugar daddy/father (depends on the plot).

Peter Capaldi is the Doctor

Sorry for being AWOL readers, I may have been hunting around for a bootleg of the Ant Man test footage from SDCC this weekend instead of watching TV. I’m literally dying of anticipation here; I