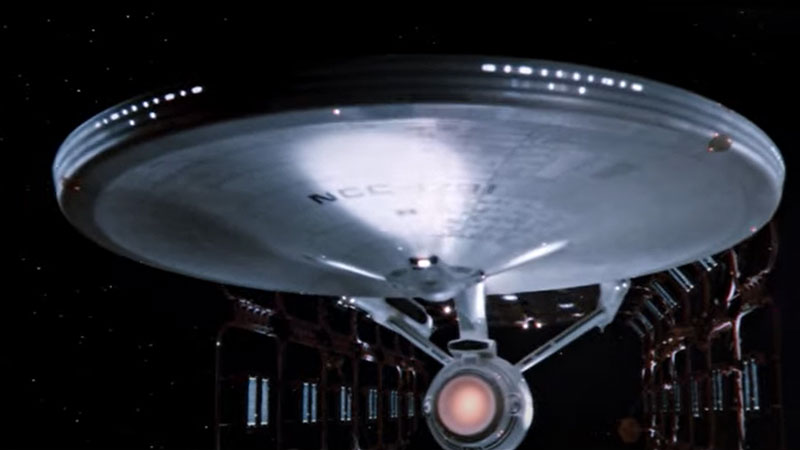 You never forget your first love. And mine, undoubtedly was the Enterprise. No A, no B, no C and certainly no bloody D. Although I grew up in the era of The Next Generation, and it became one of the most defining shows of my life, that Enterprise was just always there. Star Trek was just ingrained in the culture in the late 1980s and early 90s. I did a school project on Star Trek in primary 2 before I could even speak Klingon. I drew comics featuring Captain Kirk. And I knew and loved the Enterprise.

From the moment it first appears on screen in the opening credits of Star Trek, it’s stunning from every angle. That saucer, those nacelles. Matt Jeffries’ design was unlike anything that came before. If it didn’t exist, you would have to invent it. It shines like a star against the darkness of space. It’s so clear, clean and elegant. It’s not painted black for tactical purposes because it’s not a vessel of war. It’s not got utilitarian metal panels either. It flies through space, being all bright and shiny, just like the optimism Star Trek had for humanity – it was and is a beacon of hope. And maybe you think that it was designed this way so it would stand out against the black of space, that it was a crude and practical decision. Well… maybe that’s true. But I think the point stands. It was a bright spot in the dark night.

The movie version of the Enterprise, designed for Star Trek: The Motion Picture, perhaps perfected the design. It was certainly more detailed and featured a number of modifications to the shape. It was designed by a committee with talented artist Andrew Probert refining Jeffries’ ideas alongside the film’s art director Richard Taylor. The model, which cost $150,000 was stunning and it got plenty of screen time in its first outing. It’s just so beautiful, perhaps the perfect rendering. And while it had more detail, it continued to shine with visual effects supervisor Doug Trumbull giving the ship an elaborate lighting system. Through these changes, it remained the Enterprise, bright and white, shining in the night.

It remained iconic throughout the movies. Think of the battle with the Reliant in Star Trek II, it’s brilliant theft and stunning explosion in Star Trek III, and then in Star Trek IV as the crew’s shuttle flies through spacedock, the Enterprise-A (the same model but with an A on it) appears and it’s like a vision of an angel.

But times move on, and as we moved to the 24th century, things got a bit darker. The new Enterprise was undoubtedly grey. Was it better? No. But visually, it was distinct. What are we watching? Oh, it’s new Star Trek because the ship is grey, everything is more sensible and they’ve thought through the practicalities. Well done everyone.

And the darkness continued. Deep Space Nine was a darker shade of grey, no doubt built from some actual practical building material, but that’s fine because it was alien. And when they went back in time and encountered the Enterprise and one of the old-style deep space stations – K7, they were both a shining and radiant pearl so we knew that’s how things used to be.

The Enterprise-E, created for Star Trek: First Contact, well it looked really metallic but at least it was well-lit when it was a model in First Contact. It’s subsequent CG appearances made it murkier and murkier.

And on TV, things were going in that direction as well. Enterprise debuted in 2005 as a prequel to Star Trek set roughly a century before Kirk’s five year mission. The ship was undoubtedly made of metal panels. And that makes sense. It should be more crude than Kirk’s ship. It should be a little rough around the edges, you should be able to see where the joins are and how it’s been made. It’s a great design and makes absolute sense.

Then we get to the reboot movies set in an alternate timeline. This trailer set it up. Look, there’s just too much welding going on. I know it’s got the same general colour scheme, but it looks fairly dark.

I understand space is dark too and you’re probably going for realism, but this isn’t real. The brightness is a visual metaphor. The lens flares aren’t real on the bridge so why should anyone worry about light sources in space.

Anyway, let’s get to the point and my real problem. It all comes back to Star Trek: Discovery. Have you seen that ship? It’s pretty cool. It looks like some of Ralph McQuarrie’s concept art come to life. But it’s got a really dark and metallic hull. I guess it’s bronze. It’s hard to read the writing. Now that’s all good, I’m all for infinite diversity in infinite combinations. But it is set at the same time that the USS Enterprise was in service. Maybe it’s a freak design, the Crossfield Class was experimental after all. But no, the USS Shenzhou from Discovery’s pilot was also dark and metallic, like one step up from the Enterprise of the franchise’s other prequel show.

And it was inevitable that the Enterprise would show up at some point. Would it look like it always had? Well… yes but also, no.

Discovery is a visual reboot of Star Trek. They aren’t going to wear 60s uniforms or use the design aesthetic of the time although the incredible production designers have gone out of their way to make newer and cooler versions of what came before. I understand that. It’s not really a smart move to be too slavish to the past; a show looking that way would alienate casual viewers and wouldn’t really look futuristic. And yet, I see The Madalorian and how the models and the panels and screens look exactly like a design from 1977 and I get sad. Why bother setting Discovery in that time if you can’t make a show with that look?

So now we come to Strange New Worlds, a direct prequel to Star Trek: The Original Series, set around five years before Kirk takes command, which will inevitably see that iconic crew coming together. The show is a spin-off from Discovery, where the designs for the interior, uniforms and the ship were first seen. Obviously, everyone involved has worked really hard to capture the spirit of Star Trek’s original series while also making it feel fresh. The Enterprise, designed by John Eaves, looks stunning. It is a great design, taking the best of the original design combined with the movie and something new. But it is different. And it doesn’t have that bright shining hull that is seared into my brain. It doesn’t light up the room, the darkness of space dulls it instead.  Since the late 90s, rather than space being black with twinkly bits, it’s been all clouds, planets and nebulas and looking at it is like viewing ships through soup. I miss the dark emptiness of space, with the shiny Enterprise, the one bright spot. But this is the aesthetic. It has detail for UHD, it has dark shadows because there’s no light source. Well, screw that.

The latest trailers have shown us the Enterprise and even a space station, clearly inspired by K7. But it’s all dark metal. And it’s fine, even beautiful, but I’d just really like it to feel like Star Trek.

These are the same. pic.twitter.com/GRykIwmkwN

It’s a choice. It’s always a choice, and I think the best space visual effects on TV today are not on Star Trek, but on Seth MacFarlane’s clearly-inspired-by-Star Trek show The Orville. The ship is sleek and bright and who knows what’s lighting it up?

And I don’t care because I can always see what’s happening. It looks iconic and the effects have the pace of the 90s but the beauty and rendering power of today. It’s the perfect balance. I have no idea when it’s a model and when it’s CG. It always looks like CG on Discovery. Maybe it’s the way the camera moves, maybe it’s the over-designed space. But I like the simplicity. I like models.

It's a dangerous job, so try to have some fun. Captain Pike's orders. #StarTrek: #StrangeNewWorlds premieres May 5 💫https://t.co/ypHgRphrr9 pic.twitter.com/nHRCoZtOtc

I wish Star Trek wasn’t afraid of what it was. It had a look. And it looked good. The Motion Picture and The Wrath of Khan still look good. So make the choice. Just be Star Trek – choose to look bright. Choose not to care that some people won’t like it, because if you commit and don’t try to be what you think everyone else thinks you should be, you’ll just be magnificent.

Star Trek: Strange New Worlds debuts on Paramount+ on 5th May 2022 in the US, Australia, Latin America and the Nordics.

Star Trek: Strange New Worlds takes the science fiction franchise back to episodic storytelling but is it a success?

Can you ever really go back? No, seems to be the answer according to Star Trek: Strange New Worlds, but is that a bad thing?