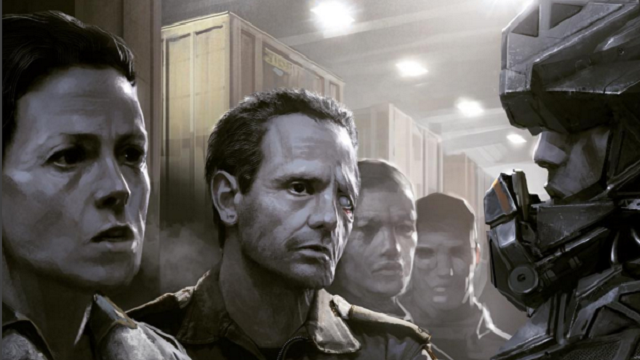 When it comes to modern cinema, there’s one moment more than most that represents a franchise alienating its core base (see what I did there? ALIENate? Get it?).

It’s not Mission: Impossible turning the TV show’s lead hero into a bad guy; it’s not Police Academy losing Steve Guttenberg (although that one’s pretty monumental)… It’s the decision to kill off Hicks and Newt at the start of Alien 3.

Unsurprisingly, James Cameron – the man who gave us the incredibly satisfying ‘Can we dream’ ending to Aliens – had derided it (a statement that carried far more weight in a time when he hadn’t given his endorsement to Terminator Genisys).

Lance Henriksen also wasn’t a fan, as is clear from his contribution to the Alien 3 commentary where – for the most part – he adheres to the ‘if you can’t say something nice…’ principle of DVD commentary.

For many, it’s a case study in what not to do when taking on the reins of a major franchise (Chris McQuarrie cited it when explaining why he wanted the end of Mission Impossible: Ghost Protocol to reveal Michelle Monaghan had not been killed off).

Newt’s death has become shorthand for betraying an audience and undercutting everything that has come before it.
When Alien 3 came out in cinemas, I was devastated. Not only because Hicks and Newt were killed, but because those deaths carried no weight. Their deaths seemingly had no impact on Ripley whatsoever, which, in my mind, was utterly unforgivable (it’s worth noting the Assembly Cut doesn’t suffer from the same problem – one of many improvements over the theatrical cut). I was pissed off. So much so, it took over 20 years (and a vastly superior rough cut) to convince me otherwise.

Still, to me, there are only two real Sigourney Weaver Alien films – Alien and Aliens. While I dig the other two, I don’t view them as *shudder* canon (I can’t stand that word). To me, they’re stories akin to Marvel’s ‘What If?’ – tales from another universe… a different universe to the one that’s real…the universe where Ripley, Newt and Hicks are all still alive.

Flash forward some 24 years and the reaction to ignoring the events of Alien 3 and Alien: Resurrection for a Neill Blomkamp-led sequel is proving surprisingly divisive.

In fact, one of the first responses I saw to the Blomkamp post asked “how do we stop him?”.

Even people who hated the decision to kill of Newt & Hicks seemed to hate the idea of ignoring the two oft-maligned sequels.

At first, this attitude surprised me. And not just because a thirty-plus years on sequel ignoring parts 3 and 4 fit with the continuity I’d built I my head… but also because – to me – who wouldn’t want to see that? A sequel that lived up to the groundwork laid by James Cameron in Aliens, that built on these fantastic characters rather than killing em off as the 20th Century Fox fanfare had just started to run.

To me, it seemed like an idea worth banking on… so why wouldn’t fans get behind it?

Then it hit me. From their perspective, it’s better to not return to that well than go back, only to see it screwed up a second time over. (Or if they’re Alien 3 fans… Fuck Blomkamp for messing with the continuity).

We’re talking about film fans who’ve been letdown by bullshit promises before. People who, if they’re anything like me, had swallowed the line of bullshit that Robert Englund spouted with every new Nightmare on Elm St movie… namely that this would be the film where Freddy was scarier and spouted less dumb one-liners… only to be disappointed almost each and every time (no offence to Englund… he said what he was told to. I’m just glad Craven had an idea to right the ship and make good on that promise).

They’re people who lived through an era where promises were repeatedly made and broken by filmmakers who were little more than hired hands on shitty sequels. They’re people who’ve experienced it before and don’t want it to happen again, especially to a series as beloved as Alien.

And while I understand the sentiment, I think it’s fundamentally misguided. Sure, a course-correction/conscious shift to ignore that much story is unprecedented.

But at the end of the day, what’s the worst that could happen?

As far as I can tell, the worst that could happen is that he’ll produce a movie worse than Chappie that would be momentarily derided before sinking into obscurity, alongside the two Alien vs Predator movies.

At best, we could get a great piece of sci-fi horror action that holds is own against two undisputed genre classics.
Either way, the end product won’t erase the existence of earlier entries and it won’t diminish their quality.

Let Blomkamp make his damned movie. Or at least try to get it made… as far as I can tell, there’s no guarantee the sucker’ll make it yet.

Hope for the best, expect the worst… and in the meantime just be grateful you’ve got a movie of such enduring quality that some three to four decades later its still seen as a benchmark for quality in the genre. You’ve got nothing to lose, and plenty to gain.