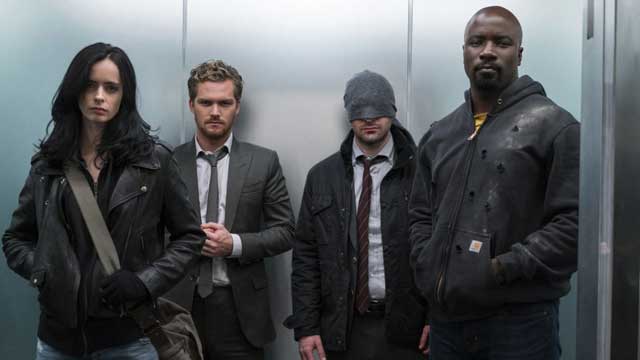 After setting up bingeable streaming versions of Daredevil, Alias, Power Man and Iron Fist comics, and dragging in some unlikely side characters along the way, the four stars align for a small screen equivalent of The Avengers or an Arrowverse Crossover Event.

The Netflix shows have struggled with some less than stellar reviews as they’ve gone along, however, despite a largely warm reception for the first Daredevil series, Jessica Jones and Luke Cage.  Daredevil’s second outing wasn’t quite as big a hit while Iron Fist proved hugely divisive, even if we still quite liked it.

One of the biggest criticism aimed at the shows was the extended length, with 13 episodes proving just too long for many to sustain the plots adequately, leading to sidetracks, diversions and dragging out of storylines to an unnecessary level.

This time out, however, we’ve got just eight episodes as Matt, Jessica, Luke and Danny – along with some familiar faces — come together to save New York.  Although anyone expecting a big explosive start might be slightly disappointed.

Indeed, we’re a quarter of the way in before the gang starts to come together, with the first two episodes largely devoted to setting up not just the threat the dysfunctional quartet face, but also how they come together.

After all, while both Daredevil and Iron Fist have long-standing issues with The Hand from their own respective shows, the mystical ninjas have yet to trouble the world’s of Jessica Jones or Luke Cage.

We join the story where Iron Fist largely left off, with Danny and Colleen chasing down leads on the Hand and what happened to K’un-Lun, with Rand plagued by visions of dead monks he feels responsible for.  Following a lead to Cambodia, they’re attacked by a mysterious figure who turns out to be a Hand-resurrected Elektra.

Matt Murdoch, meanwhile, has given up being the devil of Hell’s Kitchen, but remains largely estranged from Foggy and Karen, the latter of whom has apparently now become one of New York’s top investigative journalists for reasons passing all human understanding.Focusing on pro-bono work, he’s still tempted by donning the red suit, until Foggy passes him on extra cases to keep him busy and his mind off superheroing.

Jessica’s still hiding out from the world after dealing with Kilgrave, refusing to take on new cases until a tearful woman turns up at her door trying to track down her husband — who’s gone missing.  After a threatening phone call telling her not to take the case sparks her interest, she finds the husband has stashed a tonne of explosives in Hell’s Kitchen – and is being pursued by a mysterious assassin.

And Luke is out of prison at last, thanks to the evidence found in the barber’s shop, and by Foggy Nelson’s legal wrangling.  Picking up his relationship in Harlem with Claire Temple, he’s asked by Misty Knight to look out for a young man who’s siblings have died — and who appears to be in deep trouble himself.

The four disparate storylines begin to crossover after New York is hit by a surprise earthquake, leading all four to a new skyscraper — designed by Jessica’s missing man — on the site of the giant hole Matt discovered in Daredevil series 2.  It’s a site that’s central to the plans of the Hand’s leadership — with Danny Rand is key to their scheme. And from thereon in, we’ve got ourselves a team.

The opening episodes leave audiences with a lot to unpick, especially with Matt and Jessica, for whom it’s been more than a year since we last encountered them.  So helpfully, the various scenes involving their storylines are light and shot through appropriate filters — predominantly red for Matt, purple for Jessica, yellow for Luke and a dull murky green for Danny.

This reaches its peak as the gang hole up in a convenient Chinese restaurant, the lighting scheme of which just happens to match the red-purple-yellow-green motifs of our heroes.  It’s so blatant as to be almost offensive, like the producers are so worried viewers can’t keep track they’ve colour-coded the drama even more than is usual.

Thankfully things settle down one we get our first major scrap of the series, which takes the traditional Netflix MCU corridor brawl and doubles down on it in spectacular fashion, although before then we’ve had the Defenders’ equivalent of the Iron Man v Thor dust-up in the forest as Danny and Luke exchange lovetaps in a car park.

Indeed, Rand and Cage are paired off more often than not, largely because of the Claire connection and trading on the long standing Heroes for Hire relationship from the comics.  But we do also, thankfully, get glimpses of the Jessica and Luke relationship from her titular series which gave it so much spark, along with the intriguing pairing of Murdoch and Jones – perhaps the two most dysfunctional investigators to pound Hell’s Kitchen’s pavements.

Most of the interaction though, is as a unit — and a blunt force one at that  The producers have tried to compensate for the fact that the four are pretty overmatched against the average opponent by going for numbers, with three key fights where the Defenders (never actually referred to such by name) face 30 or 40 Hand members at a time.  As such the fights, while retaining the impact of the previous episodes, are a bit more flashy and less hard-hitting.

The cast pretty much all pick up from where they left off, with uniformly excellent turns from Ritter, Coulter and Cox.  Finn Jones’ Danny Rand remains jawclenchingly earnest, but we do get a glimpse of a more light-hearted performance from him which would be a welcome basis for Iron Fist series 2.

Because this effectively serves as a direct sequel to Iron Fist, Jessica Henwick and Rosario Dawson get the most to do from the guest cast, with Deborah Ann Woll and Rachael Taylor’s turns little more than extended cameos. Indeed, for much of the back half of the season most of the supporting cast are locked away in a police station for spit and cough appearances.

Sigourney Weaver’s performance, meanwhile, could be charitably described as measured, drawing something from a role that’s largely written through with cliche that only really fizzles in a couple of scenes.  It’s ironic, given the TV shows had largely avoided all the problems with weak villains that have plagued the cinema MCU instalments, that the one with the biggest name actor is the one to succumb to it.

But perhaps that’s in keeping with the show.  This isn’t the big, glowing portal in the sky heroics of The Avengers – quite the opposite, in fact, with much of the climax taking place several hundred feet underground.  Even with an earthquake and a building exploding, the ending feels remarkably low key and muted.  No big parties and celebrations in Stark Tower here, just a quiet round of shots in a bar.

Creatively at least this feels like a full stop to the Hand storyline that has run through much of the Netflix shows for the last two years, although there’s enough dangling threads — and that final scene — that a rematch may yet be on the cards, to the joy of presumably nobody.  But it does also expose the problem the Netflix shows have had, in the same vein as Agents of SHIELD – in playing in the same universe as the films but not being allowed to use the same toys.

Given The Defenders moves away from the street level vigilantism of the previous five series to put the whole of New York at risk, it’s impossible to not ask where Stark or the Avengers or especially the wee lad with the spider suit have gone.  The strict demarcation between the franchises has made that impossible on a practical level, but given all New York’s been through in the MCU, it does feel like there’s an elephant in the room that now needs addressed

What can’t be faulted though is the production itself.  Colour schemes aside — and The Defenders isn’t the first show to be quite so blunt with its character lighting, let’s be fair — it’s a visually impressive feast, with only one slightly ropey special effect betraying the TV budget, balanced out by solid — if occasionally unspectacular — direction and the typically impressive fight choreography.

It’s also balanced by a menacingly orchestral score by John Paesano which leans on many of the motifs from his work on Daredevil.

So what next?  We know Daredevil 3, Jessica Jones 2, Luke Cage 2 and Iron Fist 2, along with a new Punisher series, are on their way over the next couple of years.  But it’ll be interesting to see where they go from here.

Will, as the final moments suggest, mean we see Luke pop up in Jessica Jones series 2, or Danny Rand and Luke Cage joining forces as Netflix’ Heroes for Hire?  The sky might not be the limit, but, as Alexandra says, New York’s so densely packed it’s hard to imagine the Defenders won’t bump into each other again.

New still from Marvel’s Guardians of the Galaxy

This is the team that isn’t the Avengers