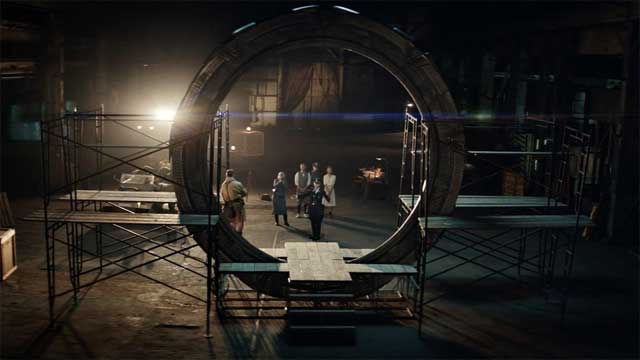 The first three instalments of Stargate Origins dropped on Friday 15th of February. You can read our spoiler-filled thoughts below. First, it might be useful to see where the Stargate franchise stands.

Previously on the Stargate franchise…

It’s been a rocky road for the Stargate franchise since it’s headline show Stargate SG-1 was cancelled back in 2007. Of course, it all started with the theatrical film in 1994 starring Kurt Russell and James Spader. Seeing the potential to run it as a TV show, writers Brad Wright and Jonathan Glassner independently pitched MGM to make a TV show. SG-1, starring Richard Dean Anderson, launched in 1997 would become the dominant form of Stargate running for 10 seasons.

At the franchise’s peak, there were two shows on the air concurrently in the form of just different enough spin-off Stargate: Atlantis and it was expected that SG-1 would live on in the form of TV movies. Two were produced right after their TV run but at the time, the bottom fell out of the DVD market meaning no more were produced. When Atlantis was cancelled in 2009, Stargate Universe (also known as SGU) was somewhat insensitively launched as its immediate replacement. SGU broke the mould of the gate shows, being more adult, more morally ambiguous, highly serialised and absolutely gorgeous to look at. Essentially it was to Stargate what Discovery is to Star Trek. Although it became a great show in its second season, it took too long to find its feet and was unceremoniously cancelled after two seasons. By 2011, the franchise under the guidance of Brad Wright was essentially over, and MGM’s precarious financial situation didn’t really make it look like it would crawl back from TV oblivion.

In the years since, the original film’s creators Dean Devlin and Roland Emmerich wanted to bring the show back to the big screen with a soft reboot trilogy, ignoring the events of the TV shows. They even signed a deal with MGM, but the failure of their other sci-fi resurrection Independence Day: Resurgence appeared to put paid to that.

Where are we now?

Last summer at San Diego Comic Con it was announced that the Stargate franchise would be back, not in the form of a film or even a TV show, but as a web series titled Stargate Origins. It would be hosted on Stargate Command, a new subscription website/app which would act as a portal to all Stargate content, with 17 seasons of shows, the three movies as well as new behind the scenes and interview content. The new show was the jewel in the crown of the platform and would feature 10 episodes, each lasting approximately 10 minutes. That would essentially amount to a new TV movie. The new series would be set within continuity, written by Mark Ilvedson and Justin Michael Terry, with Mercedes Bryce Morgan directing.

So what’s it all about?

If you recall, the original Stargate movie opens in Giza, Egypt in 1929 with Professor Paul Langford discovering the Stargate, along with his young daughter Catherine. The film then jumps forward to the 1990s with an elderly Catherine asking Daniel Jackson to help her trying to open the gate. This show goes back to the start of the story with Catherine and her father still working in Egypt, trying to unlock the secrets of the gate, with no idea what it does and no one funding their work. When Nazis show up with some ancient scrolls relating to the gate, it seems they have found the key to the purpose of the Stargate.

Okay, so get to your review already

The new show feels like it perfectly embodies the tone of the golden age of the show. It’s good natured and adventurous.  That spirit is encapsulated in the lead performance of Ellie Gall as Catherine, whose charisma really carries the show. For a lead character, you couldn’t hope for much more. Her sidekicks on the adventure, her boyfriend Captain James Beal (Philip Alexander) and his friend Wasif (Shvan Aladdin) are decent comedy relief. Connor Trinneer is a fine performer but here as Paul Langford he’s lumbered with a pretty implausible hair colouring as well as some poorly crafted dialogue, especially in the opening instalment which attempts to set up his relationship with his daughter.

When the Nazis turn up, it’s fair to say that they’re written fairly broadly  with Aylam Orian’s Dr. Wilhelm Brücke literally playing to camera as his scientific discovery’s are recorded for posterity on an old (and incredibly small) film camera. There’s also a comedy Nazi who likes dressing in women’s underwear…for some reason.

Telling a Stargate story in 1939 is a fun idea. It means you can do a plausible Indiana Jones rip off with occultist Nazis and high adventure.In terms of continuity, some might think it’s breaking canon. But really, the whole thing seems insignificant enough to ignore right now. And it’s an unexplored time period and it’s not like there’s a queue of new Stargate projects. The problem is, they don’t have the budget to have any fun with the concept. The show opens with footage of the original film, which mixes very well and opens up the scale of the production but that’s as good as it ever looks. Most of the early episodes are confined to a warehouse and even in sections which are set outside of the warehouse, it feels a whole lot like they were filmed in that warehouse.

The story itself is perhaps a little bit rushed. Given how much time in the film was dedicated to opening the Stargate, it feels mighty convenient that a Nazi turns up and can do it within minutes, but then again, it wouldn’t really be Stargate without people walking through a whirly event horizon.

In terms of production design, the costumes and props look authentically period. The Stargate itself looks absolutely stunning. Presumably there was still a prop in storage, or they spent the entire budget on this one item. The DHD (dial home device) looked a little bit off in colour but that could be the lighting. It’s a nice way to tie the show into the TV continuity though.

However, the visual effects are creaky to say the least. Through years of the show, we’ve learned what a Stargate event horizon should look like. While the kawoosh is pretty good, the entrance to the gate just looks wrong. Actually, not just wrong; it’s a bad effect. You can probably find better efforts on YouTube. It’s sad that the budget was so low that they couldn’t recreate something that was done effectively on a TV budget 20 years ago. And the production was apparently so poor, they go out of their way to avoid actually putting it on screen with many side-on shots of people walking into the gate.

When we reach the alien world and meet the Goa’uld, their powers are demonstrated through some very cheap looking sparkles. It seems, they couldn’t even spring to the classic effect of their eyes lighting up. The alien world set also looks weak and with a bright lighting scheme not really helping. There was a reason the temple on Abydos was so dark in the pilot episode for SG-1. Still, it’s early days.

In terms of the execution, it’s certainly more entertaining when there’s on screen action rather than attempting any of the character stuff, especially between Catherine and her father with their mild antagonism never ringing true. The direction is solid but with so many mid-shots, it feels like it may have been constrained by the available time. There are some corny moments with the Stargate being jumpstarted by a car, which apparently provides more power than the mains but Stargate has often been corny in the past. The transitions at the end of the episodes are literally a spin of the camera, which just looks incredibly lame.

It is what it is, which is a cheaply made series designed to gauge interest in the future of the franchise to see how many are willing to subscribe to an app. It feels like the kind of thing that would have been a decade ago when brands thought they had to supplement their TV with online content. There’s more than a whiff of a fan film about it. They don’t have enough money to make a real credits sequence and the music sounds a little bit synthesised.

And that’s fine, but when you look at the legacy of well-made shows and gorgeous TV movies and see the kind of budget the new Star Trek has, it just feels a little sad. With the short run time of episodes, you’d hope they’d be able to spread the budget so it at least looked as good as the old days but it’s demonstrably not. It’s nice to think this would lead to something bigger and better, but based on these first instalments, it feels like a halfhearted attempt to keep interest in the franchise alive. They were talking about a movie trilogy not so long ago so why is this so cheap? As fans, we at least deserve a product that has the budget of a TV movie; otherwise, it might be best to leave the Stargate buried.

A new trailer and details have been released at San Diego Comic Con for Stargate: Origins, a prequel web series set in the Stargate universe.

Catherine, James and Wasif arrive on an alien world and fight off a scantily-clad yet powerful alien with unconvincing yellow eyes.