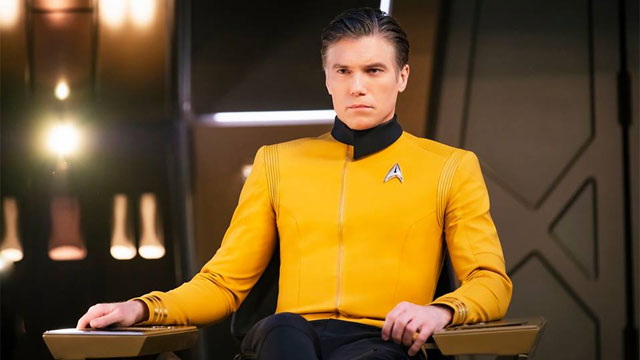 You bang on about Star Trek all the time Mr Spoilist, why have you been ignoring Discovery?

Ignoring seems harsh. Look, we reviewed the first two episodes of the first season. However, in its first season, the show went in a direction which became…not very interesting. Attempts to be dark and ‘adult’ clouded any sense that anyone involved actually understood what Star Trek is. Someone died horribly every episode but without any weight. The idea of a season of war isn’t a bad one, but you got the sense that the writers weren’t really interested with a side-quest to a parallel universe along with silly and unearned twists every episode. And the promise that they’d show both sides with the Klingons given equal screen time was quickly forgotten about and all they supposedly great warriors did was stand in a room making declarations and no real bad guy managed to stand out from the crowd. Plus a Manchurian Candidate plot that made no sense. Then the whole arc was wrapped up right at the end of the season with another giant twist,  and a big speech about what it means to be in Starfleet. Then when the Enterprise appeared at the end, there were not enough Picard facepalm GIFs to convey how stupid everything seemed. Basically, I didn’t have anything nice to say so I didn’t say anything.

Oh, but you have nice things to say now, do you, you fair-weather fan?

Yes. This premiere is a nice reset. While the appearance of the Enterprise could have been a horrible moment of fan-wankery, they don’t really dwell on it. Or they dwell on it just the right amount. The tone of all Star Trek shows has been set by the captain and despite Discovery taking a different approach to it’s lead character, it remains true. Jason Isaac’s Lorca was dark, ambiguous, tortured and underwritten. He was interesting until you found out he was from an evil universe, at which point, he became a cartoon. In contrast, the Enterprise brings aboard a new captain in the shape of Christopher Pike. What a guy!

Have a crush do we?

Anson Mount looks like an old-fashioned matinee idol. His version of Pike is a square-jawed hero with a quiet calm. He is a good guy. There is no doubt he intends to do the right thing. That is what Gene Roddenberry’s Starfleet captains looked like (admirals were mostly evil, obviously). But he feels like a Star Trek character – someone who the audience can believe in and trust. We don’t need to doubt our heroes or look for the next twist. We want to see smart people in tricky situations, testing their values and considering the morality.

Back up a second. What do you mean his version of Pike?

Captain Christopher Pike was the first ever TV Star Trek Captain as played by Jeffrey Hunter in rejected pilot episode ‘The Cage’. He was a quieter, more thoughtful and more serious character than Kirk. That episode was later repurposed in first season one two-parter, ‘The Menagerie’ showing Pike’s almost tragic end. There are allusions to ‘The Cage’ in the fortune cookie message Pike picks up in Discovery’s ready room. There’s also a version of Pike as played by Bruce Greenwood in the JJ Abrams films Star Trek and Star Trek Into Darkness who acts as a mentor to the young Kirk.

He looks pretty like Hunter and has the same quiet calm. There’s a bit more of a sense of fun and the odd smile but the character definitely seems recognisable. There’s more to him than just being a generic hero even if he has all those traits. Perhaps he has trouble trusting. And he definitely isn’t Kirk.

Enough of the Pike chat, what’s this episode all about?

Well, it’s about Discovery being commandeered and given new orders by Captain Pike as his primary command the Enterprise has been disabled by this weird phenomenon. Seven mysterious signals have appeared across the galaxy and the Discovery is going to spend the season chasing each one to try and work out what’s happening. This week’s red signal leads them to a Starfleet ship that’s been stranded on a asteroid for 10 months.

Sounds like the show has a new purpose then.

That’s right my fictional interrogator friend. It is all new. This is never emphasised more than the moment when Pike gets the bridge crew to introduce themselves. This is surely for the audience’s benefit as much as anything because seriously, who are all these guys? The show has taken elements from the more episodic Star Trek of old, combining it with the action of the recent Bad Robot films and adding Discovery’s own thing.

What is Discovery’s own thing?

Melodrama and a sense of self-importance. Discovery liked being a twisty soap opera in season one and the flashback scenes featuring a young Michael and Spock are certainly in the mould. That’s not to say that they’re bad. Being a post-Abrams series, the relationship between Michael and her foster brother is a mystery box waiting to be explored.

With Michael’s vision of the red angel, it’s clear the series is setting up a debate about science and faith, with the writers claiming it’s the first time this has ever been done in the franchise. It isn’t but that doesn’t mean it isn’t worth revisiting.

Also, the episode features a brutal death, which is very Discovery.

Yes. Look, the mystery thing I can take or leave. It feels a bit Marvel. We don’t need the universe in peril. No one ever cared when Earth was in danger in Star Trek – that’s not your point of investment. What is good is seeing smart, capable people doing something good. In this case it’s a rescue and the rescued being super smart with survival skills. That’s very Star Trek.

Anything else worth mentioning?

The show has lightened up with the sets looking far brighter. Also, they’re trying to be funny. It gives the bridge crew some nice moments to act more human. And Tig Notaro’s quirky rescued engineer is an absolute joy However, an awkward lift scene with a sneezing Saurian feels like it’s from another show. That show is The Orville.

Will you keep watching?

Yes. I like this version of the show much better. The big arc is interesting enough and if it leads to a new episodic story each week, that’s a good way of simplifying the show. But maybe you don’t really need a big justification for doing things each week. Aren’t they supposed to be explorers? But anyway, I liked it and Pike is really great. Have I mentioned that?

Yes. Now give us some Star Trek trivia you massive nerd.

This episode is called ‘Brother’ which should not be confused with Star Trek: The Next Generation season 4 episode ‘Brothers’. Similar episode titles are fairly common. The Next Generation has an episode in season 2 called ‘The Emissary’ while Deep Space Nine’s pilot is called ‘Emissary’. Discovery’s season 1 episode ‘What’s Past is Prologue’ is very different from Deep Space Nine’s early season 1 outing ‘Past Prologue’. Of course Voyager’s season 6 episode ‘Blink of an Eye’ deliberately references Star Trek’s season 3 episode ‘Wink of an Eye’.

Until next time my friend.

The Enterprise is diverted on a secret mission to pick up a special Emissary, K’Ehleyr, a half Klingon who has a history with Worf.

How stupid is Riker? Find out in this week’s exciting instalment of First Contact