TV REVIEW: STAR TREK: DISCOVERY EPISODES 1 AND 2 ‘THE VULCAN HELLO’ AND ‘BATTLE AT THE BINARY STARS’ 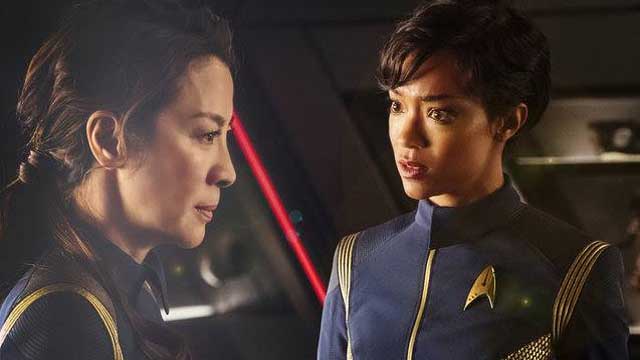 SYNOPSIS: The USS Shenzhou is on a routine mission when it encounters an ancient Klingon vessel which takes the whole Federation to the brink of war.

REVIEW: After an eternity of scrutinised yet but mostly secretive pre-production, Star Trek: Discovery has arrived. Well, it’s sort of arrived. These opening episodes don’t actually feature the USS Discovery or its captain as played by Jason Isaacs but instead this two-parter is essentially a prologue featuring series lead Lieutenant Commander Michael Burnham and setting up the events that will inform the rest of the run.

It’s hard to deny that this show looks gorgeous. The effects are pretty stunning from the outset and the set is nicely utilitarian with proper buttons and everything. If you want to try and make some kind of sense of it in continuity then it all looks like a nice bridge (ha!) between Enterprise and the original movie ships. You could even say the same about the uniforms with the blue carrying on from Enterprise and the single colour matching the deep red from Star Trek II onwards. The Doctor’s uniform even looks suspiciously like something from The Motion Picture. However, once again that means the Star Trek is the aberration. The show that birthed it all remains this weird outlier among the entire franchise.

Clearly, much of the visual inspiration has been taken from the rebooted Star Trek movies, with the warp effect looking fairly similar to that in Star Trek Beyond and the phaser pulses just like those from Star Trek (2009). A sequence on the Klingon ship also has clear allusions to the Romulan vessel from the first reboot film.  The lighting is fairly reminiscent of those films with lens flares aplenty, particularly in the first episode. There are also so may dutch angles that you expect to see a stoned cyclist with a bunch of tulips whizz past. Did you know that an off-kilter angle can signify that something isn’t quite right? Bored now.

These episodes feature some clunky dialogue. While the relationship between Burnham and Captain Georgiou was interesting, some of the exchanges were somewhat on the nose. That felt authentically like Star Trek anyway.

The Federation smugness all present and correct. This is something explored quite well in Deep Space 9. Ben Sisko once said ‘It’s easy to be a saint in paradise’ in relation to how mankind could be pure on Earth but it’s a tough universe out there. This pilot tugs at those threads, exploring what it means when Starfleet stop being explorers and are forced to be soldiers. The admiral perfectly embodies humanity’s complacency assuming other species share the same values and it’s all just a matter of having a nice chat. Frankly, it was was a relief when his ship got destroyed.

Look everyone it’s Sarek, you know Spock’s dad? He raised Burnham after her parents were killed by the Klingons. Literally nothing is gained by this being Sarek. He doesn’t look like Sarek, sound like Sarek or act like Sarek. It’s just indulgent. Will this come up again? Probably and maybe it’ll have some kind of resonance but here, not so much.

The sounds are all echoes of the past (and future), mixing in the familiar noises from The Original Series – the radar whistle, red alert, and The Next Generation – error message, hailing frequencies open. The screen displays look pretty similar in font the the original movies and the phasers and communicators are close enough to the original series to be a nice touch. They also called the weapons phase cannons which fits with Enterprise.

There are Starfleet deltas everywhere. This was something that was unique to each ship back in this era but was retconned into being the Starfleet emblem after Kirk’s five year mission was such a hit or something. Enterprise respected this, so it might have been nice to acknowledge it here, but it’s a fannish detail and it doesn’t matter (it does matter. I’m seething underneath it all).

This is a show trying to be modern. It does the flashback thing that every show has thought necessary since Lost, which works in parts here but feels tacked on in other places. Call me old fashioned, but I like character reveals to be less explicit and their actions in the present to explain their past. It also feels very much how JJ Abrams handled his introduction of Kirk and Spock. What’s old becomes new becomes old and then becomes new again.

So we get to see a proper space battle for once. There’s no ‘only ship in the sector’ in this show. Sure, all the ships are saucers and nacelles, but given this is just before The Original Series era, would it have hurt them to throw in a Constitution Class vessel? So maybe it wouldn’t match all the ships they have on display but maybe you should ask why bother setting it in this era if you’re not going to honour it?

Obviously, this show is trying to distinguish itself from Star Trek’s past TV adventures in some ways. Up to now every Star Trek opening title sequence has featured some lovely shots of space with the vessel or space station flying by, only in one shot to be fair. This time it’s lots of fancy production design art motion graphics. It’s fine and many people will love but that along with the somewhat subdued music makes it all feel a little bit not like Star Trek. The end credits also forego the animated starscape of the TNG onward era for plain black. Different is good. Things were a little bit too formulaic in those shows and it can be unhelpful to get too attached to the past, but I am so you should all hear about it.

Let’s talk Klingons. They look different. They’ve looked different before of course. In the original series they were tanned men with beards. Then in The Motion Picture they got ridges and that look very much continued into TNG, DS9 and Enterprise. Here, they have more pronounced ridges and are all bald. We were told that it’s because all these Klingons are of a different house from those we’ve seen before but it then we saw more and none looked that familiar although all were different. Plenty of time for the old when we get the new. They have that familiar badge and say ‘honor’ a lot though so not so much has really changed. Seeing things from their point of view is interesting if a little slow at times and perhaps it’ll get more intriguing as we progress. But if it descends into Game of Thrones politics stuff, I’m out.

So what do you really think?

As a pilot, it’s terrible. Seriously. A pilot should set up the new status quo. This doesn’t do that. We haven’t even met half the main cast yet. It leaves our lead character in a terrible position for doing a terrible thing. It’s an interesting piece of drama in the Star Trek universe but it leaves many questions. But then, I’m a dinosaur. There is no status quo. All bets are off. All characters are expendable. All sets can be rebuilt. Every week can be different. So really, how can you judge? Do I want to see more? Yeah, I’ll watch all of it because I am a slave to my nostalgia and it seems interesting. But what’s it about? Underneath the surface, what greater truth is it telling? What’s it saying about the human condition? Because however silly it was, however earnest, Star Trek has always aimed to show us more about ourselves. It should be a journey of self-discovery. This just looked good.