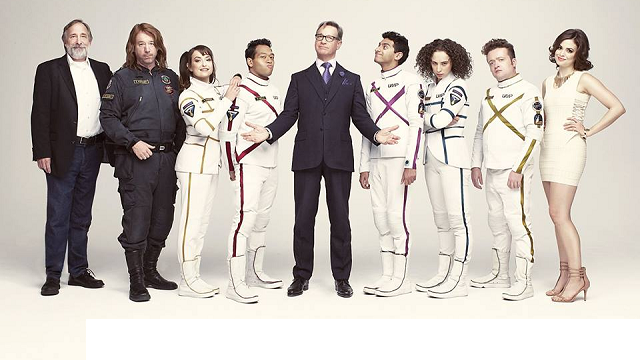 It’s no exaggeration to say good science fiction comedy is rare as hen’s teeth. And as far as movies or TV goes, it’s like finding hen’s teeth in pirahna tears (fine. You go buy a dictionary of analogies or metaphors or some such. See if I care. All I’m trying to say is that it’s damned hard to find. And when you find it, and it’s good, you should thank your lucky stars). In fact, I can count the number of great film or television science fiction comedies on one hand, while still having time to flip JJ Abrams the bird for no other reason than he was the only name I could think of as I was typing this sentence.

(For the record, the list of great sci-fi TV/movies I have is as follows: Red Dwarf, Quark, Hitchhiker’s Guide to the Galaxy – the TV series, not the movie – and Dark Star)

Now, we have the entry that acts as the most logical successor to the throne left vacant by Red Dwarf (unless the boys from the Dwarf come back… which, given their track record, isn’t out of the realms of possibility and may happen some time between now and 2050) – Other Space… a series that is worthy of the mantle of “great sci-fi comedy” (at least as far as the first two episodes go).

When it comes to fanboy geekdom, there are things that arrive loud and proud (like the Fast & Furious movies, anything with ‘Marvel’ in the production company and films directed by JJ Abrams). Then, there are shows that fly under the radar. And for a man who prides himself on some level of sci-fi geekdom, the fact that a show like Other Space seemed to fly completely under the radar terrifies me. For starters, it has two, deadset sci-fi comedy legends in it – Joel Hodgson and Trace Beaulieu, two of the founding fathers of that great geekdom institution Mystery Science Theater 3000. Then, it has the credit “Created By Paul Feig”.

That’s right, ladies and gentlemen. The man behind Freaks and Geeks and Bridesmaids (who also directed his fair share of Arrested Development and did a little-seen movie with Sandra Bullock called The Heat) is one of the driving forces behind Other Space.

And it shows. Both in the love of its sci-fi roots, and the sheer hilarity of the comedy.

The plot is simple. A ragtag crew of space explorers on their first mission is sucked through a wormhole and spat out somewhere on the other end of the universe – exploring unchartered worlds while dealing with inter-crew tensions (think Dark Star meets Voyager with a tinge of The Office). To say any more would be to ruin the fun.

What makes this worthy of the Red Dwarf pantheon is that that is has genuinely great science fiction moments. The first two episodes have moments as clever as they are funny (the villain in the second episode is such a brilliant conceit that I am still laughing even as I think about it – some two hours, and an episode of Daredevil, later).

Admittedly, I’m yet to see beyond episode two. But so far, the show nails it. It’s funny. It’s smart. And above all, it’s good science fiction. I’m sure Rob Grant, Doug Naylor and Douglas Adams would be proud.