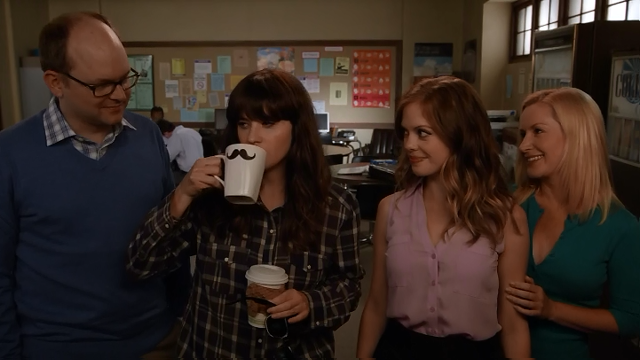 SYNOPSIS: Jess is upset that she hasn’t made any new friends at her new school so Nick offers to help her bond with the cool teachers. Schmidt has to keep his two girlfriends apart after they both turn up at his office party. Winston has to take care of Daisy’s cat but after realising she’s cheating on him, he decides he needs to get revenge.

REVIEW: After a somewhat offbeat start to the season, New Girl returns to some kind of form with this second episode. It helps to be back on familiar territory with much the action taking place in the loft, Schmidt’s office and the bar.

While familiarity is nice, some of the plot lines in this episode feel like the writer just left a course titled Sitcom 101. Schmidt appears to be successfully navigating the dangers of having two girlfriends until the office party and both of his lady loves turn up. What could possibly happen? Well actually the inevitable doesn’t happen and both buy the lies Schmidt weaves around them. It’s fun to watch him tangle himself but also to realise that he can get away with it just because both these women love him so much, although probably not for much longer.

Similarly Jess’s workplace problems are hardly an original plot and are essentially an episodic take on Mean Girls as Jess wants to be accepted by the cool clique at work. This could have been reasonably boring but the supporting cast don’t really have enough time to do anything particularly noteworthy and instead this strand actually helps build the Nick and Jess relationship far more effectively then their Mexican escapades. of last week.

Showing Nick actually acting happy and attempting to do nice things for his girlfriend is refreshing even if his decision making process hasn’t quite reached maturity yet. The pay off scene in the car park at Jess’s school after she’s abandoned her new friends is the kind of thing that helps you root for the relationship. Aside from the quirk, this show works best when it’s sincere and there’s a real believable sweetness between Nick and Jess.

Even Winston’s storyline this week has a little more emotional depth although he still seems to be appearing in a different show from the rest of the cast. Babysitting a cat (catsitting?) could have been as irritating a storyline as the puzzles but because of the context and consequences, it worked far better. That said, threatening to kill the cat wasn’t that funny or particularly in character.

Winston has been somewhat neglected being a love interest of neither of the leading ladies on the show. Did anyone even remember he was seeing Daisy before he agreed to look after her cat? Winston needs to be given something to do involving the rest of the cast and be given a love interest that gets some decent screen time. Perhaps Daisy cheating on him was a good way to clear the decks and bring in some exciting new adventures for Winston.

Overall it’s a solid step up from the premiere but there’s still definite room for improvement and a need to remove the C plots and utilise the cast as an ensemble. Coupling lead characters can lead to a shift in focus but as well as focussing on the new, it’s vital to remember what worked in the past.

WHO’S THAT GIRL? Why Jess’s colleague Molly is played by Dreama Walker. You might know her as June from Don’t Trust the Bitch in Apartment 23.

The Sheliak Corporate gets in touch with the Enterprise and they never, ever call so the crew know that something’s up. They want some humans cleared off a planet, that’s belongs to them thanks to a hundred year old treaty.

Was the real time format worth reviving?