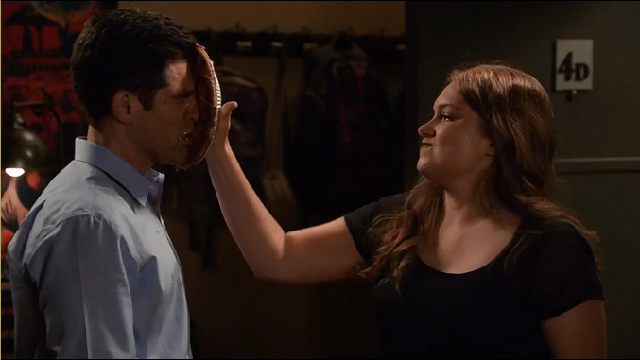 SYNOPSIS: Cece thinks Schmidt is acting strangely so asks Jess if she knows what’s wrong. Jess then gets Nick to confront him. Schmidt confesses his infidelity in confidence but Nick is unable to keep a secret from Jess. She threatens to tell Cece if he doesn’t. In the end Schmidt confesses losing Cece and Elizabeth in the process. Schmidt swears revenge, threatening to break up Nick and Jess. Oh and Winston acts weird in a restaurant.

REVIEW: Okay, we get it! You have no idea what to do with Winston. Hanging on lantern on the fact that he isn’t involved in any of the main plots really doesn’t help. Giving him another episode where he has to act like a weird crazy person is taking it too far. This week he sits in an exclusive restaurant at the community table in order to save seats for his friends on their double date. The results are hilarious. No wait, they’re irritating and unfunny. If you don’t have anything for a character to do naturally then just don’t use them. Other than that, this is actually a decent episode.

The restaurant is where the big confrontation actually happens is important  but it just seems that Winston’s part in it is taking place in a different show from this one. Tone is important and New Girl can play it sweet and heartfelt or it can play it quirky but if these are juxtaposed too closely together it’s just grating.

After three episodes it’s a relief that there won’t be any more of Schmidt’s sitcom-cliche two timing. The break up is effectively handled with Schmidt’s lame explanation of his deception heartfelt and Cece’s reaction genuinely heartbreaking. Elizabeth probably doesn’t get the screen time her departure deserves but given the time restraints, that’s understandable.

While the break ups may be sad for the characters, it’s good for the show. If you only have five regular characters and four of them are coupled up then it somewhat limits the dynamic. Nick and Jess are now the show’s central couple and while  that pairing looked like it might be irritating, here it comes across as sweet and genuine.

There is never any question that Nick is going to keep any secrets from Jess. His attempt to try and avoid her by wearing the motorcycle helmet is just the right amount of stupid but it is great to see the writers taking their relationship seriously.

The lengths Schmidt goes to in order to avoid getting caught show a desperate and not particularly likeable man, first running away from Jess and Nick and then lying to Cece to tell her that Nick is cheating on Jess. This should make him a completely irredeemable character but Max Greenfield has such charm and vulnerability that you can probably forgive most things. It might take a bit of time though before Cece is inevitably and unrealistically spends most of her time hanging out with her ex though.

The upshot of this is the new dynamic within the group with Schmidt now wanting revenge on Nick and Jess and Jess having her best friend just back to being her best friend. That might also give Winston someone else to hang out with and something worthwhile to do.

After a shaky start, this season is steadily improving and hopefully that will continue following the fallout from the events of this double date.

Some space bikers are destroying Federation outposts and Picard is fed up and tracks down their planet of origin and brings their sovereign on board to try and negotiate peace with these outcasts.