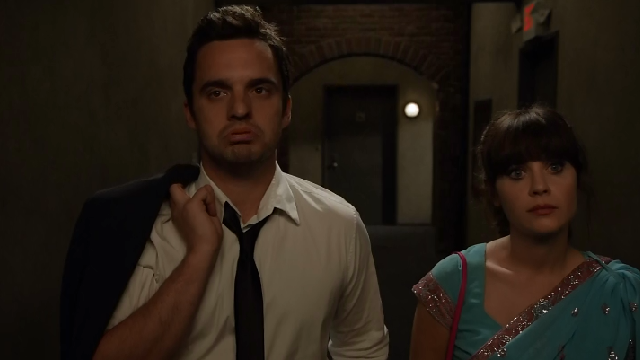 PREVIOUSLY ON NEW GIRL: After two years of flirting and unresolved sexual tension, inevitable couple Jess and Nick finally decided to make a go of it.  Cece called off her wedding and declared her love for Schmidt forcing him to choose between her and his first love Elizabeth. Winston didn’t have anything other than some stupid C plot to deal with.

AND NOW THE CONCLUSION: Unable to face their needy friends, Jess and Nick decide to drive away and spend some time on their own so they can just enjoy their new relationship and work out what it’s all about. They end up spending four days on a beach in Mexico until breaking into a hotel where Nick gets arrested and thrown in jail. Schmidt finds himself unable to function without the advice of Nick and so tells both Cece and Elizabeth that he wants to be with them. Winston, in a weird stupid C plot, can’t do a puzzle.

REVIEW: The start of a new season can be a good way to restate the intentions of a show, reintroduce the characters and remind existing viewers while they love the show in the first place. Sure, if you’re a highly rated show like New Girl then you can deal with the ongoing plot lines and resolve anything left hanging in last season’s finale. This season opener fails to do any of these and instead falls into the worst excesses of quirk.

The season 2 finale was full of life changing moments for the characters so this was never going to be a standard episode, but at the end it doesn’t really feel like anyone has moved any further forward than they were in the final moments of last season. It might have been a better decision to play out and the summer and pick up with the new paradigm in place for the new season.

Since they didn’t do that, Nick and Jess running away to Mexico is a reasonable idea but it doesn’t really have much room to explore any aspects of their characters or what their new relationship really means other than they really like each other but even having Nick admit that is a pretty bold move forward for the character.

Schmidt’s reliance on Nick to help him sort out his life and making mistakes when he isn’t around is very much in keeping with the character. His two timing of Cece and Elizabeth is clearly going to end badly but just seems like it’s creating additional obstacles to keep Cece and Schmidt apart for a prolonged period; after all no show can have two couples at the same time. While the characters actions might be in line with expectations, it seems like everyone has turned their performances up to 11, leaving it feeling more like a cartoon than anything even vaguely grounded in reality.

Winston has nothing really do in this episode and to solve this the writers have given him Joey syndrome. In the first season of Friends, Joey Tribbiani was an ordinary guy, if a little shallow and not as smart as his room matem  but in order to keep making jokes about his intelligence seasons went on, he became stupid to the point of mental illness with an inability to comprehend even the most basic things. In this episode they’ve decided to play up Winston’s weird to the the same effect.  Winston is doing a jigsaw puzzle. He gets weird when he does puzzles and gets naked but then he can’t even put two pieces together. Winston is unable to help Schmidt with his dilemma because he’s just so weird. Didn’t he give Nick some really good advice about love in the last episode? Oh well, next week he’ll probably have some other crazy plot to do.

With two leads forming a romance the format will always be shaken up but this sitcom needs to work out the new situation pretty quickly and ground itself. The overacting, improvisation and all the SHOUTING are grating and annoying. At its best New Girl is a sweet and funny show with enough emotional depth to remind you that you’re a human being capable of feelings. Like the best sitcoms, you should really want to spend time with the characters. At its worst its a loud mess shouting at you to notice how kooky it is. The show needs to rein it in a little otherwise these friends will end up being too high maintenance.

It’s the final episode of In the Flesh series one and the show goes out on a high.