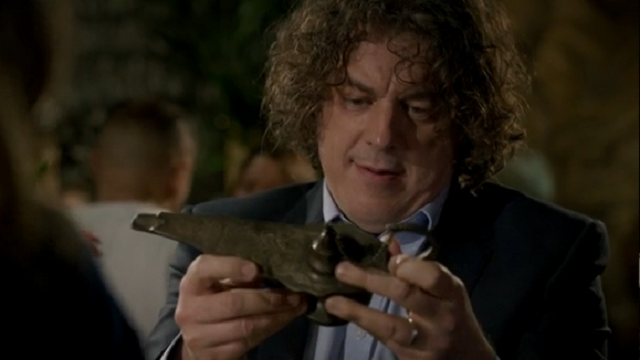 SYNOPSIS: Jonathan must solve the mystery of an expensive watch that turn’s up in his cleaner’s bed that seems to connected to a recent kidnapping. The kidnapped is a logic expert and is sending out clues only Jonathan can decipher. That sounds way more interesting than it actually is.

REVIEW: This final instalment in this revived series of Jonathan Creek began with plenty of promise when a genius computer programmer is kidnapped in order to gain ransom from her politician husband. Overall it is perhaps the most satisfying mystery of the series but it’s still rather strangely executed and the persistent problems of the current run are all present and correct.

The set up is intriguing but then it’s back to twenty minutes of seemingly domestic filler with Jonathan and Polly and life in the village. There’s just too much dissonance between this s domestic idyll and the twisted mysteries and it takes a series of bizarre contrivances to let Jonathan anywhere near the crime.

This week that involves Jonathan’s cleaner Denise (Josie Lawrence) mistaking her husband’s friend for a male escort, before he dies of a heart attack and she enlists Polly to take the body back to his house.  Yes, that is exactly as dumb as it sounds. Then later she finds the kidnap victim’s watch in her bed. This all happens just to get someone in the right place at the right time. It’s all very well having a contrived solution if it can be justified, but if the set up relies on a number of coincidences then it can prove somewhat alienating.

The solution is reasonably satisfying and it involves Jonathan using logic but it’s all such hard work to get there. Why David Renwick has created so many obstacles to get in the way of Jonathan doing what he does best is the biggest mystery of all.

What is the point in the character of Polly? Fine, we can accept that Jonathan has matured and settled down but why have a character who isn’t interested in Jonathan’s powers of deduction and rather discourages him from using them. It doesn’t serve any story purpose and it does nothing to endear her to the audience.

Why is there so much filler in all these episodes? There was no need for Jonathan to meet up with a woman whose baby he once delivered just so they could use her skills as a meteorologist off-screen later on. Then there’s John Bird’s character who brings a heron around for Jonathan to see for no discernible reason other than a weak joke about texting. And the title of this episode is ‘The Curse of the Bronze Lamp’; a lamp that Denise thinks grants wishes and she shows it to Jonathan and then bad things happen. It’s so incidental there was little to no point of it being there.

In the past, Jonathan was actually involved in the mystery and you would have spent time with those it affected rather than filler in this village of freaks. Here he basically trips over the mystery and solves it from afar. You can progress the mystery through characterisation but here it began with our victim delivering handy exposition about her brilliant mind. Her husband makes a brief appearance but it was hardly worth bothering because the episode was too busy to get to know him with all the other tedium going on.

With good ratings for this run, audiences certainly want to see a new series of Jonathan Creek, but this barely qualifies.  If the titular character has grown into a bored, married advertising executive who spends most of his life going to dinner parties  then he isn’t one worth revisiting. Goodbye Jonathan, come back when you remember who you are.