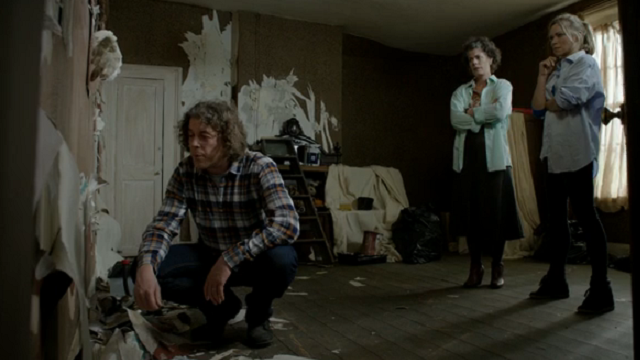 SYNOPSIS: Jonathan must figure out how a psychic wrote the winning lottery numbers on his wall decades before a local man got lucky. Then there’s some other stuff with church meetings, masked burglars, people pissing in gardens, a mysterious beast and Polly having nightmares. It’s all gold, honestly.

REVIEW: At one point in this episode Polly states “You’re not living in a windmill any more” and the whole audience sighs and wishes that he were.

What is this show? It isn’t Jonathan Creek. Far too much time is spent in middle class tedium. If people wanted to spend their leisure time at dinner parties and on church committees then they wouldn’t be watching television. Since we are, maybe it might be a nice idea for the producers to provide the show that everyone remembers. You know, the one about a master illusionist solving impossible mysteries? Instead we have this terrible comedy drama about a defeated husband trapped in a marriage with no chemistry who occasionally gets involved in a rather uninvolving mystery.

This week’s puzzle involves some numbers found on a wall which apparently predicted a lottery winner years before it happened. A return to the world of magicians is most welcome but it’s almost as if writer David Renwick is tantalising the viewers, knowing that’s what we want to see before yanking away the intrigue.  This mystery is well executed with Jonathan getting into full on connecting the dots mode, although watching films and looking through records hardly makes for an exciting investigation. It’s a decent strand if perhaps a little slight. If the surrounding content was up to this standard then this might have been a solid instalment.

Polly’s past comes back to haunt her for the second time in as many episodes. This time it’s repressed nightmares from her childhood. This thread actually provides a decent sense of foreboding with some appropriately creepy direction. It looked as though it might be building up to something bigger next week, but it’s resolved by the end when she remembers her rabbit once got put down. It’s almost as if there’s nothing for this character to do in the main narrative so she’s given pointless B-plots to fill time.

Once again, there are far too many strands going on and the episode wastes much of its run time setting up pointless threads before it gets anywhere near its central mystery. One plot involving a mysterious village beast which turns into a weak joke about press ethics is an utter waste of time and a running gag about w**king receives more prominence than it really deserves. It’s unclear why there are armed thieves around and really why everyone is pissing in their gardens other than to serve as reminders for one of the other plots. That just isn’t enough justification.

When making a comeback, it’s important to remember what people liked about a show in the first place. Evolution is fine; in fact it’s welcome but if you’re going to attempt a reinvention, it better be superior to what’s gone before. This doesn’t even come close. It’s all just a little disappointing.

Episode 2 of Black Mirror is both disturbing and worth watching.