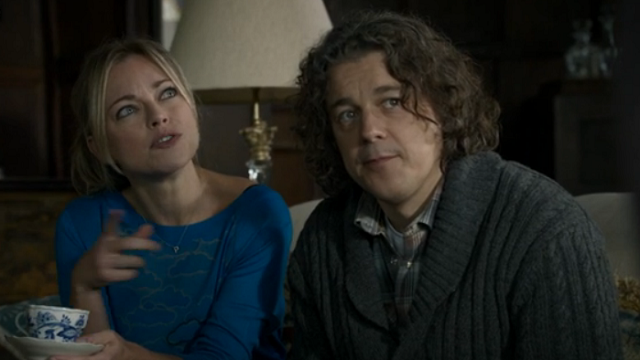 SYNOPSIS: Jonathan investigates the case of a theatre star who was apparently stabbed in an empty room while mentoring Ridley, a young and clueless wannabe criminologist. Meanwhile his wife Polly must deal with a dark family secret following the death of her father.

REVIEW: If you took the Doctor out of the Tardis and removed his sonic screwdriver would that show still have the right to be called Doctor Who? Similar questions might be asked of Alan Davies’ investigator as Jonathan Creek has moved out the windmill, stopped designing magic tricks and no longer wears that iconic duffle coat.

There are iconic elements of any show that help define what it is. The unusual living arrangements and profession made Jonathan Creek someone unusual and those circumstances perfectly fitted with the idea of solving seemingly impossible mysteries. As star Alan Davies has pointed out in recent interviews, no one would wear the same coat for 17 years but Jonathan Creek isn’t a real person, he’s a character. Poirot might not have had the same stupid moustache for 50 years, yet it features in all of Christie’s descriptions.

Having Jonathan as a married, upper-middle class advertising executive living in the country just changes the tone of the show and you wonder if David Renwick might not rather be writing something different altogether. Creek’s personality traits are still the same but none of this episode feels like a natural setting for the character and you wonder how he  could have ended up so distant from his roots. You might not particularly want to see an old Indiana Jones, but if you have to, he better have a whip and a fedora.

Many of these new elements including Polly (Sarah Alexander) were introduced in last year’s special ‘The Clue of the Savant’s Thumb’ but there it was implied that Jonathan had drifted away from investigating and in that episode he had his logical mind awoken. There it also helped to have Sheridan Smith’s Joey Ross on board, who has served as co-investigator throughout the one-off specials from the last decade. Throughout the show’s run, cast members have come and gone but the essential elements remained; here other than Jonathan, nothing is familiar same including the format.

The main mystery is shown to the audience as it happens, Columbo style, rather than through investigation so it feels less intriguing when Jonathan inevitably solves the case. Rather unusually there three mysteries in this episode, at least one of which involving a robot vacuum cleaner seems like nothing more than filler. The other involving Polly’s long-dead mother’s mysterious lover feeling somewhat contrived. What they do serve to do is show the kind of mystery this show deals with and draw Polly into Jonathan’s old world so in some ways this episode serves as a new pilot for new viewers

If Polly is going to be helping Jonathan then you want her to like the investigation rather than complaining about it. Creek’s other partner’s in crime have all driven him towards mysteries with Maddie being an journalist, Carla working on a crime-solving TV show and Joey being another investigator of the unexplained. It seems like the show will now have to find some form of elaborate contrivance to bring Jonathan into the mystery from his new cosy life. Here it was a stabbing at a musical, perhaps next week someone will have poisoned the jam at the village fete.

All that said, the genius of Renwick sometimes shines through. There are some delightfully morbid moments of humour and some fine lines and while the digs at Sherlock and Lloyd Webber musicals are perhaps easy, they are fun and well executed all the same.

When an iconic show returns, there are always high expectations. This first episode didn’t come close to match the early days of Jonathan Creek, and if the next couple fail to recreate the intrigue of old, then maybe it’s time for the investigator to retire for good.

What does the new season hold for Nick and Jess?

The Doctor and Clara return for this series 9 premiere