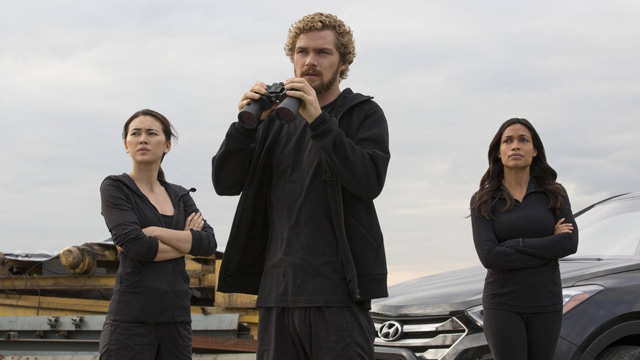 The road to the Defenders has been a somewhat rocky one. Indeed, in many ways, it mirrors the original assembling of their big screen cousins The Avengers.

The first Daredevil series, like the first Iron Man film, took a largely disregarded and second-rank Marvel hero and despite the odds produced a hugely engaging, entertaining and impressive piece of superhero action.

The second instalment of Daredevil, like Iron Man 2, turned out to be decidedly more patchy — overblown and slightly less focused than its original, but with bigger set pieces and more of a focus on integrating the character into the sliver of the MCU being set up on streaming TV.

In between fell The Incredible Hulk, a flawed but likeable attempt to take a difficult, supercharged character with personal demons from the comics and translate them to the screen, which a few nods aside felt largely divorced from the wider MCU set-up.

Likewise then with Jessica Jones, charged with adapting one of Marvel’s most tricky, popular characters, a job the Netflix producers managed with a decent amount of success, while setting up the forthcoming Luke Cage show in the same breath.

But following on from last year’s Luke Cage series, and in the pantheon of Avengers set-up films, Iron Fist feels decidedly more Thor than Captain America.  Which is unfortunate given it has to do much of the heavy lifting to set up the threat which the Defenders will face later this year.

The reaction to Iron Fist has not been kind, pretty much since its announcement. The casting of Finn Jones as Danny Rand, while comics appropriate, sparked debate over whitewashing and ignorance of the show’s Asian leanings in the 21st century.  The first set of reviews, based on the show’s front six episodes, didn’t help matters, putting the cast on the back foot in interviews and giving the launch a gloomy, troubled feeling.

So let’s put aside the controversies, the criticisms and the collective opinions, and see what Iron Fist reveals itself to be as a whole entity.

The biggest problem with Iron Fist is that it’s all so pedestrian.  Swap out the kung fu for compound bows and you wouldn’t be a million miles away from the various seasons of Arrow that have been flung about over the years.

The mix of street level violence and corporate machinations feels very bland.  Of the five series so far, this is the most by the numbers, largely because it feels like other shows have been there before.  It doesn’t help that the dialogue is crunchingly dull, either.  There’s little wit or warmth to the show.

Perhaps the setting doesn’t help.  So far most of the Netflix shows have been at ground level New York – Hell’s Kitchen and Harlem, only occasionally venturing outside the five boroughs or even upwards into the city’s skyscrapers.  But here the action is divided between boardroom and dojo, and even takes a hysterically badly executed diversion to China – depicted as basically looking like the same warehouses as New York but with some Chinese signs on the wall.

The comics series is, beyond the most recent run of Power Man and Iron Fist, one I confess to not being hugely familiar with but what I do know of Danny Rand and his world from the printed page, it doesn’t feel like this.

Perhaps the problem is the villainy.  The Hand, when we saw them in Daredevil, were faceless ninjas for Matt Murdoch to beat up, with only the briefest glimpses of their scheme.  Here they’re front and centre, given voice and face through Madam Gao and Bakuto, but there’s nothing particularly exciting about that voice.  Their primary villainy — dealing a new kind of synthetic heroin which they’re using Rand Enterprises to ship in — is tiresome and feels unworthy, with only hints of the bigger story, started in Daredevil, being explored.

Faceless or not, they’re not presented as much of a threat to the Iron Fist, Collette Wing or even Claire Temple, who manages dispatch more than a few after just a couple of self defence classes.  The only real thing of note is that Madam Gao constantly refers to the emergence of Daredevil and Luke, but never acknowledges Jessica Jones. Will the angry cotton bud be the Defenders’ secret weapon, then?

That said, the much criticised combat sequences only feel problematic if you either expect every fight to feel like Yuen Woo Ping was overseeing the choreography, or expected that Iron Fist would feel like imperial-era Shaw Brothers.

The difficulty is that Daredevil set an exceptionally high bar for the Netflix shows right off the bat, particularly with the much-vaunted corridor fight. With the Luke Cage and Jessica Jones shows, where the characters have super strength and rarely get overmatched, much of the fight sequences were literally tossed off — the bar brawl in the latter, for example, where Jessica and Luke barely break a sweat.

There’s little actually wrong with the fight sequences in Iron Fist.  They’re well executed and staged, like most action TV series these days. They’re perhaps not as visceral as Daredevil, but it is notable the best one comes in episode eight, during the otherwise ludicrous China diversion, with former Mortal Kombat and Arrow helmer Kevin Tancharoen directing, giving a sense of danger to the weapons brawl and a sense of comedy to the almost Drunken Master ruck with the watchman.

Indeed, if anything really hampers Iron Fist it’s the direction. Tancharoen and RZA aside, few of the show’s directors have much of an action TV background — indeed, they come from the likes of Downton Abbey, Mr Robot, Doctor Who and in one case Neighbours.  Nobody’s questioning their competence in the chair, but Iron Fist’s flat feel is definitely it’s Achilles heel.

There are some things going in its favour.  Jessica Henwick and Rosario Dawson, playing Colleen Wing and the returning Clair Temple, provide an excellent foil to Jones’ Danny Rand, while Jessica Stroup’s turn as Joy Meachum.

Jones himself isn’t particularly bad in the role, which feels underwritten at times to make him some kind of naive fish-out-of-water, but never manages to fully embrace the potential that has.  The best we see of him is in Bakuto’s compound, where we get a real sense of the playful yet focused Danny Rand – a more grown up version who will presumably be the focus of the Defenders.

Balancing that are some brutally painful performances from Tom Pelphrey and David Wenham as son and father combination Ward and Harold Meachum.  Both characters, written as if they’re vague knockoffs of Patrick Bateman, explode off the screen like Brian Blessed overinflated with helium, showering any scene they’re in with the acting equivalent of shrapnel.

But perhaps the finest stand-out in Iron Fist is the music. Trevor Morris’ electronica-heavy score is hugely atmospheric, and reminiscent at times of Mac Quayle’s work on Mr Robot.  It creates an unusual bed and modern tone for the action in the show, as distinctive as the beats of Luke Cage or the discordant jazz of Jessica Jones.

It’ll be interesting to see if the cliffhanger payoff comes in a second Iron Fist series, or in the Defenders.  The show ends on a note that needs resolution and could generously be described as sequel hunting.  But will that resolution come with the crossover or will Defenders skirt round that, the way Age of Ultron threw Falcon and Cap’s crusade away with a couple of lines of dialogue so everyone could enjoy the party in the meantime?

Ultimately the first adventure of Danny Rand proves to be perfectly competent and serviceable, but nowhere near the impactful set-up the Netflix series’ needed ahead of their big crossover.  It’s less Enter the Dragon, and more the Iron Foot Fist Way.

The Avengers: An American take on a British classic

Despite the unsuccessful and unsatisfying cinematic take on The Avengers in 1998, it seemed Hollywood was too in love with the concept of 1961 British spy series to leave it there.

Here’s a new poster for Avengers: Age of Ultron

There’s no denying that this is a somewhat busy poster. Being harsh you might say that it’s a poorly photoshopped mess…