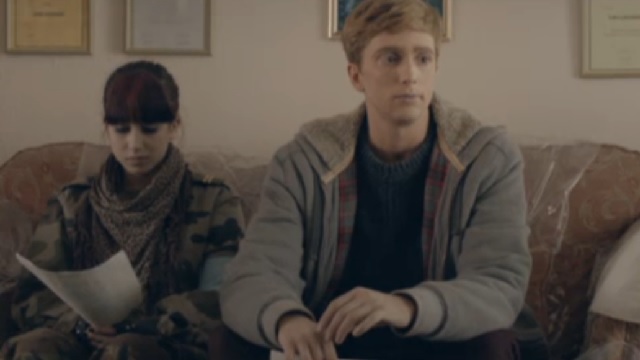 RECAP: Kieren faces up to his past and confronts the parents of the girl he killed and ate during the uprising. A violent encounter makes Amy decide to leave town. Bill is unable to deal with Rick’s betrayal in picking ‘rotters’ over his wishes with tragic consequences.

REVIEW: After a slow start, in episode one, this show has grown in strength with each passing episode. What was perhaps missing from the opening episode was the dark humour which is clearly present here. The support group scene with the PDS festishist’s letter being read out provided some amusement as did the aftermath of Amy’s one night stand with Phillip. That’s all early in the episode and that lightness proved necessary to prepare for the darkness that followed.

Amy’s world comes crashing down as a member of HVF forces her to put make up on. It’s a well handled scene with allusions to rape, ultimately breaking her air of invincibility and in some ways a loss of identity, at least in Roarton. As she appears with her human makeup in the next scene, she’s more vulnerable, forced to hide from the prejudice around her.

The main theme of this episode was acceptance. It seems now that the town of Roarton is coming to terms with the undead living amongst them, clearly seen in the Amy and Phillip scenes but most notably in the reparation of the relationship between Kieren and Jem.

The scenes between these two characters are touching and believable. The flashbacks to the days of the uprising shows that it was his sister was there and couldn’t bring herself to kill him. His remorse is what brings them together. His meeting with the parents of the girl he killed could so easily have been a bleak confessional but their blind faith in the hope that she might come back in a zombie adds lightness and a little tragedy. Ultimately Kieren gives them a little hope and that restores his sister’s faith in him and breaks down her walls of bravado.

That of course is part of bringing the whole family back together. In the previous episodes their parents have been incredibly bland but that was the whole point. Kieren’s death destroyed the family with Jem became raging and militant and the parents repressing all emotions. Here finally after being emotional zombies they let it all out and tell Kieren how they feel.

In the cauldron of Roarton, not everyone is going to accept the new order. Bill, leader of the human volunteer force and father of PDS military hero Rick has been the antagonist throughout and finally snaps. He’s been in denial about his son’s condition and when he is finally confronted by the truth, the results are tragic. In the gay metaphor of this show, this is the coming out scene and it’s fair to say he’s not the most liberal father, encouraging his son to kill the ‘rotters’ who are just like him. Writer, Dominic Mitchell sets it up as though Bill is going to go on a rampage, which makes his real actions all the more horrific.

The foreshadowing of Rick’s death with the restoring of his shrine is brutally chilling.

Steve Evets performance as Bill is excellent and you truly believe his decent into madness as he is pushed on by the religious propaganda of Kenneth Cranham’s Vicar Oddie. The murder of Rick is brutal and heartbreaking but it takes this death for Kieren to learn that he has grown and changed since the first time it happened.

The seeds were also sown in episode one for Bill’s demise with the murder of Maggie Burton. The role of her husband Ken was a small part for an actor of Ricky Tomlinson’s stature but it was an appropriately powerful one as he shot Bill in revenge, not only for his wife but for Rick.

Kieren has grown from a suicidal self involved teen to someone who recognises the consequences of his actions. Rather than getting sucked into the danger of the season two (we hope) plot set up of the undead prophet like Amy, he chooses to stay and fix things with his family. He puts their feelings first and sees this second life as a new chance.

It is a soap. It is a family drama. It has zombies in it but these elements all combine to great effect and it really works. There’s plenty more ground to be explored in this show, and with Being Human cancelled hopefully there’s room for six episodes of this supernatural soap on the schedule.

If not, then these three episodes are a joy and tell a compelling story in a brilliantly realised world.

Teaser trailer for series 2 of In the Flesh

In this week’s Big Bang Theory, Leonard decides it’s time to move out. Do you think there will be any consequences?