TV REVIEW: IN THE FLESH SERIES 1 EPISODE ONE 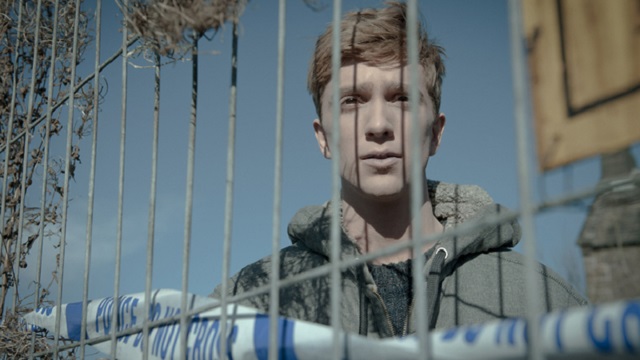 RECAP: Kieren Walker leaves a treatment centre to his home town of Roarton, but things have changed since he died in 2009. He’s suffering from Partially Deceased Syndrome, otherwise known as being undead. His parents, Steve and Sue, are pleased to see him, but his sister, Jem a member of the zombie fighting Human Volunteer force isn’t so keen and her compatriots want to eliminate all the PDS sufferers they find, just like they did during the rising.

REVIEW: So how would Ken Loach make a zombie film? There’s a bleakness about this entire set-up from the grey tinted cinematography, to the northern town setting. The town hall scene where a government minister addresses the northern town of Roarton could easily be from an 80s set mining film. It’s a small town where the people feel abandoned those they elected and have decided to take matters into their own hands.

Just as Russell T Davies reintroduced Doctor Who in 2005 using the language of soap opera, this drama uses a similar trick showing how different members of the town have been affected by the uprising. This all focusses around Kieren Walker, as played by Luke Newberry and the impact his return has on his family and the town. It’s all a nice little microcosm with Roarton the last stronghold of the Human Volunteer Force.

As this is a first episode, there is plenty of world building and exposition to get through but this is effectively handled with style. The scene is set for the next couple of episodes

The direction too is effective, building up the tension where required and for fans of conventional zombie films there is some old fashioned zombie action in flashbacks, but for the most part this is a small town drama. For texture the scenes in the zombie sanatorium give the piece a grander scale, and efficiently show the scale of the problem without having to resort to full on zombie apocalypse flashbacks.

The family relationships are believable in particular Jem’s confrontation with her undead brother over his suicide hits a strong note but there is also a feeling that this scene in a slightly different context could just be part of another soap and like in a soap, the narrative interweaves a little too neatly.

HVF leader Bill Macy (Steve Evetts) is an effective bad guy because he believes he is doing the right thing in destroying the PDS sufferers and his slaying of returnee Sue Burton, a defenceless old woman is pretty chilling. But of course he will be placed into conflict when his killed in action son is revealed to be afflicted.

It was his death that lead to Kieren’s suicide in the first place and so his acceptance back into town will surely be tied to the mellowing of his biggest enemy.

The problem is, in the best zombie movies, the zombies serve as a metaphor, be it for mindless consumers or drug addicts.There are some religious overtones but it’s not yet clear if they amount to more than using good words from the Bible because it makes the show sound deep or if zombies might represent non-believers in some way but this will more than likely be explored in the following weeks.

However this may change over the next two weeks and the show has laid plenty of groundwork to explore perhaps most intriguingly the undead prophet, giving purpose to the undead. Overall, a strong but unspectacular first episode but there’s certainly enough to keep viewers coming back.

Teaser trailer for series 2 of In the Flesh

In the Flesh asks you to Say no to Blue Oblivion

Be vigilant when clubbing. You are not alone