TV REVIEW: HOW I MET YOUR MOTHER SERIES 9 EPISODE 4 ‘THE BROKEN CODE’ 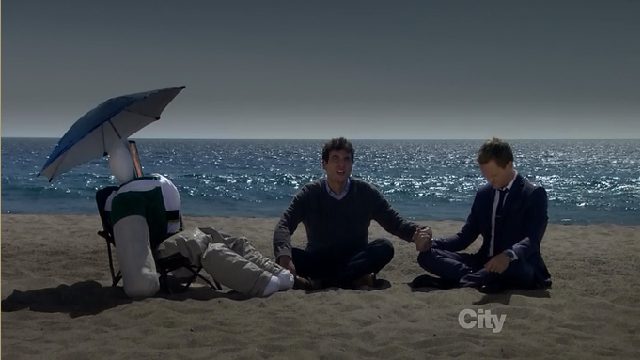 SYNOPSIS: 51 hours before the wedding. Barney confronts Ted over the events at the carousel and is apparently satisfied with Ted’s explanation that he was just helping a friend. However he later forces Ted to do a number of duties which involve him going beyond the call of duty, later revealing that he thinks Ted broke ‘The Bro Code’ bringing Marshall in to make a judgement. Meanwhile Lily reveals Robin’s Bachelorette  Party was such a bust because Robin can’t make friends with other women.

REVIEW: How I Met Your Mother returns to more conventional ground with the gang reunited (kind of) and the boathouse at Farhampton serving as a surrogate McLaren’s. That also means the episode falls into some pretty old patterns,but the familiar can be comforting.

Marshall returns courtesy of Marshpillow, Lily’s body pillow that she likes to dress up in his clothes when he’s not around. He’s been upgraded to Marshpillow 2.0 which means lily has stuck a tablet to the pillow’s head and Marshall can facetime the group just like he’s really there. Actually it’s not like that at all. It’s fine for a couple of time lag time jokes but really, why isn’t Marshall there already? How much mileage can you really get out of this? Surely he can get a flight from Wisconsin. We get it, Jason Segel is busy. So either write him out until he’s available or don’t use him at all. This desperate ploy of having him in every episode without really being there will hurt the show over the long term.

Barney’s initial encounter with Ted feels something of a cop out. After a lame explanation, he accepts Ted’s protestation that he was just being a good friend. After the tension they built up at the end of last week’s episode, it seemed a little cheap to get over it just like that. In retrospect it’s probably a little too early for Ted to destroy the wedding. Barney’s passive aggressive moves against Ted , including moving him to the basement with the doves, are fun enough although you get the impression that Ted secretly really enjoys writing place cards in his immaculate script.

The best gag in this segment comes in with the return of “the real Karate Kid” William Zabka who replaces Ted as best man. It seems he’ll be coming back for revenge on Ted after  he was restored as best man.

The stuff on the beach with Ted and Barney re-enacting Ted and Robin’s moment probably should have been more heartfelt but it really feels like the show is parodying itself. That moment with Robin worked because of the emotional content. Here it never feels as if there is any real fight. Perhaps it’s undermined by the use of the promotional tie-in version of “The Bro Code” which feels like a horrible piece of self-indulgent product placement and actually is slightly world breaking.

While Barney and Ted are having problems, Robin and Lily are also having some issues. Robin is upset that Lily didn’t invite any of her friends to her Bachelorette party but it turns out Robin doesn’t have any female friends. Given what’s been seen on the show, it’s not that surprising. It seems that the lead cast only ever hang out with each other, although magically many friends appear when required like with Lily’s wedding shower in season 2 but these friends are never seen again.

Lily tries to help Robin relate to other women and this provides some decent one liners for Cobie Smulders to deliver before Lily realises she doesn’t want anybody else talking to her best friend. That seems like a fairly genuine response and the kind of selfish behaviour that these characters have indulged in for many years. That said, it does seem they are manufacturing tension to give Lily something to do in the absence of Marshall.

This episode is all rather middling and with the wedding still most of season away, that’s slightly worrying. Hopefully these events have killed a few hours and there will be more mother mythology revelations before too long, say around Sweeps time?

Marshpillow was first seen in the season 6 episode ‘Desperation Day’

LILY:  I hope Marshall gets here for the rehearsal dinner, he’s somewhere in Wisconsin in a rental car.
TED: Hertz?
LILY: I mean it hurts a little but I’m not going to cry about it.

LILY: Just be yourself, say something nice.
ROBIN: Which one? I can’t do both.

BARNEY: You still have feelings for Robin?
TED: WHAT? WHAT? WHAT? Okay sometimes I do.
BARNEY: Then turn them off.
TED: I would love to but it doesn’t work that way. I’m a human being – I don’t have an off switch.
MARSHALL: I’m shutting off.

Can Dexter Fletcher capture the magic of the musical on the big screen?