TV REVIEW: HOW I MET YOUR MOTHER: SEASON 9 EPISODES 23 AND 24 ‘THE LAST FOREVER’ 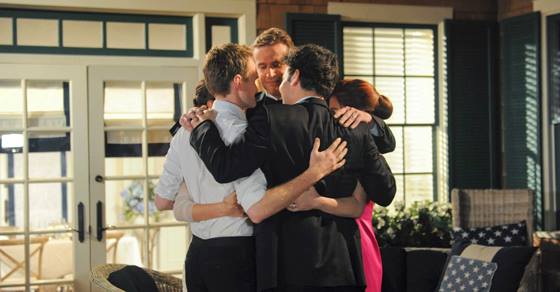 SYNOPSIS: In the years after the wedding, we see how the lives of Ted, Robin, Marshall, Lily and Robin play out until the year 2030.

REVIEW:If you’ve been watching a show called How I Met Your Mother for the last 9 years and wondered why the title character didn’t make an appearance until the final season, then wonder no more. It’s just that the title was wrong. In a review from earlier in the season I suggested that Getting Over Robin might have been a more appropriate title; how wrong I was.

There was a time when the audience were on the side of a Ted and Robin coupling, but writers Carter Bays and Craig Thomas did some amazing work in helping us get over that, in making us realise that these characters simply weren’t right for each other. We’d come to accept that hopeless romantic Ted had just got it wrong, and in the end this bitter experience would help him realise that this wasn’t true love, and when he found it he would truly know it.

Instead the relationship with the mother of his children became almost an afterthought, to the point where you wondered why she was even introduced at all. Her name is Tracy by the way, as if that matters. It was Robin he wanted all along and in 2030, it was Robin he got.

The structure of the episode was ambitious, with it taking the characters lives forward up to 2030 when Ted is telling the story, interestingly Bob Saget’s voice being replaced with Josh Radnor’s as we catch up. It chronicles Marshall’s rise as a judge, and having more children with Lily, and how Robin and Barney got divorced and Barney reverted to his worst and Robin became a career driven loner.

Yeah, they got divorced. So why the hell have we spent an entire season at this fricking wedding? More than that, we first arrived here in season 6. It’s supposed to mean something. This story is supposed to matter. It’s destiny; it’s magic. This wasn’t that, this felt too much like real life.

You might believe Robin would become distant, she’s always had that in her and even on the wedding day she was never really sure. But Barney, they developed Barney to the point where he was ready to be an adult. To see him bringing back the Playbook and aiming for a perfect month just seems sad. Yes, he gets redemption with a daughter but it just didn’t feel right. It was like listening to a great rock song that turns into a weak ballad in the final verse.

The thing with a sitcom is, the characters and situations don’t really change throughout the run. Sure dynamics change a little but it’s the same people usually hanging around in the same places. This episode asked what happens after that, when there is neither the situation or actually the comedy. People move on and bad things happen. But this is television, don’t we deserve a bit a magic too? Instead it feels like all the character development from the past several seasons has been thrown out to tie in with the final scene with the Ted’s kids talking that were recorded during season 2.

Might it have made more sense to actually play out these years as the final season, rather than the wedding weekend? Maybe. There were certainly more stories to tell. What was the point in getting the audience to fall in love with the mother character before tearing it away without so much as a goodbye?

It’s probably a finale that people will still be talking about for years to come but that doesn’t necessarily make it right.

People might say that it’s all about the journey but they’re wrong. Endings matter and they really matter on TV. They sum up the reason you’ve invested your time and confirm the things you believed in. The end is a test of faith in the writers and when they let you down, you stop believing.

Carter Bays and Craig Thomas created something special. Their use of structure and running gags was excellent and they made a great show; a show worth investing time in but it was set up as a fairytale and instead we got a messy tragedy. It was a story of people who get married to the wrong people and spend their whole lives in regret.

This had been set up earlier with Tracy losing the love of her life but damn, it just feels so cold. It should have been a warm hug of an episode, instead it feels like you got caught in the rain. Without a yellow umbrella, I don’t want to be there.

How I Met Your Mother’s has a weak second episode and points out that men and women sometimes want different things from relationship.