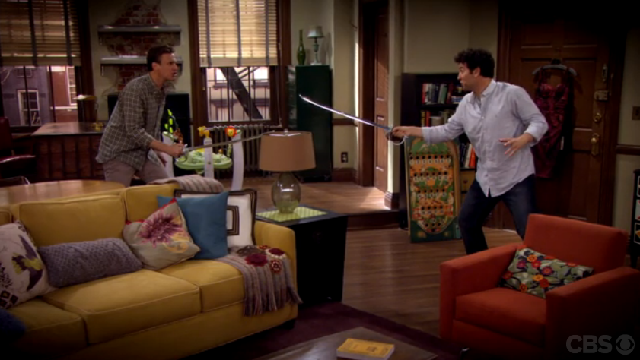 SYNOPSIS 52 hours before the wedding: When Robin and Barney’s elderly relatives arrive, they decide they need to have sex to make them feel young. Lily finds Ted’s list of all the things he wants to do before leaving New York and encourages him to stop avoiding Barney. Marshall’s still on the road for some reason.

REVIEW: What might have been a routine episode is saved by an ending which packs a double punch of emotion and shock. Lily’s speech to Ted is a great piece of writing, fantastically delivered. Then once it seems Ted’s feeling have been resolved Barney reveals that he witnessed Ted and Robin’s moment in the park.

There’s nothing wrong with some light relief, it is a sitcom after all, but after a certain amount of time the antics and adventures of any group become repetitive and meaningless. Consequences are important and now the end near, it’s good to see that the small moments might have a big impact.

Robin is the cause of all fractures in Ted and Barney’s relationship. It was after Robin and Barney slept together for the first time in season 3 that Ted declared their friendship over. It took a some severe injuries for them to make it up after that but the upcoming nuptials have been causing some problems in the romance.

In season 8 episode ‘Romeward Bound’ Barney warned Ted after he tried to give him advice about Robin telling him “Robin’s marrying me, not you,” in what was perhaps the most tension-filled moment between these bros.  With the confrontation in this episode , it seems Ted’s status as best man could be in danger but we’ve already seen that he makes it to the reception. Much remains unsaid between Ted, Barney and Robin and you can’t help but think that somebody is going to start saying it.

That will have to wait for next week and while it’s those closing moments that will dominate thoughts, the actual content was nothing special. Robin and Barney’s plot hiding from elderly relatives while they try to do it somewhere naughty (not like that) is fine. The main purpose of this plot appears to be getting them into a room with Robin’s grandparents so they can see that they still enjoy the physical side of love. It seems essentially another way to convince the audience Barney is serious about his relationship with him wondering how things will play out with them in 60 years. The writers might be hammering this home at this point but it’s probably necessary after the flippant and rushed engagement.

The scenario does prove to be a decent vehicle for jokes with the continued presence of James being welcome and the idea that old people can sense Mandy Patinkin is a particular highlight. Patinkin provides some thematic linking as we return to Marshall and Ted’s sword fighting and pretending to be Inigo Montoya, his character from The Princess Bride.

It’s nice to see that old apartment again as the events of April 26th are explored in flashback. It’s also nice to see Marshall interacting with another series regular and it’s a good call back to events from season 1 when Lily got stabbed with a sword. This time the sword fighting leads to the tearing of Lily’s dress and then later when Lily and Robin realise how much fun the fighting is, the destruction of a $600 bottle of scotch.

Unfortunately in the present day Marshall is still on his long journey to Farhampton now driving through Wisconsin with Daphne, who has apparently bonded with Lily over the phone. You can sense that this journey is just going to go on far too long already. There’s plenty for Marshall do it at the wedding unless something really significant is going to happen on the road, this journey needs to be cut short.

The real emotional core of the episode is the conversation between Ted and Lily. While Ted usually claims Marshall is his best friend, Lily has always been there and knows him better than he knows himself and is probably going to be key in his relationship with future Mrs Mosby.

This season is bubbling along very nicely and it’s good to see everyone has upped their game. The wedding format is proving flexible and there are plenty of events to jump around time to explore. Only Marshall’s story seems inconsequential but perhaps that will change over time and that’s a small gripe when overall, everything else is so satisfying.

Marshall is expected to arrive by the rehearsal dinner. ‘The Rehearsal Dinner’ is the title of episode 13

LILY: My name is Rodrigo Degoya, you killed someone I love, prepare to dance.

BARNEY AND ROBIN TOGETHER: We have to have sex right now!