TV REVIEW: HOW I MET YOUR MOTHER SEASON 8 EPISODE 24 ‘SOMETHING NEW’ 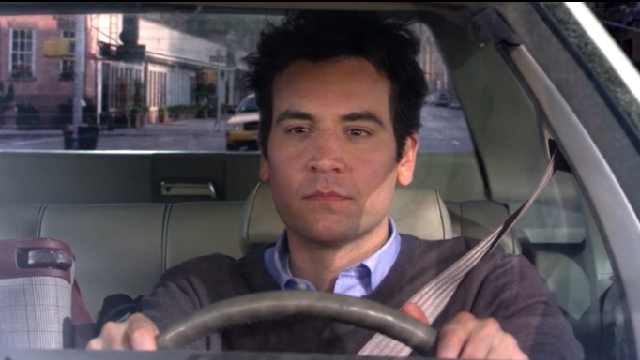 SYNOPSIS: The gang are all tying up loose ends before the wedding. Marshall takes Marvin to visit his family in Minnesota before the upcoming move to Rome. Robin and Barney try to break up an obnoxious couple in their favourite restaurant. With Marshall away, Ted and Lily visit his now fully renovated house as he reveals he’s selling it and plans to move to Chicago right after the wedding. Oh, and some girl with cute boots, a bass guitar and a yellow umbrella catches a train to Farhampton.

REVIEW: If you ever doubted Carter Bays and Craig Thomas could pull off a nine year love story in reverse then it’s time to put on your humble pants. As we arrive back at Farhampton right where we started this season, they deliver simply wonderful television.

There has been a lot of filler this season; that’s the nature of a 24-episode season. In the earlier years there were simply more stories to tell about people hanging out in their twenties. As time has gone on, some of it has seemed contrived but when you get down to the heart of the show and deep into the mythology, the writers and director Pamela Fryman always deliver.

Some of tonight’s story might have seemed slight, in particular Robin and Barney dealing with an obnoxious couple in the restaurant and plotting how to get their revenge after a clash, but this strand is there just so we all know they are perfect for each other. They’re not really very nice people, scheming and plotting to break-up another couple and getting kicks out of it but they make each other happy. Despite everything, Ted deserves more than Robin can ever give him.

That takes us nicely back to last week when Ted dropped everything and missed a big interview to help Robin find her locket – her ‘Something Old’ – that she had long ago buried in Central Park. That perfect rom-com moment when it starts to rain might have made many think that she was going to leave Barney for Ted but it’s more about Ted remembering that she’s the girl of his dreams. He broke the look and left her in the park without the locket.

Since Barney and Robin got engaged, Ted has been heartbroken, maybe that explains why his romantic life has been so scattered this season, but now he’s acting like an adult and preparing to leave town, unable to watch the woman he loves and his best friend settling down together, especially since Marshall and Lily won’t be there to support him.

Marshall’s trip to Minnesota might mean Jason Segel doesn’t get much to do in this episode but it splits up Marshall and Lily so he can receive the big news that’s going to change the couple’s plans. With his career apparently on a downward in previous episodes, it seems his dream of becoming a judge is going to be realised. Will he give up his dream for Lily, or will she for him?

More importantly with Marshall and Ted out of the picture it allows Lily some alone time with Ted in the now completed house. Seeing that wall where every week Ted recites inappropriate stories to his children is a punch the air moment. The promised future is really falling into place.

Lily, as everyone knows, is a master manipulator. Nothing happens in the lives of the gang that Lily doesn’t somehow control, in particular with Ted and his love life. She realises he’s leaving town because he’s given up on true love and gives him some ammo to change everything. She knows exactly where Robin’s missing locket is and she shares that information. Where would we be without a flashback? Remember kids, in this giant How I Met Your Mother mosaic everything is important.

Back around the time Ted was getting married to Stella, it was Robin who was heartbroken and getting drunk. In her wasted state she took Lily to the park  to get her ‘Something Old’ before passing out and forgetting everything. It’s been in Ted’s desk all along and he’s going to give it to her as a perfect wedding present. Although perfect for who is perhaps a bigger question.

Lily’s act is not one of a concerned friend. She knows she’s throwing a grenade but to help Ted find happiness, she knows there has to be one final play.

The end of the episode focuses on the faces of each of the gang in the final hours before the wedding – the calm before the storm. Marshall is anxious, Barney is content, Robin happy but with doubt in her eyes, Lily anticipating chaos and Ted with a new resolve.

That might have been enough but hey, this is a season finale and next year really is the end, so we finally get to see ‘Something New’ -the woman who will change Ted’s life forever. The girl with the yellow umbrella buys a train ticket to Farhampton. It’s been a great journey, but that really is the final destination.

THE GIRL WITH THE YELLOW UMBRELLA: Ted’s bride to be is finally revealed and she’s played by Cristin Milioti. Will she be a series regular next season?

LILY: “Ted. Be careful” – on him giving the locket to Robin

MARSHALL: “I’m not good at big decicions”  – on trying to decide to become a judge

ROBIN: “A week from today we are going to be legend – wait for it …”
BARNEY: “…married.”
BARNEY AND ROBIN “Legend-married!”