TV REVIEW: HOW I MET YOUR MOTHER SEASON 8 EPISODE 23 “SOMETHING OLD” 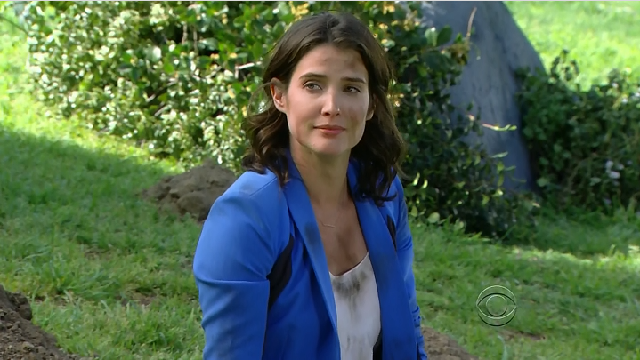 SYNOPSIS: Robin digs holes in Central Park searching for a pendant she buried as a teenager as her something old for the wedding, while Barney bonds with her dad at laser tag. Meanwhile Marshall and Lily are preparing to leave New York and need Ted’s help deciding what to trash and what to take .

REVIEW: Sometimes an ending makes an episode. Just a single moment makes the mediocrity that came before and leaves you glowing and anticipating what’s going to happen next. Whatever couple combination you’re “shipping” (yeah it’s in quote marks, I’m not down with your hip lingo) it’s the moments between Ted and Robin that are really the heart of the show. From the moment the show began, it was the story of Ted and Robin, and how he finally lets go of her. She isn’t the mother, but she’s what’s stopping him from moving on, no matter what Ted says.

The Lily, Marshall, Ted storyline could have been pulled out of the HIMYM bag of standard plots but it’s believable for these characters and their bizarre interdependent relationship. Ted is insecure about his friends moving away and as they pack up the old apartment, he refuses to let them throw away an old burst beanbag – the first piece of furniture the three of them bought when they moved in together. But it does feel like we’ve been here before. They’ve suffered the separation of moving out and even Lily and Marshall having children but I suppose this plot is helping to emphasise Ted’s impending solitude, with Lily and Marshall headed overseas and Barney marrying his one true love. Ted’s wants everything to stay exactly the same and the beanbag represents a fond past. Time waits for no man bro.

The Barney laser tag plot with him battling Robin’s father might seem silly and it is, but it exists purely to put doubt in the mind of Robin. While she’s busy preoccupied with finding her pendant, Barney is bonding with her father, perhaps proving to her that they are a little too similar. Robin’s father defines her and winning his approval is always one of her primary motivations. It’s easy to see why she might question being in a relationship with someone like him isn’t healthy or perhaps she’s just looking for an excuse not to get married.

It’s actually refreshing to see Robin freaking out a little about the wedding. Everything has moved pretty fast and over recent episodes Barney has been acting like the selfish bro that made him such a popular character and it seems Robin is okay with all of that because Barney will be Barney. Ted sensed something might be up and warned Barney and of course Ted is the one there for her when nobody else is.

Ted’s love for Robin is pure and stupid and for most of us, easy to identify with. She might be wrong for him but to quote Alison Hannigan’s other great alter-ego “love makes you do the wacky”. In this case Ted’s wacky is to abandon a job interview just to help Robin dig a hole, because he loves her and she’s giving him hope.

It’s refreshing that these later episodes have some real emotional grit and after what has mostly been a mediocre season, the show is finding its voice and what makes these characters tick once again.

There’s just one episode left this season and it seems Robin and Barney won’t be tying the knot until the final season begins in the fall. We know they both get to the church but there are plenty of obstacles in their way. When we get to the wedding, Ted meets his wife to be. Are we really going to see that in the season 9 premiere? Or do writers Bays and Thomas have another time jumping plan up their sleeves?

CONTINUITY: We revisit the triangle – the magical spot outside Marshall and Lily’s apartment where things just disappear. This was first seen in season five’s Robin 101.

TV Review: How I Met Your Mother Season 8 Episode 19

How I Met Your Mother continues to pad out it’s eighth season with mediocrity.