TV REVIEW: HOW I MET YOUR MOTHER SEASON 8 EPISODE 22 ‘THE BRO MITVAH’ 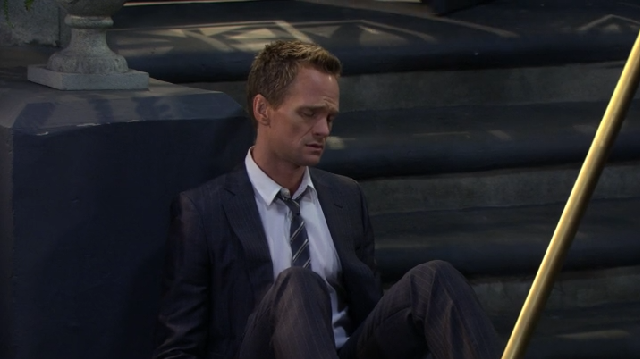 SYNOPSIS: Ted and Marshall kidnap Barney and take him away for the lamest bachelor party ever leaving Robin to have a nightmare dinner with his mother who due to Barney’s lies, thinks Robin is a virgin. It seems things can’t get any worse for Barney until the stripper turns up and its Quinn and when Robin finds out, it looks like the wedding is off.

REVIEW: The one good thing about The Hangover is that it has brought about the end of the crazy sitcom bachelor party episode. Sure, all the ingredients are there for something insane to happen in Atlantic City with Barney let loose but this episode is at least a little bit smarter than that, although the big surprise isn’t really all that surprising.

Ted and Marshall are lame but it’s a bit of a stretch to believe even they wouldn’t be able to organise a half decent party and they must have at least seen enough of The Bro Code to know that bringing Lily along is a definitely bad move. Then again, under Robin’s instruction, they are trying to organise the worst bachelor party of all time, so they have to play up to Barney’s expectations of how lame they can be.

Quinn was always going to show up again before Barney’s wedding and although deploying her as the least appropriate stripper makes the whole situation less dramatic than perhaps it could have been. This was the woman that Barney was engaged to at the beginning of this season and just a few months later he’s ready to walk down the aisle with another woman. Even if it was something of a shallow relationship, you would expect her to be less okay with the whole situation.

The ending with Robin walking out on Barney would have been perfectly plausible, particularly given his behaviour in recent episodes especially and her threats to leave over The Playbook. But as we already know, this romance already has a happy ending. Barney may have taken the big step of proposing but this season he has been scared of letting go of his old life. That somewhat contradicts his maturing over the last couple of seasons. Even in his serious relationships with both Nora and Quinn, Robin has always been in the background.

Then again, this episode perhaps demonstrates exactly how their relationship works. While his whole world may revolve around elaborate games, Robin is really the one in control and she knows exactly how to manipulate him with the most elaborate  play of all – ‘The Barney’.

The whole night has been planned by Robin to give Barney a night he’ll never forget – the worst night of his life. After all they couldn’t possibly top his everyday legendary antics – if you can’t take him higher, then take him low. Cruel perhaps but it’s just another way to reinforce that they’re a perfect match. Robin can put Barney through the same hell that he puts her through.

There are some likable enough comic threads running through the episodes, although nothing approaching outright hilarity. Barney having told his mother that Robin is a virgin is fairly amusing and it’s played nicely enough but perhaps with a little time, more could have been made of the new mother in law situation, maybe next season.

More successful is the appearance of Ralph Macchio as Barney’s nemesis, in particular it’s a pleasure to see Alyson Hannigan’s reactions as she gets to spend some time  with her childhood crush. Barney’s twisted interpretation of The Karate Kid has been  revealed before and it’s good to give him at least one win when he gets to meet the “real karate kid” in the form of William Zabka after some patient build up. He really must be happy to be working…I mean to embrace The Karate Kid legacy.

Similarly Marshall and Ted’s argument over who Barney will use as currency in the game of chance is a strong gag and a nice inversion of Marshall and Barney’s arguments over who was Ted’s best friend in the early days.

While Barney is being manipulated by his one true love, this episode goes to prove that he is still capable of great stupidity and irresponsibility when pushed in the right way. Is Robin really testing him for future marriage? Or is she just proving that she has full control of the relationship? Probably it’s just the writers wanting to have a fun episode before all the emotions and mythology come together for the wedding, but these aspects are bound to come out as Barney and Robin have second thoughts on their big day.

BARNEY: The students have become the intermediate students – on Ted and Marshall’s planning skills

RALPH MACCHIO: It is going to be in…wait for it…credible. Incredible!

QUINN: Barney is suicidal
ROBIN: I know; it’s awesome! – on pulling off a successful prank

LORETTA: Barney deserves it. You know he told me you were a virgin? You are a dirty ho-bag just like me – Barney’s mother on Robin