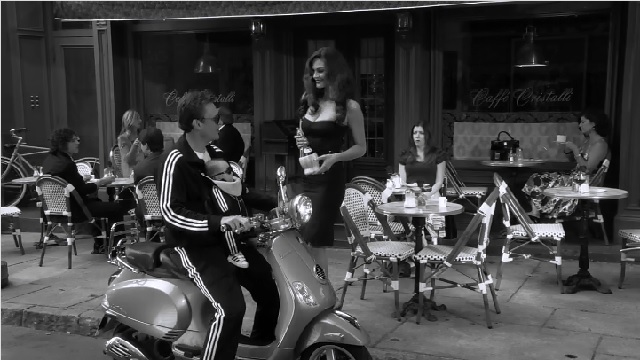 SYNOPSIS: The Captain offers Lily the opportunity to move with him to Rome for a year as his art consultant. Meanwhile Ted and Barney see a girl at the bar who Ted once almost asked out at Yoga class, until he was overawed by her redonkulous body, but even though Barney has turned up the temperature she won’t take off her coat.  It turns out she’s Liddy, Robin and Barney’s wedding planner.

REVIEW: This all feels like rather a slight episode following the tear inducing conclusions of last week’s episode but it actually moves the plot along nicely in the build up to the big wedding.

The Captain inviting Lily to move to Italy seems like the kind of thing that an eccentric billionaire would do. Kyle MacLachlan is excellent, getting every ounce of comedy from his ignorance of anyone not using nautical terms, and seriously, does that guy never age? Lily’s decision to turn him down also seems pretty much in character. She’s proven herself to be a flake, either running away from problems or back to what’s familiar on a number of occasions. What seems less believable is Marshall’s reaction.

Marshall has always been about making a difference, that’s why he works as an environmental lawyer. He wants to make things better for his children. It seems strange then that he is happy sitting in a law firm that has all but closed down, coming up with increasingly elaborate ways of wasting time. Sure, the fun in him telling Lily the truth with word plays that sound like lawyer stuff are clever and funny (working on a big case, while drinking beer – BOOM!) but would Marshall really be happy doing that? And why would he keep it a secret? It’s almost as if it’s just a convenient thing so he’s able to join Lily in Italy.

When he finally convinces her to go using the one line of Italian he knows – “Come on bro! Don’t Bogart all the funions” – it’s actually all rather sweet. It’s a big move for the characters and surely a sign that the end is near. But given there’s another season coming, don’t expect them to be away for long, otherwise the format will have to change radically, or perhaps we’ll pickup when they get back.

The Ted and Barney B plot is pretty standard. They are two guys eyeing up a girl in the bar, but things have clearly changed, even if she does have a body that’s the equivalent of Mission Impossible: Ghost Protocol.  It has been noted that Barney hasn’t been acting like an engaged man. While he has been faithful to Robin, he’s certainly been looking and trying to live the single life through Ted. Some cynical viewers might think that was just so the writers could keep having crazy Barney plots to entertain the masses, but now it seems it’s a plot point. See, you totally can have your Barney cake and eat it.

There are some nice lines in this sequence (redonculous must be coming back into usage) and the fact that her body glows like the Ark from Indiana Jones in a great site gag, and so is the fact that Barney wants his face to melt but there are darker forces at work, just emphasising the changing dynamics of the group.

Ted’s warning to Barney that Robin might not be as cool as she seems about the way Barney is acting comes from a good place, but Barney’s assertion that he knows her better than him and that she’s marrying him sounds pretty much like a threat.

This has all been foreshadowed of course. Victoria has warned Ted that everything wasn’t okay between the three of them and narrator Ted confirmed this. At some point it’s all going to explode.

Robin’s actions at the end of the episode, seducing Barney using a giant coat, seem to indicate that he is right but he’s hurt her before. The first time they broke up and he seemed to be back to normal, it pretty much destroyed Robin, so can she really handle him still longing for other women? This will probably come to a head with the return of Quinn in one of the closing episodes.

The wedding is now just three weeks away in TV land time and surely it can’t all end well for this love triangle. We’ve seen that all three of them make it to the church. We’ve also had a glimpse of the reception where Ted is happily watching his future wife play in the band but something has to go down. Marshall and Lily haven’t settled the bet that Ted will end up with Robin yet. When they do then we’ll have closure. Something is going to go down, that leaves Ted sitting alone at Farhampton Station.

WILD SPECULATION: If Marshall and Lily are heading to Italy, does that mean there might be a time jump next season? Maybe the season ends with them leaving after the wedding and picks up with their return to New York, and the show can fill in the blanks in the meantime. It would seem that Barney and Robin’s wedding is going to break up in the gang in some way, so why not have everyone drift apart.

TV Review: How I Met Your Mother Season 8 Episode 17

Will Lily’s dreams all come true in this week’s How I Met Your Mother?

How I Met Your Mother’s has a weak second episode and points out that men and women sometimes want different things from relationship.