TV REVIEW: HOW I MET YOUR MOTHER SEASON 8 EPISODE 20 “THE TIME TRAVELERS” 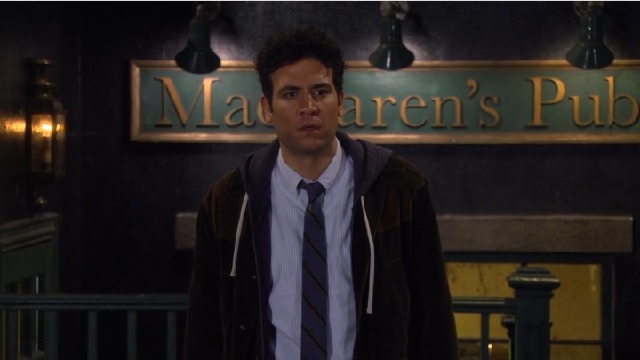 RECAP: Marshall and Robin argue at the bar after the cocktail he invented is named after her. Meanwhile Ted debates about whether to go and see Robots vs Wrestlers: Legends with Barney when visions of his future self and Barney from 20 years forward try and convince him that he needs to go so he can have a great story to tell.

REVIEW: We are back! It’s a mythology episode and somewhere in the middle of the series those perhaps got tedious, but with Ted so close to meeting his future wife, it seems appropriate to remind the audience what the show is really all about.

Ted’s relationship with Jeanette was supposed to help him realise that his lifestyle was partly the reason he had yet to settle down. In the previous episode this had been neglected but here Ted is front and centre even if it isn’t obvious at first.

This episode is pretty innovative as well. Simply using the bar set and the regular cast, it shows when the writing is on top form, that’s all you need. It also uses Ted’s completely unreliable narration to great effect. All that happens during this episode really is that Ted sits alone in the bar, realising that he’s lonely. This is his lowest point, the darkness before the dawn. It would have been nice if the recent plots made it more apparent this is where it was heading, but even as a standalone it really works.

That’s not to say that this episode isn’t funny. It’s extremely silly but it serves its purpose. Bringing Ted’s imagined version of Barney and himself from 20 years in the future is a nod towards the format of the show, and in some ways these are the writers. Asking the question “will doing this thing make a good story in 20 years” is a bit like asking if it will make a good episode.

Ultimately it’s a pretty good explanation of all the antics of Ted over the years. No they wouldn’t necessarily put him on the road to finding his wife, but they would make a damn good episode. Now it seems they are making their mission statement clear: we are all about how he met their mother. Excellent

And there is a delightful callback too. Jayma Mays appears at the bar as the coat check girl Ted remembered from a club 7 years ago. And she really was the coat check girl in the fifth episode “Okay Awesome”. It’s that kind of touch that really makes this show special. Very few shows would care enough to actually bring back a forgotten character. Of course it helps that Mays has become a lot more famous but it was a nice touch.

In that season one episode Ted said, “The problem is you can’t do any of that couple stuff unless you have someone to do it with and the only way I’m going to find that someone is by going out and doing stupid single stuff with Barney.” That’s where the show has been since then. Ted has now done all the stupid stuff. That episode was dealing with a wedge coming between the gang with Marshall and Lily settling down and the rest of the gang enjoying single life. Now Ted is the only single member of the gang.

The nature of sitcoms means that the characters are more or less trapped in the same circumstances with the same group of people for the duration of the show. What this episode makes clear is that Ted’s crazy stories are at an end. Everyone has moved on and he’s just alone fantasising about the past in a bar.

Within 45 days and the next four episodes Ted is going to meet his destiny. The story will be told and it’s great it’s being acknowledged this way. Hopefully next season will be a great pay off to all the groundwork and more in keeping with the tone of this episode than the rest of the season.

The final scene with Ted deciding to go alone to Robots vs Wrestlers in genuinely affecting and his imagined plee to his future wife show just how much this relationship really means to Ted and how lost he is without her. The best sitcoms should be able to make you cry as well as laugh, and in this episode How I Met Your Mother demonstrated that it is still capable of both.