TV REVIEW: HOW I MET YOUR MOTHER SEASON 8 EPISODE 19 ‘THE FORTRESS” 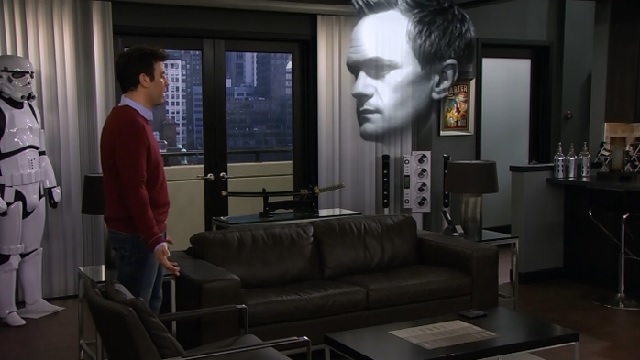 RECAP: Lily is working most of the time meaning Marshall feels like a single parent, this prompts Ted to tempt him into “cheating” by watching English class drama Woodworthy Manor with him. Robin suggests that she and Barney should move out of his Bachelor pad but Barney doesn’t want to give up his fake view window, bed on tracks, floating Jor El head or other creepy devices.

REVIEW: Do you ever feel like you are treading over old ground? There doesn’t seem to be a single original idea in this episode. That might be forgivable if the show was returning to themes that had been explored much earlier in the series but this episode covers pretty much the same things as the last couple. How I Met Your Mother has been weak before, but this genuinely feels lazy.

Lily out working every hour seems reasonably plausible given she has her dream job and is answering to a billionaire but it’s a relationship so there’s give and take. Hey Marshall! Remember corporate Marshall? He might be extinct now but I bet he worked pretty long hours. Ted and Marshall acting like a gay couple is fine as a gag but didn’t Ted and Barney do this joke already when they decided to adopt a baby last year?

The Downton Abbey running joke where Ted Lily and Marshall are all watching Woodworthy Manor is fine. The digs at the compelling lack of action are valid but just like the ‘Weekend At Barney’s’ playbook gags, it feels like a conversation transferred from the writer’s room . Surely the characters should be driving the stories rather than standard bar chats the writers might be having.

Hey audience, remember that massive revelation Ted had last week about really wanting to settle down? Well here he’s making out with a random girl in a closet. If there’s one thing you can’t usually criticise about this show, it’s the continuity but here they clearly just don’t care. Ted has decided to settle down but still has one night stands based on a lie? We’re still supposed to be invested in Ted’s journey right?

You might think maybe they’ve aired these episodes out of order but then Ted wouldn’t be single. It’s a case of the writers wanting to have their Barney cake and eat it, forgetting who the protagonist of the show really is. Barney commends him on all he has learned having seduced a woman by pretending to be gay and English. So Ted has learned to be Barney? I thought he really wanted to settle down and have children. My bad.

You see, they still want the whackey Barney that has entertained for the last seven seasons and fear that now he’s engaged to Robin that they might not have anything to do with him. The thing is, Barney has evolved and grown throughout the run of the show and become more than the ridiculous womaniser which was mostly a front anyway.

The whole apartment storyline is the same as the playbook. Robin wants Barney to give something up but he can’t let go of his old life and then it all gets tied in a bow again. The giving up of the playbook wasn’t just giving up  a possession; it was symbolic.  If they do a story about Barney giving up something else then everyone might as well ignore the final season and pretend it got cancelled last year.  By necessity, this engagement has been rushed but the characters need to be in a place where a wedding in a two months seems plausible. Barney is marrying Robin, and showing him longing after the past cheapens their relationship and makes her look pathetic.

On that note, Robin has nothing to do again except be the apparently nagging but actually highly reasonable girlfriend. What ruins it even more is the whole tease of an adoption based conversation at the start of the episode. God forbid they actually discuss something which might have emotional resonance.  We’ve seen before that Barney wants kids and Robin doesn’t so maybe that should be addressed. Nah, let’s just have Barney be “Barney”.

CONTINUITY:  Ted fills in for Lily on Marvin’s lullaby from ‘The Final Page’. The Captain makes an appearance as Lily’s Boss. Ted is single again and has learned NOTHING.

The time has come for Worf to get a back story