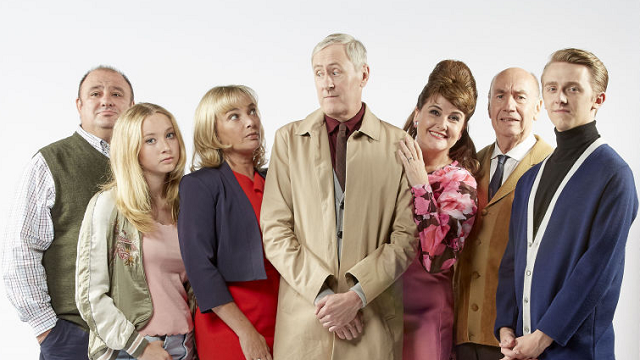 Goodnight Sweetheart was something of an oddity among sitcoms, in that it had a proper ending. Genial time travelling bigamist Gary Sparrow finally found himself trapped in the 1940s, leaving behind all the comforts of 1999 and forced to accept life in the pub with his wife Phoebe, leaving behind his lies of being a spy.

This revival picks up 17 years later with Gary settled with his family but bored and missing some of the variety of food available in the 21st century. But what do you know, he’s actually arrived at the date of his birth, so of course he decides to go to the hospital to witness the event. This leads to him meeting his father in one of the episode’s more interesting moments, where they clearly riff on Marty and George meeting in Back to the Future. There’s clearly lots of potential there, but it’s all skipped over in order to get Gary back to the present of 2016 within the first 5 minutes

There’s some culture shock to be played here and clearly there have been a number of changes to the world since 1999. For example, gays were only invented in 2002 and so Gary is stunned to see TWO MEN walking down the street. Also, ripped jeans weren’t in existence back then. And would you believe it? Everyone has a mobile phone, despite this technology being fairly prevalent back then, even if devices didn’t do all the cool things they do now. This is clearly a rich area that could be mined but this felt a little slack and obvious…and inaccurate.

Perhaps part of the problem is that everything feels like the world hasn’t really changed since that last episode. The bar set is the same, and other than an awful Merseybeat version of the theme tune, and despite mentions of the Cold War and The Beatles, they never really nail the tone of the 1960s.

This is the same cast that the show ended with and you’d find few who would say this was the best permutation. The show suffered with the departure of original players Dervla Kirwan and Michelle Holmes as Gary’s wives Phoebe and Yvonne halfway through the original run. That’s not to say that Elizabeth Carling and Emma Amos aren’t good, they just don’t live up to the folk memory and here neither has much to do here.

Carling in particular is under serviced in this script, never leaving the main bar set and just reacting to Gary either arriving or going away. Amos at least gets to respond to her long departed husband’s disappearance and reveal that Gary has a daughter and this revelation and the relationship between the estranged father and daughter shows promise. More satisfying is the return of Victor McGuire as Ron and there’s a sincerity to the bond between the two old friends reunited.

This is clearly not a one off revival but an attempt at a new pilot and with the next generation of Gary’s family now in play, there could be some potential to string it out a little. Goodnight Sweetheart was never a great sitcom. It was remarkably gentle and perhaps even twee, despite the high concept and potentially unlikable main character. However, Lyndhurst is always a joy to watch and it’s a perfectly pleasant way to spend 30 minutes.

Should this result in a series, no doubt it will amble  along fairly nicely but what it might prove to commissioners is that you can do high concept sitcoms. Mainstream audiences can deal with time travel and evil doubles and anything else you throw at them, as long as it’s framed in the right way. Audience sitcoms have so much potential that is not being fulfilled at present. This show isn’t the answer but a revival could prove that there’s more interesting ground to be covered.