TV REVIEW: DOCTOR WHO ‘THE TIME OF THE DOCTOR’ 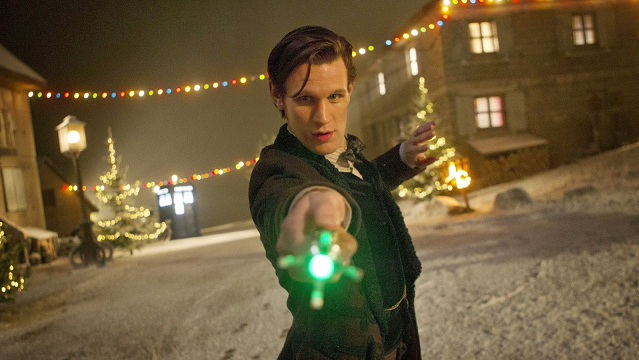 SYNOPSIS: The 11th Doctor spends centuries protecting a planet from his enemies in order to prevent the beginning of a new Time War.

REVIEW: This Doctor Who Christmas special is a bit like a Christmas tree. The main part of it is a magnificent and beautiful structure grown over a number of years, unfortunately much of that beauty is overwhelmed by shiny and extraneous baubles and tinsel.

So let’s get the baubles out of the way first. This episode, being the Christmas special, was broadcast on Christmas day but the Christmas elements feel somewhat shoehorned in. It’s good that Clara is getting more depth and backstory but in such a busy episode, it’s not the best time. Every alien race from the era of the Eleventh is here and mostly that works but one set piece with the Weeping Angels that feels rather superfluous. There’s also the Red Dwarf-esque idea of the truth field where no lies can be told which is fun but doesn’t really have any purpose.

Those things aside, it’s a really pretty tree and one that showrunner Steven Moffat has spent years growing, carefully watering and pruning and occasionally wrapping it around sticks to make it more complicated than it needs to be. If you want some pay off to the dangling threads, then there are plenty here. We discover the origins of The Silence, who blew up the Tardis and get more information all about the crack in the wall. The explanations will probably infuriate many but that’s the best you’re going to get so probably best to let it go.

The Doctor’s new “companion” Handles (a Cyberman’s head) is great fun and could have been a decent long term exposition machine if handled correctly. Head of the Silence, Tasha Lem played by Orla Brady is a charismatic psychopath with more than a hint of River Song about her.  Jenna Coleman once again shows her value as Clara and hopefully under a new Doctor she’ll have a chance to shine beyond being The Impossible Girl.

So the plot  all revolves around Trenzalore; the planet where it has been foretold that the Doctor will die. His grave was seen in the series 7 finale and now we’re going back to the start as he finds a crack in the universe delivering a message from Gallifrey asking for the Name of the Doctor. Rather than telling them it’s out on the season 7 DVD, the Doctor remains on Trenzalore protecting the people, knowing that releasing the Time Lords now will mean the Time War begins anew.

It’s an interesting concept to see decades of the Doctors life passing in a single episode but that needs to be the focus of the episode, rather than just part. The idea was done more justice in 2010’s ‘A Christmas Carol. We never really get to know the people of Trenzalore but the drawings on the Doctor’s wall given to him by the children he protects give a good enough impression of passing time. Ageing makeup is never easy but they do a good job making this ever-young Doctor appear to be the the old man he really is.

The episode builds on the mythology set up in 50th anniversary episode The Day of the Doctor, and although the Gallifrey plot points may not make a whole heap of sense when you think about it too much, it provides a properly set-up solution to the problem of the regeneration limitation.

You might also be left wondering just how the Time Lords were getting their asses kicked in the Time War when twice now the Doctor has managed to destroy fleets of Dalek ships on his own, although losing his life in the process on both occasions. It doesn’t really matter though because it leads to one of the greatest scenes in the history of Doctor Who.

Steven Moffat is often accused of overcomplicating things but he can write a goodbye like nobody else. the paintings of the children of Trenzalore reflect those of Amelia Pond and the echo of her is the perfect touch. As the Doctor says goodbye to Clara, Matt Smith reminds everyone just what we’ll be missing. The words of the Doctor reflect the feelings of the departing actor before his beautiful grin makes way for the scary eyes of a new man. Goodnight raggedy man. It’s been a pleasure knowing you.

The Doctor: We all change. When you think about it, we’re all different people all through our lives and that’s okay, that’s good. You’ve got to keep moving so long as you remember all the people that you used to be. I will not forget one line of this, not one day I swear. I will always remember when the Doctor was me.

Here’s the latest trailer for Doctor Who series 10, Peter Capaldi’s last turn as the Time Lord and Steven Moffat’s last as head writer.

Time travel is great isn’t it? You go back and have some fun and then return to your present without any lasting consequences. Well that might be true if you’re in some poorly written fan