TV REVIEW: DOCTOR WHO SERIES 9 EPISODE 3 ‘UNDER THE LAKE’ 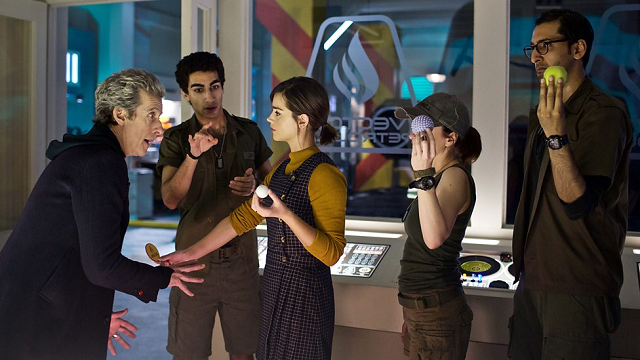 SYNOPSIS: The Doctor and Clara arrive on an underwater base in the 22nd Century. They find surviving crew haunted by ghosts with murderous intent with the apparitions apparently caused by mysterious alien space ship found at the bottom of the lake.

REVIEW: The base under siege narrative is a genre classic and a staple of Doctor Who old and new. This episode feels oddly like a Russell T Davies era mid-season two parter in style and that isn’t necessarily a good thing. The stakes don’t feel that high and the mystery is perhaps less than intriguing. That said, it’s a solid enough foundation and sets an eerie enough tone that it might all look much better after part two.

The Tardis crew find themselves on is an exploratory vessel, owned by Vector Petroleum searching for sources of fuel beneath a lake in Scotland. There it finds an apparently empty alien vessel which features strange writing on the wall. With that vessel comes a ghost, an alien dressed as an undertaker who promptly kills the commanding officer, Moran (Colin MacFarlane). He is then resurrected as a ghost and starts trying to bump off the rest of the crew who are able to hide in the base’s Faraday Cage (all bases have one).

It’s Doctor Who by numbers – sometimes knowingly so – with running down corridors is made an essential part of the episode. It seems like it’s just like another take on The Thing with people trapped on a base and then slowly being taken out by a monster in order of how irritating they are. Writer Toby Whithouse recognises the familiarity and has the characters even point it out allowing the episode to go in a different direction.

It’s not a hugely different setup from series 7’s ‘Cold War’, set on a trapped submarine. Familiarity can be useful – it shows how different writers handle the same scenario and if they’re very clever they might subvert the tropes. To a degree that’s managed here but just because a cliche is mentioned, doesn’t really make it any cleverer when its utilised.

That’s not to say any of it is bad. You genuinely don’t want to see any of the supporting cast getting killed off, except for the obnoxious, clearly-killed-early manager type Pritchard (Steven Robertson) who might as well be walking around twirling his moustache. The CGI used to enhance the actor’s ghostly appearance is excellent and the synth-inspired music creates a foreboding atmosphere.

The character moments work very well too with the Doctor and Clara sharing a beautifully written scene in the Tardis about his duty of care. There’s also the return of the theme that travelling with the Doctor changes people, something that’s been dealt with frequently in Nu Who but perhaps especially applies to Clara, who is utterly fearless in every situation but perhaps starting to lack any kind of human compassion. Again, a scene in which she advises the Doctor how to deal with human loss with flashcards is perfectly written for this more alien Doctor.

The cliffhanger is great on its own terms and suggests something more to come in episode two. Splitting up the Doctor and Clara in order to create a narrative told across two different timelines is highly intriguing. That said, the Doctor appearing as a ghost, while it works in isolation, is never going to be satisfying in the long run. How many times can his death really be foretold? It’s almost as if Steven Moffat has advised every writer to create a cliffhanger that’s impossible to resolve. No matter what happens next week, the resolution will feel cheap because the Doctor isn’t dead, which then makes this cliffhanger nothing more than a cheap trick, even if it’s a disturbing vision.

The Doctor and Clara return for this series 9 premiere