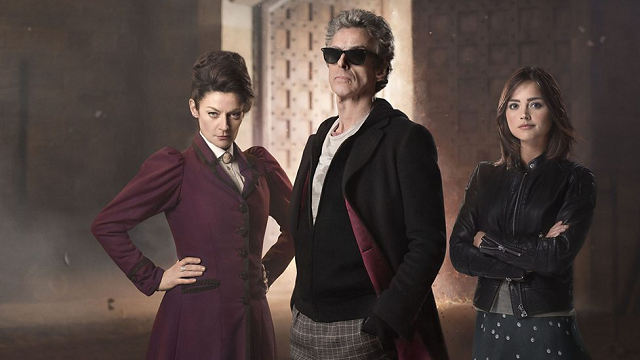 SYNOPSIS: The Doctor is nowhere to be found while an old enemy is searching for him in all his old haunts. Meanwhile on Earth Clara must deal help UNIT deal with the return of Missy.

REVIEW: 50th anniversary special, ‘The Day of the Doctor’ proved that when the occasional called for it, Doctor Who could be hugely ambitious event television – the like of which is rarely seen on UK television. It seems Steven Moffat has decided that he really doesn’t need the big occasion, and has gone all out in this season opener, which really feels far more like the opening part of a finale.

It’s not just that the episode is grand in scale – Moffat pulled a similar trick with the epic season 6 opening two parter. It’s more that this feels so embedded in the mythology of Doctor Who – all of it – that this becomes  a deeply important episode within the history show as a whole. While in the past, there was a concerted effort to ease viewers into this less-than-mainstream world, here it feels like a degree in the history of Doctor Who might be advantageous.

That shouldn’t really detract from the sheer pace and bravado with which this episode rattles along. It’s like riding a roller coaster. While you can’t properly appreciate all of the scenery as you go by, you know that it’s a thrilling ride.

10 years into the run of the programme, the current showrunner has often commented that the current show is really just the same as the old show, and that has never felt truer than in these episodes. There are references and even plot points aplenty that tie into every single Dalek episode in the show’s run starting with 1963’s ‘The Daleks’ right up to 2008’s ‘Journey’s End’ with a very distinct detour via Tom Baker classic ‘Genesis of the Daleks’. With both Davros and The Master, UNIT and even some checked trousers on display, it’s immediately clear this episode is designed to be rich in the lore of the show. You could probably set this story during any one of the Doctor’s incarnations, but it works rather well with Peter Capaldi’s serious incarnation, although here he’s on delightfully mad form.

The cast all gel well together, with Michelle Gomez acting delightfully insane, and Kate Stewart’s UNIT now feeling comfortable part of the furniture. Genre veteran Jaye Griffiths is on fine form as newcomer Jac, probably getting most of what would have been Osgood’s lines had she not been quite so dead. New bad guy Colony Sarff is a delightful creation with a perfect combination of special effects and performance to creep out children everywhere, The weak link is Clara. That’s not to say that Jenna Coleman is bad; she is charismatic as always. It’s just that this companion is smart, funny, courageous and unphased by anything the universe throws at her. She should be the identification figure, but really she’s a superhero. Maybe her apparent invulnerability will be her downfall, but for now she’s a little too perfect.

The direction of Hettie Macdonald is superb, making the most of the diverse range of planets, time zones and destinations on display with a whistle stop tour around the iconic destinations of the Nu Who universe including the Maldovarium, Shadow Proclamation and Karn. It really feels like a huge universe and this episode is full of huge moments, all perfectly framed and lit to make each instant feel iconic.

To be somewhat harsh, there is the possibility that many of the elements just feel a little familiar. It wasn’t so long ago that the audience was told that the Doctor’s death was imminent, and we’ve seen the Tardis exploding back during series 5. And just one episode ago, it appeared Missy died having been zapped by a laser beam. It’s all packaged to feel reasonably fresh but how satisfying it ultimately feels will come down to how successful these threads are developed during the next part and the rest of the series.

As it stands, this is a great statement of intent from Doctor Who, and it appears the Steven Moffat isn’t that bothered about putting all the toys back in the box after he’s done playing with them.

How I Met Your Mother S08E01: Farhampton

So Ted drove off with everyone’s favourite season one love interest Victoria, after she decided to abandon her wedding to Klaus; Barney got engaged to Quinn; Marshall and Lily have their baby Marvin home; and the writers still can’t work out what to do with Robin.

Last Christmas, I gave you my heart, but the very next day, you gave me a dream crab