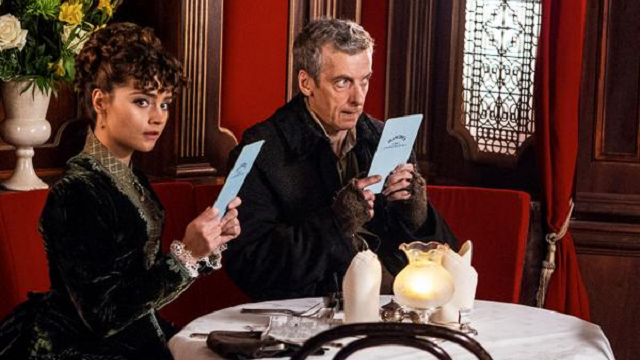 It’s unfair to compare introductory episodes for the new Doctor. Circumstances and times change meaning that any comparison would be worthless and anyway it’s just lazy reviewing. Well lazy reviewing is our modus operandi so how does ‘Deep Breath’ compare to the ‘Eleventh Hour, Matt Smith’s first outing as the Time Lord’?  There really is no comparison. ‘The Eleventh Hour’ was a tour de force; an exceptional piece of writing that celebrated the best of Doctor Who’s past while setting it up a whole new era. In contast ‘Deep Breath’ feels a little slight. It would be harsh to call it a mess but it’s a strange mesh of clever musing on the nature of the self and some some overly familiar plot points interspersed with blockbuster set-pieces.

Moffat has commented in the past that launching the Eleventh Doctor proved to be a massive challenge as there was nothing familiar left. There was no companion to bring continuity; there was a brand new Doctor; and a brand new production team. Even the way the show was shot changed, although this was hardly the first time in Who’s history this had happened. So it makes sense in this outing to bring in the familiar faces of the Victorian Crime-fighting Paternoster Gang comprised of Madame Vastra, Jenny and Strax. There’s just something about their heavy presence in this episode that doesn’t quite fit.

It’s as if the setting was chosen first without really considering the wider themes. They are brilliant characters but verge towards comic relief when this episode is dealing with the dark and disturbing. The thrust is all about Clara no longer recognising the Doctor and perhaps the Doctor not really recognising himself. It’s about transformation and if you keep on changing whether you’re really the same person before the events that acted as the catalyst for the shift.

To that end, the clockwork droids constantly updating themselves with spare human parts work as a great counterpoint to the Doctor’s traumas; and Capaldi is at his best when involved in a heated discussion with Peter Ferdinando’s wonderfully creepy half-faced man. It’s the rest of the episode that just doesn’t really hang together.

A show about Clara questioning who the Doctor is now really needs more time with the two characters together rather than prolonged discussions between her and Vastra. The Doctor’s post traumatic stress is a convention of regeneration but having him out of the picture for large swathes of the episode doesn’t serve the episode well. In his opening episode, the Doctor should be front and centre. Viewers are reasonably fickle and need something to get behind and it doesn’t really feel like there’s enough Doctor here to justify the name of the show.

The Eleventh Doctor got to do all kinds of Doctory things while he was finding himself. He got to play the hero, save the town and solve the puzzle; and that was all before he even donned the bow tie. It worked for the story at the time. David Tennant spent much of his his launch episode asleep as well but when he stepped into the fore he was the Doctor, and defined his character on the scene of the Sycorax ship. There’s nothing like that in ‘Deep Breath’. There isn’t even a scene where we get to see this new Doctor choosing his costume – surely a rights of passage. He just disappears, for how long we’ll never know, and apparently comes back fully formed.

However, there is lots of interesting character development for Clara. Given the nature of her character, she hasn’t really had much time to grow and here it seems she’s being given some added depth even if some of it feels slightly shoehorned to fit the new format. The two leads work well together when given the chance and hopefully we’ll see far more of this over time.

There are big ideas in this episodes and there are elements being set up for the future, but a simpler approach might have been more effective. The ideas are right and the direction is superb and unsettling but the machinations of the plot don’t serve the characters well. Perhaps even just having the Doctor and Clara talking for 80 minutes on the Tardis would have explored the new character dynamic better.  Moffat writes beautifully and there are brilliant lines superbly delivered by Capaldi and Coleman but these character moments need fewer frills surrounding them.

Doctor Who viewers are accustomed to change and there’s so much here that just feels like reassurance. From the familiar monsters borrowed from Moffat’s own ‘Girl in the Fireplace’, to the presence of the Paternoster Gang and even the repetition of classic lines from Who’s past. It feels like the production team are afraid that if they’re going to unsettle the Doctor’s character, that the viewers have to have the comfort blanket of Doctor Who from days gone by.

The biggest sin is the reappearance of the Eleventh Doctor, calling Clara from Trenzalore to tell her – and the viewers – that the new guy is still the Doctor and we need to stick with him, even if we’re not quite sure about him et. This isn’t necessary, and it just invites comparison to the past. I knew there was a reason this review is so lazy. Before Doctor Who moves forward, it has to let go of the past. There’s a whole universe to explore.