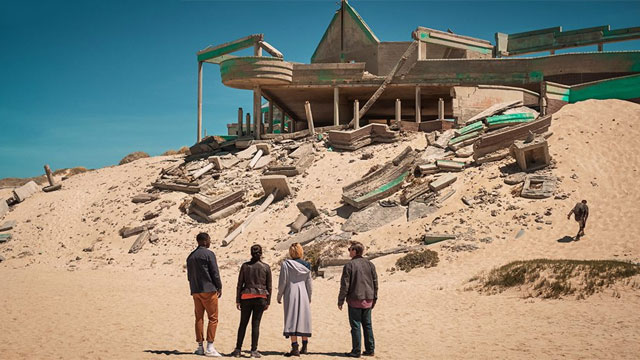 Still reeling from their first encounter, can the Doctor and her new friends stay alive long enough in a hostile alien environment to solve the mystery of Desolation? And just who are Angstrom and Epzo?

This is one of the best looking episodes of Doctor Who ever made. The location work is stunning. It’s such a stark contrast from last week’s Earth-set opener that you really believe that this is an alien world. There are vast sweeping shots across the landscape. The landed spaceships have seldom felt more real. It’s all beautifully shot to make the most of an unusual location.

Beyond the look, this episode (slight as it is) is a bit of a mess. It almost seems to take the visuals for granted and we’re presented with a script that tells and doesn’t show throughout the entire run of the episode. With lots of big exposition dumps, the whole thing plays out like a lazily written computer game. Too many things just happen to move the episode along, right from the outset.

There’s a cliffhanger to resolve. The Doctor and her new friends are floating in space. Oh, that’s resolved now. No clever plan. No action from anyone. Spaceships just picked them up. That was lucky. And the crew are split up so we can introduce the guest characters – Angstrom and Epzo or grumpy man and Irish lady. But the two crews don’t really react differently in these similar situations. We don’t really learn much about them, other than the fact that being in space is a bit disorienting and Graham wants to help. That’s fine. It gets the episode going, but really, the cliffhanger in that form wasn’t really necessary. Just start with them stranded on a planet. Isn’t that bad enough?

Anyway, once they all make it down and are reunited (isn’t it lucky planets are so small that an out of control spaceship can almost crash into the only three people on the surface) and they go to a cut scene where a wizard tells them about a quest they have to go on to find the treasure. Wait, that’s not right. They’ve been caught up in a race and he’s a vindictive billionaire  and the two racers thought the people floating in space were worth bonus points. This is explained at length.

Was there no visual way to show two people and their spaceships were in a race? There weren’t any shots of them in in space, showing where they were relative to each other. There are none of the motifs that we associate with racing. No markers, no finish line, no nothing. The plot as explained is that there were many to start with and they’re now down to the last two. Would it have hurt to show a ship or two maybe crashing out as they try to reach a goal? Then you’d get more a sense of both the race and the danger involved.

We’re told this information by the billionaire man played by Art Malik who is in no way phoning it in as the underwritten character who shoots all his scenes in a chair in the studio. The two surviving racers and the TARDIS crew are given a map, and told the obstacles they have to overcome to reach the goal. So the winner of the race gets money and freedom for the society from some terrible society. Also, it turns out the finish line is also the TARDIS, known on this planet as the Ghost Monument of the title because it appears and disappears every 1000 cycles or something. What a lovely round number.

So, the whole thing is sort of like The Hunger Games but it’s a race. But in those films, the games were used as a tool to suppress the society and people fought to the death to win. Here, there are apparently no observers, so is this just the sick game of a rich man? It’s never really explained. Also, given the stakes are so high, everyone just goes along as a group, working together. Would it not have perhaps made more sense to keep the two groups apart, take them on different paths, see their different approaches to solving problems as they try to win? Different dangers, more tension. What’s the point in a competition where no one looks like they are competing? There are some barbs between the two guest stars but it’s never brutal; it’s familiar frenemy stuff.

There’s a boat. They use a boat. The lake eats flesh. The Doctor says so. No flesh is eaten. There’s no visual representation of the danger. They get in a boat, they have to fix the boat and away they go. This scene is used to remind us that Graham and Ryan have a relationship and they both state their character traits out loud.

Level 2 – don’t get killed by the robots

Robots have guns but they can’t shoot straight. Luckily there are things on the floor you can use. Choose a gun or a button. Ryan opts for the gun. You have chosen poorly. Lose a life. The Doctor presses a button and creates a EMP and knocks out the robots. Next level. Does she make the thing? Is something cleverer happening here? Doesn’t seem like it. But the Doctor gets to make the speech about not liking guns. So that’s good.

These evil bandages are foreshadowed throughout but given they’re static, it doesn’t create much threat. Luckily there’s fields of acetylene which can set them on fire. Your secondary character has a self-lighting cigar which was clumsily set up in the previous scene. Would you like to use it now? Yes, good. Bang. Problem solved.

There’s another thread in this section about the planet’s horrible things being created by scientists under duress. The Doctor reads this information out loud. But the writing is on the floor so it seems more dramatic than a bit of paper.  There’s also a little hint of a plot arc. At least that’s intriguing.

The TARDIS isn’t there. The Doctor seems defeated, but her new companions gee her up. But you know how they already mentioned it only appeared every so often? Such tension for the audience waiting for the thing that has to happen. Without much wait, it appears and they all get to see the hideous new console room. Happy endings.

This might be a harsh review but it’s because the potential is there and it’s just not very well executed. Jodie is great but the whole thing just feels incredibly clunky and a bit of a mess. Given the epic visuals, you really want a script to match. The companions begin to be a concern though. There are clearly character moments scripted but none of them really seems to react in a distinct way. They’re basically a really boring chorus. There’s no sense of awe. When Graham mentions they’re on an alien planet, he might as well say it’s Benidorm.

Still, it’s early days. We’ve got the new Doctor, we’ve got the new TARDIS. We’ve done an alien world. Next week, time travel. I’m sure they won’t have chosen a controversial era or subject….oh. Good luck with that.

Instant Reaction Review: Doctor Who – The Rings of Akhaten