TV REVIEW: DOCTOR WHO SERIES 11 EPISODE 1 ‘THE WOMAN WHO FELL TO EARTH’ 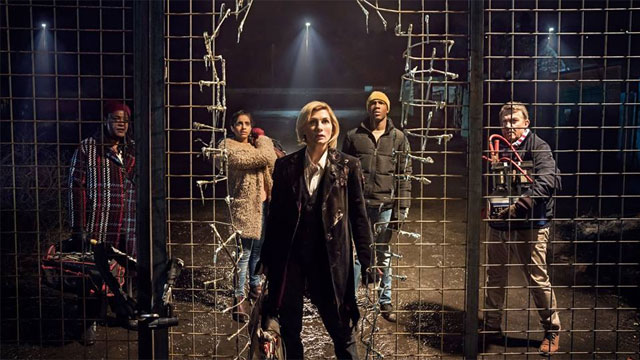 In a South Yorkshire city, Ryan Sinclair, Yasmin Khan and Graham O’Brien are about to have their lives changed forever, as a mysterious woman, unable to remember her own name, falls from the night sky. Can they believe a word she says? And can she help solve the strange events taking place across the city?

When writer Russell T Davies brought back Doctor Who in 2005 he used the language of  the soap opera to bring the weirdness of a science fantasy show to the masses. The characters, who could basically have been in EastEnders were suddenly plunged into a stranger world. Chris Chibnall has pulled a similar trick but this time, it isn’t the soap opera he’s mimicking – it’s a prime time British procedural drama. Not one of the really classy shows like Happy Valley though; think one level up from Casualty. Law & Order UK maybe. Or something starring Trevor Eve. Anyway, following a period when the show demanded you keep up with a myriad of plot intricacies and continuity, for the first time in years, Doctor Who feels accessible again. And that’s a good thing.

This episode has no opening titles sequence. That’s a big deal. Opening titles are such an important part of the language of television, especially in shows like Doctor Who which conventionally have a teaser. Even more so when everything is new and people want to see exactly how the icons of the show have been interpreted. But this episode cares not for icons. This is a new beginning. And that creates a beautiful tension.  You’re waiting for that moment when the Doctor appears and everything is okay and that old familiar (but newly arranged) theme tune kicks in. You’re waiting to discover the show’s identity, to see what you can read into it. Five minutes pass. Then 10. And the tension is unresolved. It’s giving nothing away, because that new identity has not been determined yet. The Doctor is still working out who to be, who’ll be her friends and what she’s going to do next. It’s a blank slate. When the Doctor doesn’t know who they are, then the show is not yet defined.

Which is weird because it’s actually on remarkably confident form. Despite having loads of work to do, introducing the new Doctor and new companions, a brand new monster, a new location and a different visual style, it feels a lot like the show that we already know. Strip it back to the basics, and she’s the Doctor, helping people and battling aliens, inspiring others to believe in the impossible.

And Jodie Whittaker absolutely is the Doctor. There’s no question. A smart hero with authority who’s just the right side of quirky. And funny too. The gag about the alien’s name may not be the most original but the timing and delivery are impeccable. Building the new sonic? Brilliant. Shows exactly what they’re all about – hands on, pragmatic, gets things done. Basically, Northern. Even though the character says they aren’t quite defined, or even unable to remember they call themselves the Doctor, she’s pretty much fully formed from the second she crashes through the roof of the train and saves the day.

In that way, there are echoes of Doctors past. Matt Smith’s Doctor was thrown right into an adventure without having finished baking in his debut and this new Doctor collapses for a while in the middle of the the story to properly regenerate much like David Tennant’s did during The Christmas Invasion. And this Doctor certainly shares some of the cool, youthful, mouthy zest of those incarnations. There’s no attempt to subvert expectations or make you doubt their motivations. The Doctor doesn’t question herself or work out what it means to be the Doctor. She simply is.

As for the new additions to the cast, they all seem likeable and there’s plenty of potential in their relationships to create drama as the series unfolds. Three new companions at once is something the show has never done before. If the opening episode is anything to go by, Ryan is the pivot as he holds existing relationships with both the others. Yas is a friend from long ago and Graham is his step-grandfather so there’s enough distance that they don’t really know how each will respond in a crisis but enough of a shared bond that they care. Also, they’re just more grounded than recent companions. You can’t really imagine any of these characters being in the same show as someone as weird as Nardole or as witty as Bill. But does that mean they’re a little boring maybe? Indistinct, even. We’ll start with grounded and see where we end up. The fact that they’re unwilling adventurers in space and time is also something that feels new in the modern incarnation of the show.

And that feeling that the production is doing the familiar a little bit differently pervades this episode. Separating the Doctor from the TARDIS was a masterstroke. It allows the classic elements to be introduced slowly and gently to the newfound Sunday evening audience. There was no walking through the doors and saying ‘it’s bigger on the inside’. There wasn’t even a mention of time travel. But even when you strip that all away, it’s still Doctor Who. This is basically the Casino Royale of Doctor Who episodes.

And presumably it will be over coming weeks rather than just the one that all the classic ingredients will be put in place to see how they fit with the modern world. And that’s fine. Pacing is good.

If you want to be critical (and what’s the point of writing about Doctor Who if you don’t want to pick nits) then the supporting characters have dialogue that’s so on the nose that it probably obscures their vision. The security guard whose only defining characteristic was him saying he was a grandfather before biting the dust exemplifies this. It’s the shortest cut towards empathy. Or you could pick the man who was looking for his sister, who stated at least eight times that he was looking for his sister. It’s a little thing but giving them one secondary trait would help round out the world.

Also, there’s a slight hint of nastiness in the villain. Maybe that’s a good thing. The main antagonist played second fiddle to the new Doctor and new companions but it was basically Predator meets the Ice Warriors. But their ritual of taking the tooth. That was properly nasty. And while that’s fine in small doses, it’s reminds a little of Chibnall’s tenure on Torchwood where nasty was the main course.

Also, while I’ve got you here – no, please don’t run away – what’s with the black bars? You want to make the show look cinematic? Well, you have. You did that with the new lenses, locations, lighting and grading. Don’t put black bars on a TV show. It’s made for TV. TVs are a certain shape and they’re not going to change.

And lastly, the unfortunate event that defines the episode is so signposted and such a bad decision from the character that it’s hard to be emotionally invested, even if the performances surrounding it are all lovely. It’s something that emerges from being in the script rather than naturally from character or events.

Oh well, apart from those few minor quibbles, you can call this a triumph, a clean slate, a fresh start. Welcome to the new world. It’s just like the old one, but different.

Doctor Who: Trailer for 2017 Christmas special Twice Upon a Time

Next Time on Doctor Who: Journey to the Centre of the Tardis