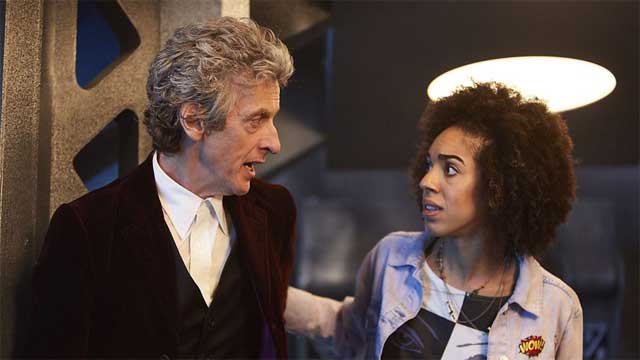 SYNOPSIS
Two worlds collide when the Doctor meets Bill, and a chance encounter with a girl with a star in her eye leads to a terrifying chase across time and space. Bill’s mind is opened to a universe that is bigger and more exciting than she could possibly have imagined. But who is the Doctor, and what is his secret mission on Earth?

REVIEW
Doctor Who took some time and space out of the schedules last year, giving fans an agonising wait. Returning to its traditional slot in the spring time for the first time in over six years with a new companion and a billed as soft reboot of the series that allows new viewers to hop onto the TARDIS with no previous knowledge required.

Let’s get the whole reboot aspect out of the way first. Since the series returned over a decade ago, effectively this is the third proper starting-from-scratch reboot. Russell T Davis’ ‘Rose’ in 2005 which propelled Doctor Who from being a low-budget camp-fest with wonky sets and bubblewrap monsters to a credible sci-fi show fit for the 21st century. A key ingredient to the success of this reboot was a new sense of realness and credibility. This was achieved by putting the viewer in the companion’s shoes and learning about the Doctor’s world through her eyes. Rose Tyler was a companion fit for a new millennium and new era of Who and her arrival jettisoned the gross sexism that her dolly predecessors from the 20th century had been soaked in.

As an episode ‘Rose’ really set out the stall for new Doctor Who with allusions to the past in the form of the Autons but also began to define what the show was about in a clever and contemporary way, keeping viewers hooked for the next few episodes in which they’d travel to the future and to the past showing the storytelling possibilities of the time travel.

The next overhaul would be five years later when Steven Moffat took the reigns as showrunner. New Doctor, new titles, new music, new companion, new TARDIS and ‘The Eleventh Hour’ is arguably the best series opener the show has ever seen.

Whilst being a modern, bang up to date episode it managed to imbibe a feel of classic Who and oozes the charm of the Third Doctor’s first episode, Spearhead from Space. The companion, Amy,  was introduced in a clever timey wimey way and the series’ charming theme of fairy tales was another clever way of explaining the premise of the show in an accessible way.

Both of these episodes work so well because of the subtlety in the plot and actually just making the premise and the rules of the show part and parcel of the plots. This week’s reboot is probably the clumsiest of the three. Moffat who has been the showrunner for the past seven years, is on a permanent ego trip and has a habit of over complicating things – usually in the finales.

Imagining this from a total newby’s perspective, it’s over complicated in a number of ways that deny the usual channels and accessibility. Firstly with the Doctor, who we have come to know as a high-born Galifreyan with an affection for Planet Earth and her people, is suddenly a professor at a university and apparently has been for 50 years and is almost a sci-fi parody of Frank from Willy Russell’s Educating Rita. This contrived nature, which to be fair can’t really be fully judged until the series concludes, lifts the show from its sporadic stream-of-consciousness to something more premeditated and planned which is maybe a change too far from the show which generally copes well and even thrives. Surely, all you need to know to get on board is the Doctor is an alien, he can travel in time and space in his TARDIS which is bigger on the inside.

Another aspect of the episode that really cannot be ignored is detour to meet the Daleks for the sake of it. While the enemies in ‘Rose’ and ‘The Eleventh Hour’ aren’t integral to the show and really could be replaceable with any other threat,  the Daleks should be used more sparingly as a sacred pillar of the show rather than just being shoehorned in because they are cool.

Daleks aside, the main big bad of the episode was a puddle with a whispery voice. As a standalone episode, this wasn’t good enough. ‘Rose’ had the good grace to explain the plastic dummies that came to life were Autons powered by the Nestene Consciousness and ‘The Eleventh Hour’ held the Atraxi to account at the end of the show with a speech which imprinted Matt Smith’s Doctor onto the timeline with a beautiful who’s who of Who.

My hope is that this puddle will be properly explained (in a sturdier way than Amy’s crack on the wall). A gut feeling from the eerie hissing tones of the puddle could be linked to the Ice Warriors who we know will be turning up later in Episode 9 – as the invaded rather than the invaders. Whilst Heather would have been a nice girlfriend for Bill I’d worry about seeing her again as it feels we’ve already seen this kind of story in Series 8 with the Danny Pink/Clara arc.

That aside, what the plot fails to deliver, the characterisation of our protagonists is at an all time high. After what seems like forever travelling with “the impossible girl” Clara whose arrogance and poor imitation of the Doctor made her unlikeable and unrelatable,  lessons seem to have been learnt and Bill couldn’t be more different.

Although she works in the university cafeteria, she isn’t stupid – further echoing the Educating Rita connection. Her inquisitiveness and spontaneity give her character a special dimension. There’s a  refreshing  quality to her where she asks the questions that most people don’t.  Bill clearly sees the world in a different way to the rest of us – even the Doctor notes that: “Most people, when they don’t understand something, frown, but you …smile.” The kind of relationship that she forges with the Doctor also feels new, because it hasn’t really been done properly in the past 30 years. The portrait of the Doctor’s granddaughter on the desk, Susan subtly alludes to this new dynamic.

Matt Lucas’ Nardole (who I’ll admit I found really annoying in ‘The Husbands of River Song’ but grew on me by ‘The Return of Doctor Mysterio)’ is sparingly used and to good effect. He seems like the kind of companion the Doctor should have in the TARDIS, as a genuine assistant and it’ll be interesting to learn of his purpose in the forthcoming story arc – as well as finding out why he has a literal screw loose and what exactly are he and the Doctor hiding in that vault – gilded in Gallifreyan geometry.

All in all, it feels hard to judge this episode on it’s own because it feels like something that needs to sit alongside the rest of the series to define its context. Rather than rebooting the whole show in single episode, perhaps the producers are playing the long game and are using the series as a whole rather than single episodes as a lure to attract new viewers.

The Doctor asks Clara a question in new teaser trailer

UPDATED: First look at the official poster for ‘The Day of the Doctor’