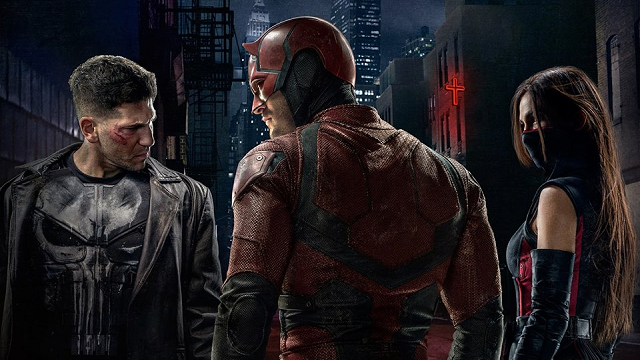 Spring rolls around, and with it a return to the Marvel Media Universe (since Cinematic Universe feels utterly redundant in these days of SHIELD, Carter, Jones, Cage, Damage Control et al).  After the brilliance of the first Daredevil run caught everyone by surprise, with it’s perfectly judged combination of brutal violence, smart storytelling and clever updating of the character, brushing aside the cobwebs of Batfleck’s ill-remembered film.

Since then, of course, we’ve had Jessica Jones, bringing Brian Bendis’ Alias comic to the small screen in fascinating fashion, plus introducing Luke Cage in seemingly perfect fashion to the MCU.  Now, with Iron Fist’s casting and show runner now confirmed, and Jessica Jones season two (and Luke Cage, who’s teaser dropped as a surprise bonus at the weekend) appearing on the Defenders-coloured horizon, both the element of surprise and the chance of underplaying the return of Daredevil have long since been lost.

Series two takes the classic sequel approach, building on the successes of the first run but making everything bigger and bolder. In doing so, it feels a more impactful – literally, in the case of the fight sequences – set of episodes, but it also misses the sense of claustrophobia that having Daredevil work within a ten block radius brought.

We’ve a wider cast, too, with the much publicised debuts of Frank Castle and Elektra Natchios to Marvel’s live-action playground, along with the return of Scott Glenn’s stick. We’ve also a handful of key characters from the first season making surprise returns, alongside a couple of surprise cameos from elsewhere in the MCU.

Indeed, in the same way that Iron Man was about launching the MCU and Iron Man 2 was starting the road to Avengers, Daredevil season two – having got all the set-up work out the way last year – feels like it’s starting to put the key bits in place for Defenders.  Two important plotlines are left unresolved, one of which feels like it has the scope and scale to require more than just Matt and his Halloween costume to resolve.  The multiple cliffhanger endings also clearly pave the way for Daredevil season 3, if Netflix decides to go down that route – and one would imagine it’s already a done deal.

Against the backdrop of a bigger story involving the Hand and a mystical weapon it’s gearing up to unleash upon the world, Daredevil season two unfolds with a number of smaller mini arcs, loosely tied together.  We have the gang warfare of Hell’s Kitchen and the Punisher’s emergence as a response to that, Nelson and Murdoch’s ongoing feud with the District Attorney’s office, Elektra and Matt’s complicated relationship – and how Stick fits into all that. At the core of all this though, is a debate, and a timely one at that.

Daredevil occupies a similar moral space to the forthcoming Captain America: Civil War – namely asking quis custodiet ipsos custodes, or who watches the watchers (as opposed to who watches the Watchmen, to which the answer is, as with all Zack Snyder films, nobody with any fucking sense).

Running through its core is the debate over what’s acceptable behaviour for a vigilante, with Castle and Murdoch representing opposite ends of the spectrum, and within that whether it’s acceptable for vigilantes to even take the law into their own hands in the first place.

One problem with this, though, is how much it exposes how much the Marvel Netflix Universe is, if not divorced from the Marvel Cinematic Universe, then at the very least having a prolonged spell of separation and possibly court-mandated couples counselling.  Because the debates, be they between Daredevil and Punisher, Matt and Foggy, or prosecution and defence within the confines of the court, don’t take in to account the fact the Avengers live just down the street.

Elektra sits somewhere in the midst of this debate – and it’s interesting charting how Matt’s attitude towards crime fighting changes the more he’s exposed to her and her approach.  Facing the Punisher keeps Matt on a high moral ground, even if it’s a decidedly shaky one at times – with Castle’s precision preaching of the end justifying the means at odds with Matt’s ‘thou shalt not kill’ view, something played out in dramatic fashion in a rooftop confrontation taken heavily from the comics.

The return of his old flame muddies the waters though, especially with the new backstory created for the character in Daredevil, which ties her more into the War, Stick and the Hand, and paves the way for her playing a more important role at a later date. As Matt transitions out of the Punisher storyline and into the Elektra one, his moral viewpoint changes, and it creates an interesting twist to his previously devout approach.

The bigger, bolder approach to season two extends to the fight sequences, which extend on the brilliance of that famed corridor brawl in the first run, and expand that further – not least an amazing sequence, seemingly shot in one take, that sees Daredevil working his way down a staircase, taking out bikers on the way down.

The fights, and indeed Daredevil’s whole world, feel more brutal time around, with Matt and especially Frank showing the scars of their bloody scraps across the series.  But that expansion also leads to fight fatigue.  As the Hand storyline unfolds, we get an increasing number of ninja battles to the point where it almost becomes farcical.  The staging of them, especially as Matt descends underground, is never less than excellent but at times it feels similar to the ongoing problem Arrow has – each episode needing to find some variation of a multi-person punch-up in a warehouse to justify itself.

If anyone suffers from this expansion of the storylines and cast, it’s poor Elden Henson’s Foggy Nelson, largely sidelined over the course of the season to being angry at Matt and appearing in court. It’s a shame for the character, given the scenes of Cox, Henson and Woll together last year were so enjoyable.

That said, the way it’s done feels deliberate – when you watch, it is notable that Foggy is the one who gets all the interaction relating to the wider Netflix universe, to the extent that it seems obvious he’s going to be in Jessica Jones series two, and that he – as much as Claire Temple – is going to be an important bridge to bring the Defenders together.

Even with less to do, though, Henson’s performance is never less than great.  In fact, there’s not a duff performance in the show, with Cox managing to salvage some unfortunately underwritten and clichéd stuff to make it work, while Deborah Ann Woll builds on the brilliant work she did in the first season as Karen’s tenacious belief in doing good sees her land Ben Ulrich’s old job by accident. Good luck, kid, it’s not like print journalism jobs are particularly long lived these days…

Meanwhile kudos to Jon Bernthal, whose turn as the Punisher is jaw-droopingly good. The graveyard scene in episode four, as Frank tells his story to Matt, is one for the awards showreel, and it’s clear the producers have big plans for the character.

Watching Daredevil’s second season feels like reading a comic book in trade paperback format. Binge watching it means we can soak in the whole story in one go, take in the wider scale of the story, but it also renders the cliffhangers less impactful when you can just turn the page, or fire up the next episode instantly. The smaller scale arcs of Daredevil season 2 don’t actually reward binging so much as the first, which unfolded at a pace designed for one-go consumption.

The second season swings wilder and doesn’t perhaps land as many successful punches as the debut run does, but the punches it does land feel bigger and stronger than before, and those that land feel like they’re going in a new direction – one shaped by a giant hole in the ground…

Next up, Luke Cage this September.  The ball’s properly rolling now.

The Enterprise is ordered to participate in a War Games scenario in order to assess the crew’s readiness for a Borg attack.

And so, with much fanfare, arrives the latest addition to Marvel’s increasingly inaccurately named Cinematic Universe.