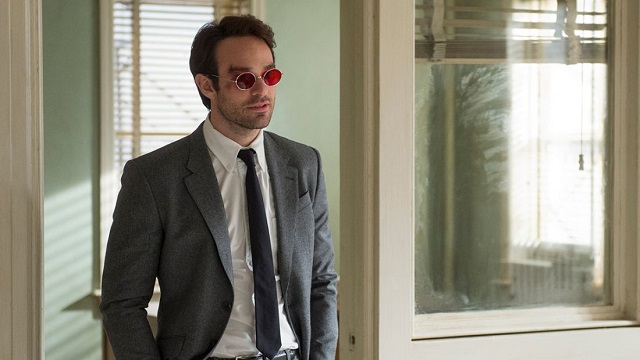 And so, with much fanfare, arrives the latest addition to Marvel’s increasingly inaccurately named Cinematic Universe.  Daredevil joins Agent Carter as the next stage of the MCU’s spill-over onto small screens, as Netflix – rapidly occupying the same space HBO used to in terms of short-form US drama series – enters the superhero game with a return to TV for Matt Murdock. Last time we saw Daredevil on the small screen, 25 years ago, he was second fiddle to an increasingly shaky Incredible Hulk, and played by Street Hawk in a pair of black pyjamas.  Meanwhile the least said about the character’s last big screen appearance the better.  So how does this new approach, under the guidance of two of Joss Whedon’s lieutenants, fare?Daredevil occupies a curious place within Marvel’s on-screen universe.  It clearly still takes place within the world of the Avengers, yet beyond a couple of references to the Battle of New York and a throwaway joke about Captain America, is very much self contained. This is still the MCU, but it’s a shared universe only in the same way Lou Grant co-exists with Rhoda.Rarely, in fact, does the action even stray outside the confines of the two square kilometres of Hell’s Kitchen, a district of post-Avengers New York still recovering from the Chitauri destruction. That geography is coupled with the story unfolding over a short space of time.  As a result, Daredevil’s New York is a claustrophobic, cloying chaos rather than the shiny big expanses of the films, or comparable TV shows such as Arrow.

That final connection is perhaps the most pertinent. In terms of superhero action, this feels far more like Arrow than Agents of SHIELD, only with the violence dialled up to 10. Claret is spilled, regularly and in substantial quantities.  People get hurt, and they get hurt a lot.  We don’t get to see the series’ take on the iconic Daredevil red suit until late on, meaning Matt Murdock spends much of the series fighting folk clad only in a lycra gym top and jeans, which offer just about as much protection from knife wielding maniacs as you’d expect.

The violence is choreographed in spectacular terms – one sequence from the end of episode two, in particular, is genuinely breathtaking in its confidence.  It feels like the producers have taken lessons from the stunt team on Arrow on how to stage these kind of fights to get maximum bang for their buck.  Instead of flashy visual effects, invisible planes and CGI laser bursts, this is a show largely bound by the laws of physics – albeit hyperrealised ones.. The one glimpse we get of Matt Murdock’s sensory-driven concept of the world is fleeting, and rightly so. Whizz bang pop effects would look horribly out of place here.

But what’s interesting too is how much Daredevil feels informed by contemporary crime drama as it is by the recent superhero origin trend.  Yes, we get the story of Matt Murdock, blinded as a kid and now battling crime with his super senses, but this is what The Wire would feel within a world of superheroes.  The show deals with the politics of organised crime and the physical, visceral impact of violence and corruption.  There’s no super villains – just different groups with money and influence looking to get more money and influence by means of coercion and corruption.

You get a sense of there being no truly good people in this world, with the possible exception of the local priest (incidentally, just when are they going to do the Daredevil in Glasgow On Old Firm Day story…?).  Even our heroes are burdened by many flaws, leaving them with ever more moral compromises to make.  Perhaps that’s why when we see Wilson Fisk’s wardrobe, it’s not the traditional white coat of the comics but a huge array of suits, all in varying shades of grey.  Either that, or he and Vanessa enjoy a far more energetic romance than we see on screen.

This Fisk is a monster of circumstance – a man who responded to bullying as a child with an horrific act of violence for the right reasons, but who saw his life and his soul broken as a result.  D’Onofrio plays him as an overgrown adolescent – socially awkward, almost playing at being what he thinks a respectable grown-up should be, and capable of moments of sweetness as well as utter destruction.  Yet he’s a man whose orbit corrupts all who come into it.

Bubbling away in the background is what looks like the start of the Defenders arc, which hints at something mystical involving the Far East – what odds a Sherlock Cummerbund cameo popping up along the line?  No post-credits sequence reveal here – the seeds are being sown throughout the plot and seem to suggest Hell’s Kitchen may well literally earn the first part of its name.

Charlie Cox as Matt may be the headline act, but Elden Henson takes a part which could easily have been the comic relief and turns Foggy into a dogged, charming bloke – of all the characters in Daredevil, his is the most honest and the least compromised. Indeed, while Matt’s out getting punched in the face every night, Foggy does much of the real hero stuff – saving pensioners, investigating crime, giving impassioned courtroom speeches.

Most fun to watch, though, Deborah Ann Woll’s turn as Karen Page, the victim turned office secretary turned investigator.  Woll’s performance spins on a penny – much of the time Karen appears to be channeling the West Wing’s Donnatella Moss in terms of quirky charm and banter with Foggy, but Woll switches effortlessly to show real darkness as hints of her shady past begin to surface.  If anyone’s the real star, and driving force, of this version of Daredevil, it is Karen.

The best thing about Daredevil though is the confidence it gives you in them doing the rest of the Defenders stories in the right way.  The core subject matter for AKA Jessica Jones, the next show, is something that could be horribly exploitative if done badly, or feel weak and soapy if handled like SHIELD.  Yet the gloves-off approach of Daredevil, and the Netflix format’s benefit in pacing, gives real hope that we’ll see the story being told in a truly mature, rather than just TV-MA, way.