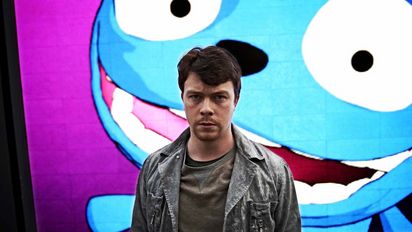 RECAP: Down on his luck comedian Jamie plays Waldo, a talking comedy cartoon bear used to ridicule celebrities in a prank segment of a chat show. After humiliating a prominent politician, his producers see the potential to expand the Waldo franchise and enter the character in a bi-election, but could his popularity change the political landscape forever?

REVIEW: As with the other episodes of Black Mirror this series, ‘The Waldo Moment’ strongly focuses on an individual. Daniel Rigby’s performance as Jamie Salter is effective in portraying the mixture of self-loathing and cockiness that makes a stand-up comedian.

His motion capture cartoon character of Waldo the blue bear is a pretty unsophisticated creation and you easily imagine something like that on BBC Three among all the other hilarious comedy you can find there. The concept of humiliating a celebrity acting in good will in a fake environment isn’t so far away from Brass Eye, and Brooker originally came up with this idea when writing Nathan Barley with that show’s mastermind Chris Morris.

Waldo comes to political prominence after humiliating experienced Tory candidate on the show. When  Liam Monroe then stands for a Conservative safe seat, producers see it as a great opportunity to put Waldo on the big stage and follow him around for comic effect. Monroe’s main candidate is an ambitious young Labour candidate Gwendolyn Harris (Chloe Pirrie) who has a one night stand with Jamie before breaking his heart as she is unable to talk to him during the campaign.

The defining moment for Waldo comes when he is invited to join a student debate and Jamie’s rage makes Waldo actually say something. This is in contrast to political archetypes who are there to play the game being the smug upper-class male and the go getting young female, out to make herself known but not to win. He exposes the deep rooted cynicism within modern politics. Waldo doesn’t say anything particularly groundbreaking but it would probably get a round of applause on question time. When that video goes viral, producers realise they can motivate the apathetic majority.

Perhaps the main problem with this episode is that aside from that outburst, Waldo doesn’t say anything except knob jokes and it’s hard to see why something so obnoxious can be so appealing to the public at large. The point being made is that the political system is absurd and the internet era is raising an idiocracy who would rather interact with a cartoon than the political system. It’s a reasonable point in many ways but as a paid up member of the public, I can’t help but feeling I’m better a little insulted. While it might work in a bi-election that the mysterious “Agency” feels Waldo can be used as a global political entertainment tool seems to be stretch.

Similarly, the final scenes set in a police state Waldo controlled future are powerful but so distant from the rest of the episode it feels like a twist for the sake of it.

The episode is at the most effective when its focussed on the protagonist. When Jamie snaps and tells the public Waldo to vote for a real candidate, it’s the strongest moment in the episode and it feels like a real person taking a stand. The message is reminiscent of Dennis Potter’s from Vote, Vote, Vote, for Nigel Barton. It’s a direct plea to the public to vote because it matters.

This may not be perfect television but at the very least, Brooker is trying to say something. That’s surely worth a round of applause.

We reach a controversial chapter in the history of Star Trek: The Next Generation

New animated promo for In the Flesh series 2

Can we avoid the second uprising?

The trailer is here for Black Mirror series 4

Black Mirror, Charlie Brooker’s dark anthology series has gained a far wider bigger audience, as well as a bigger budget since transferring from Channel 4 to Netflix. It also doubled its episode count and series4