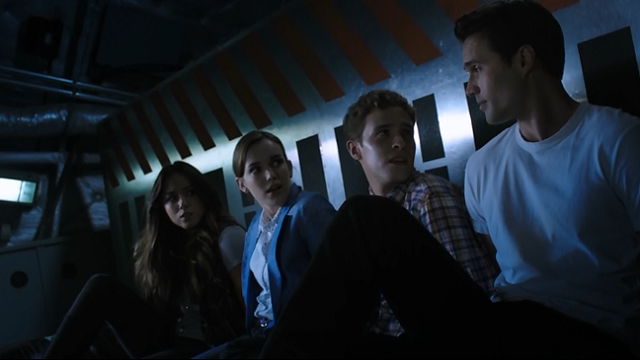 SYNOPSIS: The team head to Peru to investigate an ‘8-0-4’ otherwise known as an artefact of unknown origin, just to prove this isn’t going to be a freak of the week kind of show. It turns out it uses Teseract technology like those HYDRA weapons just so we can tick off that reference on your Avengers bingo card. Coulson meets an old friend in the shape of Comandante Camilla Reyes who is in charge of the local military. They come under fire at the hands of rebels and both SHIELD agents and military personnel leave in the plane to head to a secret base. However Reyes decides to seize the plane in order to gain the artefact. Can the SHIELD team work out how to work together to save the day? Sure they can.

REVIEW: When is a bottle show not a bottle show? This episode is technically global in scale but most of it is set on board the standing plane set. Peru never feels much like Peru and there only seems to be about 20 square feet of it. It is good to utilise your standing sets as they’ll become as iconic as the characters if the show runs. However these sets, or at least the way they are being shot, just don’t feel that iconic. The whole plane feels like it’s just a redress of an Air Force One set. It should be big and bright and Marvel but it all feels rather generic. Think Star Trek and the bridge or the Enterprise comes to mind and even from Whedon’s back catalogue the interior of Serenity perfectly captures what a spaceship should be. This set lacks simply lacks character.

Speaking of lacking character, the leads still aren’t exhibiting much. The show seems to have the same problem as Stargate Universe which had a cast made up of young beautiful people supported by a couple of veteran character actors. After around 10 episodes that show started to find it’s voice but a network audience isn’t going to be that patient. There needs to be some more interesting dynamics and revelations or if the writers are unable to find anything interesting to do with these generic characters, shift the focus to May and Coulson.

This week the team learn that even though they have different strengths and personalities, if they work together as a team they can really achieve something. Really? It might be a new show but these are experienced writers and this felt hokier than early Torchwood or even worse, a teen drama that wants to send out a positive message.

The revelation that Skye is still working for the Rising Tide isn’t particularly surprising given that she’s such a blank slate and we haven’t yet had reason enough or time to care about her but hopefully this will be the beginning of building the show’s own mythology. While it’s nice to name check HYDRA and Tony Stark it’s a bit of a cheap trick and will soon get tired.

The final scene is the most fun thing about the series so far and it’s intended to be a bit of a joke. Getting Samuel L Jackson in to cameo as Nick Fury is quite a coup and that scene displays all the knowing humour that you would hope for from a Joss Whedon show. If they use that tone as the template for the show then things will surely get better but in this episode, it’s too little too late.

Andrew, James and Alex discuss the first season finale of Star Trek: The Next Generation

Jonathan and Polly settle into village life with hilarious consequences. Not really