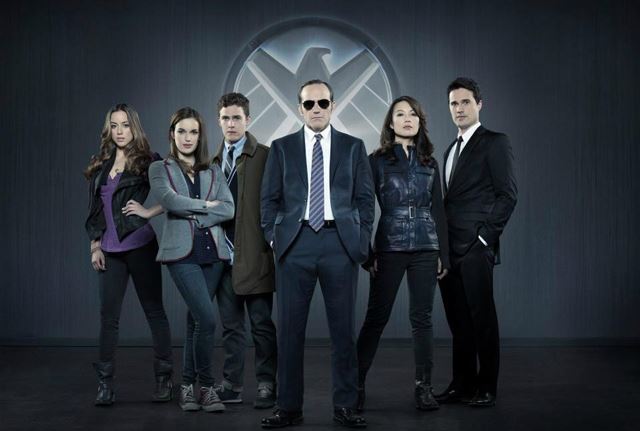 SYNOPSIS: Resurrected following the events of The Avengers, Agent Phil Coulson puts together a team made of the best of the best in order to track down new superheroes. This week they investigate an unemployed single father who miraculously rescues a woman from a burning building.

REVIEW: If this were a Marvel Cinematic Universe film you might say that it lacked the spark of the previous outings and doesn’t find its voice in the same way that the other projects did. By necessity this is a smaller scale and lower stakes corner of the MCU and while this might in time become an interesting playground, right now it all feels like playing with the B team.

This is clearly an ensemble show but every ensemble needs a narrative focus. It’s unclear at this stage if there’s actually a lead. Clearly it should be the outsider Skye and while there are hints she is supposed be playing this surrogate viewer entering the world of SHIELD for the first time,  too much of the story from inside SHIELD. Getting access to this new world should be as exciting as a new companion in Doctor Who entering the TARDIS for the first time. It should be a life changing moment where the impossible suddenly become reality. Everything here seems a little too matter of fact. This is a workplace where people deal with superheroes everyday and that might be dull for those used to it but as an audience we need someone to make it a world of wonder.

That’s not to say that there’s anything particularly bad about this pilot. The cast, from their limited screen time seem decent enough. Clark Gregg is an engaging presence and unlike any other boss character on television. Ming Na Wen is a strong and distant with a dark past. Brett Dalton plays Handsome Leading Man with aplomb and similarly Chloe Bennet’s performance as Quirky Genius Hacker Woman is everything you’d hope for. They even do that repressed sexual chemistry that audiences demand. As Fitz and Simmons Iain De Caestecker and Elizabeth Henstridge do that impossible-problem solving charming geek act wonderfully. They all have their moments but will require the time a television show provides to really make the characters and their relationships stand out.

As you would expect most of the characters talk with Whedon’s trademark witty dialogue and there are plenty of decent lines to elevate the lines from the ordinary.

As the guest superhero of the week J. August Richards is sympathetic and the show actually has something to say through his character about being an ordinary man in a world full of heroes. It’s here that the show really shines with superpowers acting as a metaphor for the privileged 1%. More of this would be welcome in future.

There’s also plenty of effort to tie this into the existing MCU with a cameo from Cobie Smulders as Maria Hill and name checks for Gamma radiation, Stark Tower, Super Soldiers and Extremis, Black Widow and of course the Battle of New York and the Avengers.

With a new show from the man who created Buffy the Vampire Slayer and Firefly, you might hope for something more challenging even if it is aimed squarely at the mainstream. The chances are that over time Agents of SHIELD will develop more of an identity but there needs to be more effort to bring in a new audience to the TV superhero genre rather than assuming it’s already there. The ending is gloriously silly though. Overall it’s a safe and unspectacular pilot with plenty of potential for growth.

HE HAS RISEN: Clark Gregg’s Agent Coulson died in The Avengers but here he is alive and well. He explains that away as having his death faked by Nick Fury and was sent to Tahiti to recuperate. However Maria Hill indicates that’s not the true story. So he’s either been cloned; resurrected with alien technology; he’s a robot or most likely something nobody has thought of yet.

THE WHEDONVERSE LIVES: When Joss Whedon finds an actor he thinks is talented, he’ll sometimes invite them to his new projects. Here J. August Richards who spent just over four years on Angel is the leading guest star. Also present is Ron Glass from Firefly and Serenity. Clark Gregg with whom Whedon first worked on The Avengers also appeared in his adaptation of A Midsummer Night’s Dream

SIMMONS: I’m not Hermione, I can’t create instant paralysis with that

WARD: There are two ways we can do this.
SKYE: Is one of the easy way?
WARD: NO

WARD: She’s a groupy. All this hacking into SHIELD, tracking powers, she might as well be one of those sweaty cosplay girls hanging around Stark Tower
SKYE: What?! I would……it was one time.

DEBBIE: This is disaster.
MIKE: No, it’s an original story.

Opening scene released for Marvel one shot ‘All Hail the King’

Who is the real Trevor Slattery?