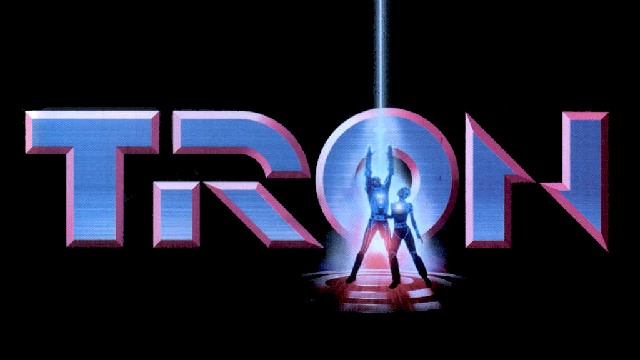 TRON is, essentially, the epic tale of an antivirus program on a mission to defeat a malicious computer virus with the help of a wisecracking programmer.In today’s market this would be a tough pitch to sell.

In 1982 the audience weren’t really willing to buy it either, but for very different reasons. This was a time before the internet and even before the home computer. The internet and home computers were a long way from becoming reality. The film was green-lit based on the popularity of first generation videogames arcades where gamers would go to shoot two dimensional blocks with other two dimensional blocks.

TRON imagines a world where computer programs are alive. They inhabit a cyber society obeying the commands of their gods, the users. These programs are plagued by the evil Master Command Program who forces them to play violent games in order to obliterate their code and steal their secrets.

We enter the world of the computer through the eyes of Jeff Bridges’ Kevin Flynn – a renegade computer programmer and games arcade owner. His impetus is to find evidence that software giant ENCOM stole his computer game designs. Having broken into his former employers’ he finds himself digitised by a giant laser and sent into the virtual world.

Here he meets square-jawed and slightly dull hero program Tron, played by Bruce Boxleitner. Alongside Yori, a virtual version of Flynn’s ex- girlfriend, this happy band go on a mission to bring peace to the virtual world from the terror of the Master Control Program.

Many of the ideas in TRON were most prescient. The idea that each real world character is represented within cyberspace foresaw avatars and online gaming. Cyberspace acting as a microcosm for society was an incredible notion, long before everyone began social networking. The Master Control Program even seems like a smart worm virus as it hacks into major corporations despite the lack of international network at the time.

The visuals are still stunning. While computer generated images had been used in a limited capacity since the seventies, TRON was the first film to build a world. The techniques of the time meant that this world was designed from basic shapes. Rather than try and work around this the filmmakers embraced the limitations creating a stunning three dimensional and highly stylised world using a combination of animation, CGI, impressive sound design and human performance.

The Academy banned TRON from getting an Oscar nomination for special effects as CGI was not recognised as a credible technique. Where TRON laid the groundwork, Avatar gained the awards.

The techniques used to film TRON were decades ahead of their time, closely resembling those used for modern day motion capture. Despite this, each cell had to be painstakingly put together from several plates to create the unique visual style.

While the visuals are great the performances are variable. Jeff Bridges is likable and charismatic while Bruce Boxleitner is just there. Love interest Cindy Morgan fails to make much of an impact as Yori but manages to look good in glowing lycra. As unethical ENCOM boss Ed Dillinger, David Warner is on fine form as a conniving British bad guy and his cyber counterpart.

If you strip away the computer world the plot is a rather conventional and a, occasionally unfocussed, journey film, but at 90 minutes doesn’t outstay its welcome. The opportunity to explore the computer generated world makes it highly watchable.

TRON’s failure to set the box office on fire scared Hollywood away from computer generated imagery for many years. It remains a curiosity of the Disney stable, from an experimental phase in Disney’s history.

Except now it become the foundation for a new franchise. Christmas 2010 sees the release of TRON: Legacy. This is not a remake, but a sequel with Jeff Bridges and Bruce Boxleitner both returning. The film has a blockbuster budget and the full power of Disney’s marketing team.

It is a bold move to commit a large budget to a sequel in the current trend for reboots, especially given the first film was so long ago and gained only a moderate following. Original director Steven Lisberger created an incredible world which was beautifully realised. Perhaps the world has now caught up with his vision and TRON can be more relevant now than it ever was then.

The audience is now literate in the world of computers and, as they become an increasingly vital part of our lives, perhaps it is time for cinema to take us on a journey into their souls.

TRON found a cult following on home release, now Disney will find out if a cult can become a phenomenon.

Are you ready to enter the exciting world of the computer? There are motherboards and everything.

Seventh Son, purporting itself to be the first in a series of films based on YA series The Wardstone Chronicles, just hit the screens in the UK