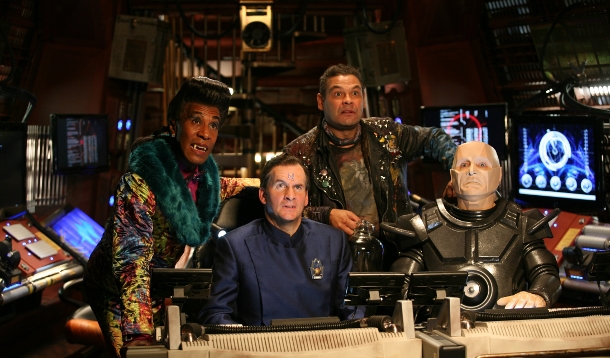 There is no news regarding Red Dwarf XI. We probably could run the piece at any time but since a number of sites decided to report that there was in fact news, now seemed as good a time as any to run it.

It all started when Kryten Actor Robert Llewellyn decided to write a post on his lovely blog to keep fans updated on the progress of the new series, although at the same time saying that there really wasn’t any progress but there was good will involved from all the cast, creator Doug Naylor and UKTV who showed the last two series on their channel Dave. Using the phrase “We are officially making another series” might imply it’s more official than actually it is even though everything else he said vagued that up quite a bit.

Despite this rather innocuous update many geek and science fiction sites began posting news that Red Dwarf XI was a done deal (like here and here)leading to Mr Llewellyn removing aforementioned post most likely following a slightly narky phone call from Grant Naylor productions.

Anyone reporting such events should bare in mind a number of things:

1. Check your sources. A blog post isn’t really an official announcement of anything and one man saying something, even though he may be one in the know, doesn’t make it true. For example you could ask executive producer Doug Naylor on Twitter and he might say something like.

Getting tweets claiming Red Dwarf XI is commissioned. Not true. Not yet.

2. The cast have previous form of making premature announcements about such things and often it takes months or even years before they actually happen, if they happen at all. It’s very nice they want to work on the show but nothing is official until it is.

3. When it is and “official announcement” you’ll really know about it as production company Grant Naylor and Dave will make a massive song and dance about it. Most likely there will be a press release or even a conference. There might even be cake.

Ultimately even though good will is there, no contracts have been signed either between the channel and production company nor with the cast. The cast is reasonably complicated to get together at the one time with Craig Charles full time in Coronation Street, Danny John Jules spending half the year in Guadeloupe filming Death in Paradise, Robert Llewellyn writing novels and Chris Barrie polishing his Triumph TR2.

After the success and potential shown by Red Dwarf X, we hope there will be a new series sooner rather than later but until it’s actually announced, there’s little point in getting excited about it.

Rimmer said lots of things in Red Dwarf. This is one of them.

THE GARBAGE PODCAST: SERIES X PREVIEW With the first full series of Red Dwarf in over a decade nearly upon us, Alex and James discuss Series X and talk through the upcoming episodes. There are