It seems rather fitting that this is my first article since I’ve relocated ‘Down Under’ and become the ‘Overseas Correspondent’ for The Spoilist. The idea for this came about last Monday night. I was sitting in front of the TV, ‘enjoying’ a Neighbours 30th anniversary documentary special. Yes, that soap that the UK went batshit crazy for in the late 80s and early 90s celebrates its 30th year this week. Think about that for a minute – 30 years! The Aussies have been watching the trials and tribulations of the residents of Ramsay Street for the same amount of time the Brits have been suffering the seemingly endless misery of the residents of Albert Square in the BBC’s laugh a minute soap EastEnders.

Here’s a trip down memory lane for you:

While I was watching the documentary various stars from the show popped up giving their thoughts on the show and the impact it had had on their lives, both professionally and personally. One notable absence for me was Alan Dale, who played Jim Robinson, the head patriarch of the Robinson clan, and arguably one of the show’s most popular characters. I tweeted my thoughts on this, just for a joke:

There's a Neighbours 30th anniversary documentary on and there's not been 1 mention of Jim Robinson! #justiceforjim

I’ve always been a fan of Alan Dale, I remember mercilessly laughing at this performances during the show and thinking his acting wasn’t the best. For some reason though, Jim Robinson was my favourite character. I thought that it was a travesty that he wasn’t asked to take part in the documentary. (When I looked into it, it turns out that he had a falling out with the producers over pay which is why his character was killed off). If you want to relive that, here it is, along with its unsubtle The Godfather tribute which is strangely fitting since Jim was the ‘Don Corleone’ of Ramsay Street:

When I sent my tweet I wasn’t prepared for the conversation that it would spark.  It opened a floodgate of nostalgic conversation about Neighbours and the impact that it had on our lives during the shows heyday in the early 90s. Thinking more about this made me realise that Neighbours has had a real sizable impact on popular culture that is still being felt today. The popularity of Neighbours in the UK wasn’t expected at all by the programme makers and it was due to this that the show continued on. Let’s take a look at how the show influenced our popular culture. I don’t claim to be an expert and I am sure that there will be lots of things I’ve missed. Please feel free to let us know in the comments below.

Arguably the biggest name to come from Neighbours is pint sized Kylie Minogue. Her pop career has been going for nearly as long as the show has, starting off with her collaboration with 80’s Hit Factory ‘Stock, Aitken & Waterman’ (or SAW) her career in the music industry grew and grew. She is still enjoying incredible success now and it seems that the UK have really taken Kylie to their hearts.

Realising that they were onto a sure fire winner, SAW then signed up Jason Donovan to their record label too. Donovan was also very popular and the very savvy people at SAW exploited Kylie & Jason’s on and off-screen relationship by releasing their ‘timeless’ duet ‘Especially for you’.

Other stars from Neighbours that took the leap into the world of pop music with varying degrees of success include Craig Mclachlan, Delta Goodrem, Holly Valance & Natalie Imbruglia. One very memorable example of a Neighbours star whose pop career was all too short is Stefan Dennis. Dennis is the only original cast member left in the soap, he plays the villainous Paul Robinson, the character that we all love to hate. Dennis released one single ‘Don’t It Make You Feel Good’ which is memorable for one reason: it’s awful. Just in case is passed you by or you are too young to remember, here it is in all its glory:

While we’re on the subject of music, it would be remiss of me not to mention Angry Anderson’s song ‘Suddenly’ which was the theme music to one of Neighbours biggest ratings hits: Scott and Charlene’s wedding.  The on-screen nuptials of Kylie & Jason’s characters in 1989 was watched in the UK by just under 20 million people, which was more people than Australia’s entire population at that time.  Just 2 million people watched the episode in Australia.

Neighbours proved a surprising platform for some Aussie actors to launch movie careers in America. Here’s a look at some ex-Ramsay Street residents who have made the successful leap to the big screen 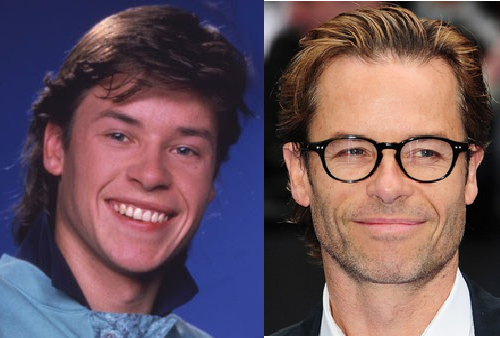 Guy played all round nice guy Mike Young in Neighbours for three years, leaving the soap in 1989.  He had reasonable success in Australia with a short lived role in Neighbours rival soap ‘Home & Away’ and a main role in ‘Snowy River: The McGregor Saga’. His breakthrough movie role in Australia came with his performance as Adam Whitely/Felicia Jollygoodfellow in ‘The Adventures of Priscilla, Queen of the Desert’ in 1996. This movie went on to influence American movie ‘To Wong Foo, Thanks for Everything, Julie Newmar!’ starring Patrick Swayze & Wesley Snipes.

In 1997, Pearce bagged his first major Hollywood film role when starred alongside fellow Aussie (and very short lived Neighbours actor) Russell Crowe in Curtis Hansen’s ‘LA Confidential’. Getting third billing alongside Kevin Spacey & Crowe was an achievement and his performance in the movie proved that he was a very talented actor.

Margot played Donna in Neighbours, leaving the soap after three years in 2011. Her first role in America was in the short lived series Pan-Am.  Film roles soon followed though with a short but memorable appearance in Richard Curtis 2013 drama/rom-com About Time.

Her massive breakthrough role came in 2013 in Martin Scorsese’s The Wolf of Wall Street playing Naomi, the wife of Leonardo DiCaprio’s main character Jordan Belfort. Her performance in the movie was excellent and surely was the springboard to more successes for her. She has recently appeared with Will Smith in the con movie Focus (2015). The film is apparently not great, but her performance has been singled out as one of the movies highlights.

Robbie has been confirmed as playing Harley Quinn in DC’s recently announced Suicide Squad movie. She seems a perfect fit as Quinn, it will be very interesting to see her take on the character. 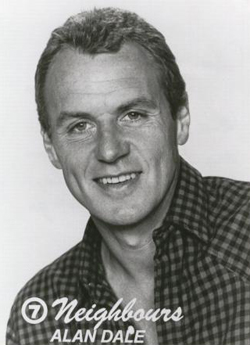 mentioned earlier in this article that I used to mock Alan Dale’s acting skills as Jim Robinson in Neighbours. I would like to admit that he has since proven me very wrong, with a string of roles in American TV & Movies that I have loved him in.

He has appeared in shows such as ER, The West Wing, NCIS, 24, The OC, Ugly Betty, Entourage and perhaps most memorably in Lost as the evil Charles Widmore.

His film roles have included Indiana Jones and the Kingdom of the Crystal Skull, Captain America: The Winter Soldier and The Girl with the Dragon Tattoo.

Thanks Alan, you rock and I will never doubt your acting skills again.

So there you have it, a brief overview of Neighbours and the impact it has had on our popular culture. Please let us know what you think in the comments below and tell us about things that I have missed out, as I am sure there are lots.