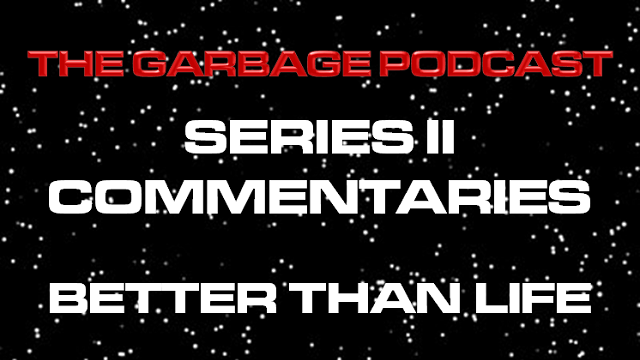 In this edition of our continuing celebration of Red Dwarf’s silver anniversary, we mark the 25th anniversary of the initial airing of Better Than Life with our latest commentary for the episode. With this episode, Series II really feels as if it is getting underway with the introduction of location filming and an opening of worlds allowing the show to expand out of it’s previous confines and move closer to the adventure-sitcom format it would eventually take on. It also sees the start of a change in the way that Rimmer is written, with a greater insight into the character’s makeup and how his childhood played a part in making him the man he was.

Is a miserable day in Rhyl anyone’s idea of paradise? What are the pros and cons of a mermaid’s anatomy? And just what uses could John Pomphrey find for a pint of Laxo? These disgusting topics and more are discussed as Alex, James and Andrew look at an episode that contains a central idea so good that it’d go on to become the basis of the second Red Dwarf novel.