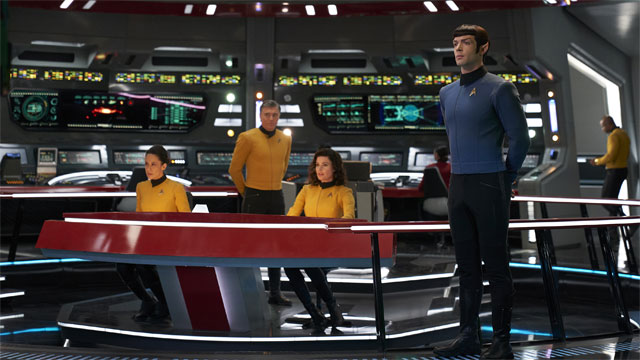 I’ve always been against prequels. There’s the usual argument about events lacking peril because you know how it’ll turn out for certain characters but that’s not my problem – any story can be well told. It’s more that the prequel is not the story. If the prequel was the best story, that’s the one you would have told first. Skipping back to a time before the main event just seems like you’re making excuses to give the audience the same thing in an earlier form in an attempt to elicit a nostalgic smile. But the introduction of Captain Christopher Pike in season 2, of Star Trek Discovery has changed my mind about all of this.

And that’s not because Discovery is a good prequel itself. At best, it makes very little sense in the continuity of the original Star Trek with the technology, uniforms, ships and sets far surpassing anything seen during the 1960s . The show itself is a strange blend of character-based melodrama, thoughtful sci-fi and extreme soapy twists. And it sort of works. But really, none of that matters.

The thing that has shown me that I need a Star Trek prequel is Anson Mount as Captain Christopher Pike. When he arrived on board at the start of season 2 in his command gold uniform it was like he had stepped out of another show. While Discovery’s crew were dark, conflicted or somehow lost, he was like a beacon of light, with a sureness and sincerity. Here was an authority figure with belief in himself and in the ideals of the Federation.

This idealism has rubbed off on the other characters and through Pike, everything has been lifted to be brighter in tone and stronger in character. While Michael Burnham remains the lead with much of the story and action centred around her, every time Pike is on screen, it’s like the camera is drawn to him – demanding his story be told. The writers have brilliantly crafted this character and Anson Mount has delivered a performance that has elevated everything.

This Pike is the best Captain since Picard

Mount has taken on a character that existed only briefly on screen and in a short time, made him the finest Star Trek captain since Jean-Luc Picard. The character was conceived as the leading man on Star Trek and was played by Jeffrey Hunter, perhaps now best known for Western classic The Searchers. His Pike was a somewhat dour, serious figure, disillusioned with Starfleet and the cost of a military life. The pilot was rejected, in part due to its tone and ‘cerebral’ nature. Had it gone to series, it’s easy to imagine that the character would have lightened, flashed that winning smile and been more fun. But you can absolutely understand why producers would favour someone with a far more obvious charisma like William Shatner.

Mount’s Pike is absolutely the same character. He doesn’t look the same but it feels like he’s the same man. Mount looks like a man out of time, a matinee idol who has started working in this new medium called television. He’s a perfect fit for a character who originated in the 1960s.

He plays Pike like a man who carries the weight of the world on his shoulders but with the stature to bear it all, and a few more strange new worlds too if need be. And he does it with a sense of duty and pride.

The production design is done

They’ve designed a new version Enterprise and it’s stunning, especially when it’s in the light. It’s a model which is far more faithful to Matt Jefferies original design than we could possibly have hoped for.

Then there’s the bridge which takes the basic aesthetic of the 1960s set and has made it fit in the Discovery universe. Sure, it’s about five times bigger, but it feels like it’s the Enterprise with the orange rail, the coloured buttons, wide navigation station and shiny practical buttons. And beyond the bridge, there are corridors with the right shapes and the right grates (hopefully there’s a man on a ladder around every corner). The turbolifts even have the twisty handles.  It’s exactly what you would create if you were making a new version of Star Trek today, so…you know, they should.

And the sounds are so beautiful. When the door opened onto the Enterprise for the first time and made the noise, it was like someone had reached into my childhood and twisted it into a lump in my throat. The bridge makes all the right noises, the torpedo launch was a sixties sting. It’s the Enterprise.

Then there are the uniforms. If you see the Discovery uniforms as the next step up from Enterprise, then these are a step up from those. The final step is Kirk’s Enterprise clothing and you can see the evolution. Basically, they’re gorgeous and bright.

When Discovery was launched and the story was focused around Spock’s family, the hearts of many fans sank. It seemed like this was territory that had been covered already and inevitably we would get another Spock. And now we have one and surprisingly it’s worked. Since Ethan Peck has been allowed to play the character in the more traditional way, he’s been excellent. You can imagine him clean shaven in a blue uniform, standing behind Pike on the bridge before looking into his scope and saying ‘fascinating’. He isn’t Leonard Nimoy and no one can ever replace his legendary performance and gravitas but since we have cast a young TV Spock, it would be a shame not to use him to the fullest.

And then there’s Pike’s first officer, Number One, played by Star Trek’s First Lady Majel Barrett in the original pilot and now by Rebecca Romijn. She’s not really had much to do this season but she’s an excellent actor who deserves to explore the character further and there’s already a great sense of trust and camaraderie between Pike and his XO. These three could form an effective triumvirate.

Cast a young ensign, and an established actor as Doctor Boyce, say Dennis Quaid who can give Pike bad advice and pour him drinks, and you’re laughing all the way to syndication.

It can be completely different from Discovery

Franchise overseer Alex Kurtzman has spoken about creating a range of Star Trek shows that are all distinct. If you’re setting a show onboard a starship during the 2250s, you might think that would be too similar, but it doesn’t have to be. Discovery is very much about the characters, their emotional journeys and how the universe seems to revolve around them.

An Enterprise show could be more about space exploration – new worlds and new civilisations. Rather than telling one story over a season, they could visit a new planet or experience a new phenomenon each week. And while there would be ongoing character development and storylines, each episode could be about something in its own right, perhaps little even morality plays or comments or aspects of contemporary society.

You can even shoot and light it differently. While Disco’s camera’s love to move and swirl, perhaps on the Enterprise things could be a more still. The space shots wouldn’t have to zoom or cut, they could be almost majestic. And while we’re getting carried away, imagine if they used an actual physical model instead of CGI?

Oh, and no swearing.

These are the voyages…

While there are other ships and space stations, Star Trek is about the voyages of the starship Enterprise and ultimately, that’s what it always comes back to. That’s how it was in the beginning and that’s what it should be now. It’s in the collective consciousness as being what Star Trek is all about ­ ­­– that’s why every movie has been about an Enterprise crew. That’s why three live action TV shows have been about a ship to bear the name. And whenever remakes and reboots happen, producers always are always asking, how can it be different from the Enterprise? That might mean setting it on a space station, in the far reaches of the galaxy or even at another time.

But then, once every decade or so, they realise the time is right to bring it back, that there’s enough distance from other Enterprise-based shows and crews to put it in the spotlight again. So you have a new generation or a reboot of the original, and now there’s a new opportunity to tell a different kind of story on board the Enterprise. We can tell the story of the man who paved the way for Kirk, the man who inspired tireless loyalty in Kirk and find out how the Enterprise came to be the flagship of the fleet.

You can bring back the icons

Studios like the familiar. People like what they already know. That why Kirk’s iconic monologue has featured in the last three Star Trek movies. But it should be back on the small screen where it belongs, spoken with the gravitas it deserves each week. Just imagine seeing the latest effects showing off the universe before the NCC 1701 goes whoosing past the screen. Then a beautifully orchestrated version of Alexander Courage’s Star Trek theme would play and our hearts would burst.

We have a captain, we have a ship, we have a crew. All we need is a mission. It’s time to boldly go once again.

In the tradition of Star Trek letter writing campaigns, you can sign a petition asking for a Captain Pike show here.

Is the Star Trek universe stagnating under its own legacy?

First Contact: The Next Generation Introcast – Encounter at Farpoint

It’s the debut of our Star Trek The Next Generation Introcast, First Contact.

Is this the most tedious episode yet?