THE APOLOGIST: IN DEFENCE OF ALIEN RESURRECTION

A few weeks ago, for no real reason, I decided to rewatch the four Sigourney Weaver Alien films. Mainly, because I love em all.

Alien and Aliens are – to me – flawless movies. Alien 3 and Resurrection – while flawed – still have a helluva lot to admire about em. That said, I refuse to accept them as part of the “official” continuity. To me, the Alien saga ends with Ripley telling Newt it’s safe to dream again. Everything else, to me, is like an edition of Marvel’s “What if?” books. Interesting speculation, and nothing more.

Watching (and tweeting about) Alien and Aliens was greeted with widespread acceptance and agreement. Even when I hit Alien 3, I discovered I had joined a tide of begrudging acceptance of the much-maligned, nihilistic third chapter (or, in my world, the first ‘What If?’). Turns out that the Assembly Cut is a much better – albeit still flawed – film, and fixes a number of problems that exist within the theatrical cut (for starters, it’s actually watchable, secondly it at least lingers on the impact of the Hicks/Newt deaths on Ripley, and thirdly, it’s got far more character development). And a lot of others seemed to agree. The flick deserved a serious re-evaluation.

Then, when I hit Alien Resurrection, something happened that I did not expect. I discovered just how many people really did not like this film.

#NowStarting Alien: Resurrection Special Edition. See how we go with this sucker

When I tweeted that I was about to start Resurrection – and that I really dug it – the sage @thedanbarrett suggested I should delete the tweet, and think about whether it was really something I wanted to publicly admit to (to his credit, Dan also acknowledged he had a soft spot for the flick). Once the opening credits rolled, and I was reminded of the sheer awesomeness of the cast (Michael Wincott, Dan Hedaya, Ron Perlman, Brad Dourif, Leland Orser to name but a few), I tweeted “How could anyone hate a film with a cast this great?”. @mistergreggles frank assessment was “easily”. @reginaroadie bluntly added “lots of awful movies have great casts. Look at Men, Women and Children

The fact is, I’d really enjoyed Alien Resurrection. The first time I saw it in the cinema, and every time since then. Sure, it has flaws (some of the casting reeks, and they seriously botched the design of the final Alien/human hybrid). But to me it was – and is – a fun movie. I certainly never felt it deserved the same contempt and hatred as, say, Grown Ups 2 or Halloween Resurrection.

Not sure if what follows qualifies as an attempt to defend the film, or just me trying to justify my often dubious taste – but here goes… my argument why Alien Resurrection is not a bad film.

First off, I’ll accept the flaws. Winona Ryder is woefully miscast, as is Dominique Piñon – a sensationally talented actor in his native France (go watch City of Lost Children or Delicatessen if you disagree). But he’s just plain wrong here. He sticks out like a sore thumb as a mercenary who can speak English about as well as he can tap dance (he doesn’t have legs, you see… so he can’t tap dance. At all). Then there’s the human-alien hybrid. HR Giger was alive when Alien Resurrection came about. But this design is so bad, I’m surprised he didn’t drop dead immediately, just so he could roll in his grave at what they had done to his once-terrifying creation.

Then, there’s what one more piece of common ground. I think we can all agree that every Alien film is unique. The first film is unmistakably Ridley Scott’s – from the casting through to the design and the execution. The second film is pure James Cameron. The third is clearly David Fincher’s vision (or at least Fincher’s vision if he was legally blind, and led by a seeing-eye dog being yelled at by Sigourney Weaver, Walter Hill and random 20th Century Fox executives as they all attempted their own imitation of Tommy Wiseau in The Room).

Which brings us to Alien Resurrection – quite possibly the biggest attempt at a cinematic course correction since Wes Craven managed to make Freddy Krueger scary again in Wes Craven’s New Nightmare.

And before anyone gets hissy, note I said “attempt”.

Sure, the (now-disowned) words are Joss Whedon’s. But, for better or worse, Alien Resurrection is Jean-Pierre Jeunet’s. It has his style, his quirks, a distinctly French feel and – most importantly – his sense of humour.

Somewhere, I read that Joss Whedon – in one of his many interviews where he distanced himself from the finished product the way the cast of Ghost Dad would now distance themselves from Bill Cosby – said that his intent was for a snappy, lighthearted romp through the Alien universe. Think some of the scares, and a lot of the patter. Joss’s gyst (which, incidentally, will be my porno name if I ever get really desperate for cash) was that Jeunet took his words and his action and did it all wrong. He said Jeunet played it straight and didn’t get his tone.

Yes, beyond the wisecracks, Alien Resurrection doesn’t have Joss Whedon’s style. It has Jean-Pierre Jeunet’s. And to me, that’s a good thing. Jeunet delivers a kooky, grotesque, unique sexual-horror-sci-fi-comedy. It has a wickedly dark sense of humour. Look no further than Brad Dourif cooing at the newborn alien-human hybrid “You’re a beautiful little butterfly”, Dan Hedaya’s utterly absurd death salute or the utterly hammy vamping of Sigourney Weaver. This film has a wickedly dark sense of humour.

It also has some great visuals and decent setpieces. The Alien jailbreak sequence works well, as does the underwater setpiece. And the camera shot down the throat of not-long-for-this-world Leland Orser is pure Jeunet – inventive, gruesome, clever and funny.

Then there’s the aborted clones. 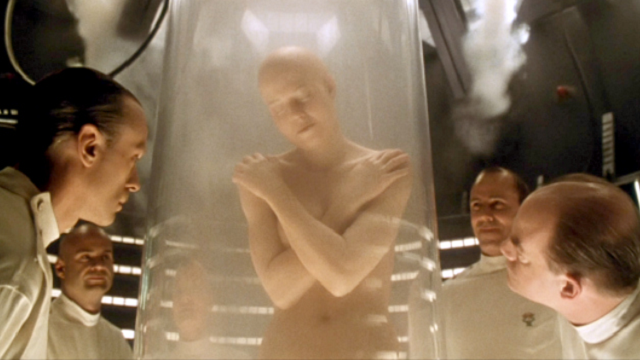 Just to break from my argument for a second… Lately, I’ve noticed every “this film is actually much better than you think it is” piece offers up some hidden metaphor to demonstrate just how brilliant the savaged film in question really is. So, in keeping with this practice, here’s my hidden metaphor discovery from Alien Resurrection. It’s really a metaphor for developing a completely superfluous sequel to keep a movie franchise alive.

Bear with me here.

Aliens was a perfect close to the story of Ellen Ripley, last survivor of the Nostromo. It ended on a note of hope with Ripley staring down her demons, destroying them and protecting the people she loved. To me, it was a perfect ending. No followup needed.

Sadly, life is never that simple for either Ellen Ripley or Sigourney Weaver. There’s always a greedy corporation out to exploit them both. And, using any desperate means necessary (cloning, ridiculous bonuses for shaving her head), they bring her back.

The greedy corporation is desperate to bring her back, or at least the element that they think made the first two films so successful… the Alien. So the Corporation goes through numerous attempts to get the Alien/movie ready, with aborted clones here representing the numerous aborted scripts.

Ultimately, they get what they’re after and decide to retain the by-product (the human element) as a curio. The Ripley hybrid, seemingly reflecting Weaver’s attitude towards Alien 3 through that film’s production, doesn’t care terribly much. She goes through the motions, doing what everyone expects without any regard for the outcome.

The only time she appears to show any real emotion is when she’s confronted with her aborted, failed predecessors. The last one begs the new, improved Ripley clone to kill her – much the same way that Weaver wanted Ripley to die in Alien 3.

Ultimately, the Corporation’s final product (the alien/human hybrid) is an unholy mess – a ridiculous, unsuccessful fusion of elements that completely fails to live up to its predecessor’s legacy.

See? It’s really a horror thriller about the horror and thrills of making a sequel no-one particularly wants to make. Also, it’s funny and clever. And dark. And entertaining.

Sure, Alien Resurrection is not a perfect film. But it’s entertaining enough, clever enough and smart enough to hold its own. And it deserves the same sort of re-evaluation that Alien 3 received. That’s my opinion, and I’m sticking to it.

Now can we just get back to focussing our hatred on what really deserves it? Namely, those two godawful Alien vs Predator movies

The Apologist will return…

The Apologist: In defence of Prometheus

Anotherfilmnerd stands up for the much-maligned prequel, before getting crushed by a stampeding herd of angry ‘Alien’ fans cos he couldn’t run sideways or diagonally.

Why Blomkamp should not be stopped. Probably

The man who loved Alien: Resurrection steps in to bat for the man who wants to resurrect Newt and Hicks. Meanwhile, Neill Blomkamp utters “with friends like these…” and shakes his head dejectedly