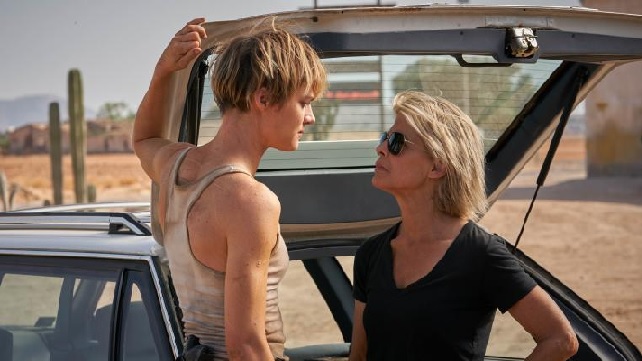 What is a Terminator movie?

The first is a genre-bending cross between a horror, police procedural, chase film with a bit of Twilight Zone-esque sci-fi thrown in. The second keeps the chase elements but ups the action and the sci-fi and throws in absolutely stunning, leading-edge visual effects. The third repeats that formula without the ambition, making it more palatable to a younger audience. The fourth tries (and fails) to expand the universe with as a war movie with two B-plots that no one cares about. The fifth tries to make a plot point of the time travel and gets tied up in knots.

Although the genre and scale changed, the story of the first three Terminator films remains pretty simple.  A killer robot sent back in time to kill a human target, who is defended by a protector also from the future, there’s a chase and then they fight to the death in the big finale.  The first two, directed by James Cameron and starring Linda Hamilton, are masterpieces. The third works, the others abandoned the formula in search of a franchise. But now we can ignore all of the non-Cameron films because apparently, they didn’t happen.

James Cameron finally got the rights back and for the first time since Terminator 2, Linda Hamilton returns to lead the cast along with original Terminator and franchise stalwart Arnold Schwarzenegger. Terminator: Dark Fate, takes it all back to basics. A Terminator (Gabriel Luna) comes back in time to kill a young woman Dani Ramon (Natalia Reyes) who is protected by Grace (Mackenzie Davis) a soldier who has been augmented with cybernetic technology. Rather than having to fight the Terminator themselves, they are joined by an old and embittered Sarah Connor, who has become a full time Terminator hunter when she’s sober, and a aged T-800 who has spent too long in the past.

Going back to basics is a good thing. There isn’t really much depth in any of these films. It looks like there is, but there isn’t. The time travel and future war are just texture but there’s nothing interesting to be explored there. Not really. The first film is interesting because it’s an ordinary person put an extraordinary situation. The second makes you wonder how a sensitive kid can become a war hero. These ideas are interesting because they explore potential, what people could be. Once they become, who cares?

Early on in this film, there’s a moment that changes the game. If you’re a fan of sci-fi franchises, it’s very much an Alien3 moment. It’s incredibly well executed in terms of effects but it also might mean you emotionally check out. It was always hard to make John Connor an interesting character as an adult. Nick Stahl did a decent enough job but after that he’s been a boring solider and some kind of weird monster bad guy. The character has been broken and pissed all over so what they do with him could be seen as bold. But if we are supposed to disregard those films, well then they’ve changed the ending of T2 and that might mean your investment goes out of the window.

Otherwise, it feels a lot like Terminator by the numbers. They’ve taken the best bits and stitched them together so it invites comparison to the other films. Luna’s Terminator plays an authority figure with reptilian air much like Robert Patrick’s in Terminator 2 but he just doesn’t have the same sinister presence. He’s got a exo-skeleton and liquid metal body, just like in Terminator 3. Grace experiences flashbacks to the war just like Reese did in the first film. There’s a truck chase too which echoes that Terminator 2 and then it dangles off an edge like in Genisys. Arnie’s Terminator even gets a payoff moment that’s basically the same beat as the finale of Terminator 2 but not half as effective. And there’s the idea of a Terminator having a life in the present day, just as in the previous film. Are these deliberate nods or is there just nowhere else to go with these characters?

And there are other action movies it feels like it’s quoting too. The parachuting car isn’t that dissimilar from a scene in The A-Team. Big fight on a plane – the Mummy did that. The action set-piece at a dam is something we saw in Highlander 2 (although luckily no one remembers that).

Happily, it moves along at a fair pace, you’ll never be bored and the cast are all great. Reyes makes a likable and sympathetic lead and Davis is a revelation with a strong physical presence. The film uses the veterans in the right way, giving them focus when required but allowing the new characters plenty of time to establish themselves. There are some good revelations and the action is decent. There’s also a harder rating than recent films which means there’s plenty of swearing but honestly, the action never feels particularly harsh. Just look at the war scenes and compare them to the Cameron films. They felt terrifying, raw and claustrophobic. Here’s, they feel like effects. In contrast, Tom Holkenborg’s score hits the right notes and quotes Brad Fiedel’s classic Terminator theme plenty. Overall, it feels like a Terminator film in a way others have not.

So it’s good. It might even be very good, but it doesn’t feel vital. It does not feel iconic in the way the first films did. It’s another Terminator film. And even though this one is open-ended, it feels like we’re stuck in a loop, telling the same story again and again while still trying to raise the stakes. There’s no fate expect that someone, somewhere will keep trying to make Terminator films. That’s fine, but where it was once innovative and groundbreaking, now it’s trading on powerful nostalgia. It’s nice to revisit old friends, but that doesn’t mean I want them to stay.