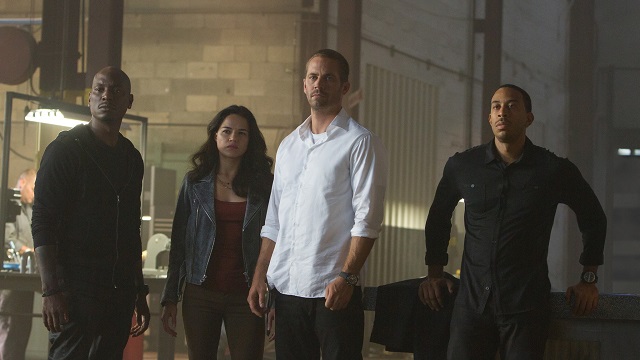 The much anticipated seventh installment of the Fast & Furious franchise is here and to keep it simple we’re just going to answer three easy questions:

Is it still Fast & still Furious?

There’s over the top, out of control, ridiculous and then there’s Fast & Furious 7. But the writers know that, they embrace that and even make fun of themselves for it. Who knew car stunts could get more surreal than Fast & Furious 6 but they can. This film is a sit-back-and-enjoy-the-ride movie, a no brain required, simple revenge story just with nonsensical stunts thrown on.

A bit of a letdown is however the fact that throughout the movie you will find yourself screaming (hopefully only in your head) “Vin Diesel what are you saying?” Luckily the plot doesn’t need any exposition and we don’t rely on the character of Dom for any out of shot info so we can guess it’s either ‘ride or die’ or probably something about family.

How did the Paul Walker absence pan out?

Well, even if they did need major rewrites and storyline changes it works out really well. You may occasionally spot that a scene includes is a Walker brother over the shoulder scene or a computer generated face but really it’s only because you’re looking for it. If you didn’t know I don’t think you would after watching.

It may not always be obvious in the adrenaline filled crashes but this is definitely a ‘Brian’ storyline. We start with a character who is bored of suburban life, one who wrestles with his adrenaline junkie demons and with who he wants to be before finally realising what he wants out of life and finding his future. This doesn’t feel like a quick rewrite to get round a death, this feels like a plot line that was always there and maybe just had to be realised earlier than planned.

For me Fast & Furious 7 is up there with some of the best film endings ever shot. It’s not unique, it’s not clever but a perfect send off for Paul Walker and where, if it was up to me I would end the franchise.

All in all you get exactly what you expect from this movie and you’re not disappointed.

Even though they’ve been pushing this family theme forever the final scenes of Fast & Furious 7 are truly the ones that show it – the future of one family relying on the breakup of another; the not so metaphorical crossroads in Dom’s life; the flashback montage; and finally driving off on different paths. All very emotional, heartfelt and sincere and yet still perfectly Fast & Furious.

How did a film about street racers and low level criminals become a mega-franchise about a team who solve international espionage problems using only cars?

New trailer and poster for Riddick

Vin Diesel returns as Riddick for the first time since 2004